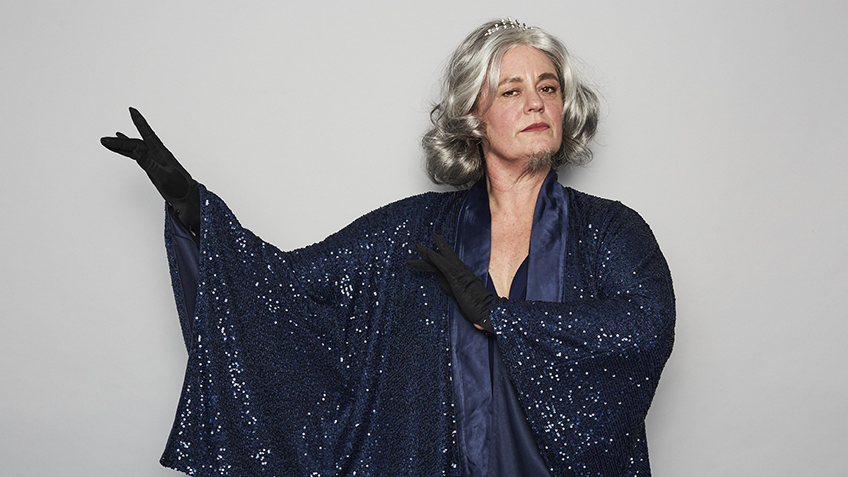 Julie-Anne Long’s Queenie Gives An Address is a subversive, challenging performance full of social comment. “Tonight, it’s all about the screen…the silver screen.”

Long is an award-winning dance artist based in Sydney. Since graduating from the Victorian College of Arts in the early 1980s, she has performed and choreographed on a wide range of projects with companies such as Human Veins, One Extra, Theatre of Image, Flying Fruit Fly Circus, Bell Shakespeare Company, Open City and Dance Works. For more than a decade, Long’s dance practice has focused on solo work.

Holding a PhD from the UNSW, Long is currently Lecturer in Dance and Performance in the Department of Media, Music, Communication and Cultural Studies, Macquarie University.

Here, Long is Queenie, an ‘undignified dignitary,’ making a special guest appearance at Liveworks this year. The address is filmed at Carriageworks. Queenie is one of Long’s Invisiblists up close, sharing this very special address as part of her larger unentitled project featured in Liveworks. The Invisiblists are women of a certain age whose invisibility in the eyes of society-at-large is both a curse and a superpower. Over the course of Liveworks, The Invisiblists infiltrate the Festival in a series of intriguing performance vignettes. Creating subtle magic, awkward moments and fleeting encounters, they invite us to question the way we think about ourselves and the people around us. Queenie begins her speech by acknowledging the First Peoples, and at times, Queenie tries to break down the ‘fourth wall,‘ the barrier between audience and performer.

For this Address, Long is elegantly dressed in blue, and for the opening sequence heading toward making the Address, she has a handbag and wears black gloves and court shoes, perhaps to some degree channelling Her Majesty. She parades slowly along one of the walls of Carriageworks. She poses, turns and waves, holding her arm outstretched as if to be kissed – but this is interspersed with sudden explosions of miming drumming.

We then cut to the Address itself, Long in a blue dress (here, the sequins are visible), with a delicate pearl necklace, a beard and glasses. The speech itself is choreographed with flowing arm movements. At times, the Address is interrupted by Queenie drinking some water. Queenie tells three allegorical, possibly semi-autobiographical tales – a woman ‘of a certain age’ reading a book about a younger woman, which prompts comments about ageism and the invisibility of older women. Another story (about ‘a friend’) follows, Queenie’s friend having complaints from the neighbours about the noise from her unit and how she responds.

The third and final story is about ‘a friend of a friend’ and examines online dating, political correctness and is a portrait of an unhappy marriage that is disintegrating. Queenie concludes by saying, “I’ll say goodnight but not goodbye. I’ll see you in our future.” We then see Long walk out of Carriageworks, having changed, with costume bags and so on.

Queenie Gives an Address is part of Long’s work for Liveworks called unentitled bringing together a meetings with Invisiblists Queenie and Bev.