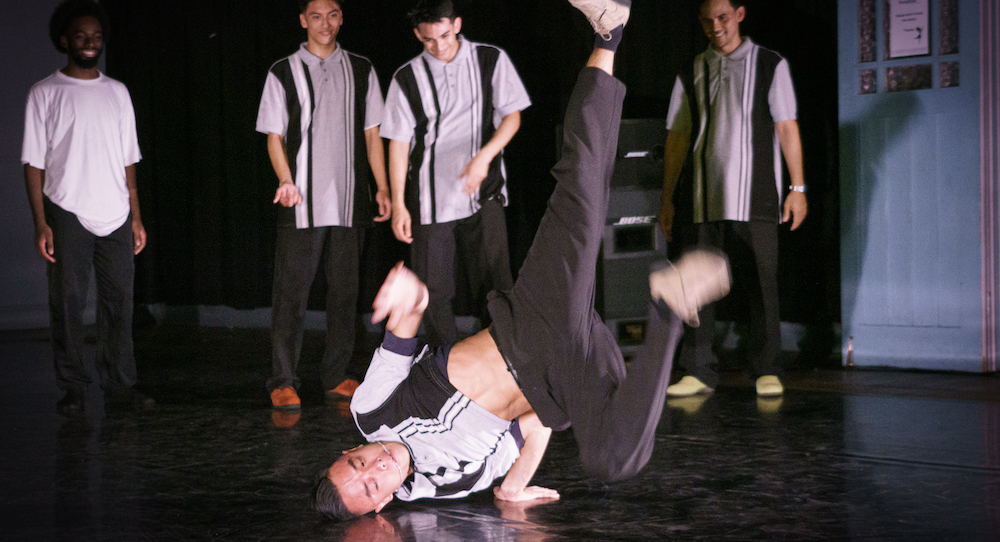 The second week of March Dance, Sydney’s festival of independent dance, marked the first time that hip hop dance practitioners had the stage to themselves at ReadyMade Works’s Happy Hour. The evening, curated by choreographer and b-boy Nick Power, was a mixed bill featuring Booyakasha, Stale Biskitz and soloist Tony Oxybel.

In other parts of the globe, hip hop artists have been performing for decades in formal theatre settings. US choreographers Rennie Harris and Doug Elkins fused hip hop styles with mainstream concert dance in the early 1990s. Since 1993, in Paris, the Suresnes Cités Danse annual festival has been a platform for hip hop choreographers to make work in a contemporary dance context. In London, hip hop theatre pioneer Jonzi D has been running Breakin’ Convention at Sadler’s Wells since 2004. However, in Sydney, which has a thriving and passionate hip hop dance scene, cross fertilisation with contemporary dance practice has been scarce or at times tokenistic.

Power’s intent to open the field for hip hop artists to be celebrated as contemporary choreographers is welcome and necessary.

Stale Biskitz, a popping crew led by Jack Wardana, lived up to Power’s title for the evening: Street Elite. Wardana’s crew is fortified by his brother Keanu, Jaya Soewito-Martin and Koh Yamada. These dancers are veterans of international hip hop competitions representing Australia at the highest level.

Wardana has steered through the culture of battles to a space in which his compositions can calmly delve into ideas about unity and beauty. His piece was like an exquisite puzzle, using multi-directional diagonal lines and intricate sequences that were folded and unfolded.

There was a startling moment when the dancers lined up perfectly and then rotated sequentially evoking a fleeting image of cogs in a time-piece — a move Wardana dubbed ‘clockwork’. Moments like this reminded me of the choreography of Trisha Brown, an icon of post-modern dance.

Wardana’s piece also referenced the early work of The Electric Boogaloos, a popping crew whose tight unisons and formation dances gained renown in the mid-1970s. I was at times also reminded of Kraftwerk with the four dancers dressed identically, apart from the colour of their shoes, looking both austere and tongue-in-cheek.

The skill and speed with which they all could articulate the hyper-complex movement language they have developed as a group was thrilling to watch. Each with a uniqueness but all humming together beautifully. There is a familial aspect to their accuracy — bound by common interest and kinship, similar to how the Bee Gees achieved otherworldly harmonies. Wardana is a purist pushing forward the aesthetics and expectations of his genre. Intriguing to me was a hint of traditional Indonesian dance, which Wardana has been exploring. I noticed a flavour of that in the design of the hands and the gracefully understated way that certain phrases were shaped and delivered. This sets Wardana’s work apart in his field.

Booyakasha is an all-female hip hop crew brimming with the talents of Shannon Campradt, Ashley Goh, Alice Tauv and Jasmine Vo. These uber-talented women from the scene appeared in over-sized sport attire, direct and emblematic. They moved with fluidity, force and outstanding funkiness, displaying an impressive range of moves. Part way through their piece, they began a scripted conversation amongst themselves, humorously critiquing one another’s musical choices as well as the dancing. I enjoyed hearing each woman proclaim her opinion. This fleshed-out their individuality and lent another layer of agency to their work. The piece started to have a theatrical context and, what I think, was a political one. The male-dominated hip hop scene, although much improved now, has traditionally been challenging to navigate as a female. Booyakasha’s performance was a dichotomy of strong in-your-face dancing, code-switching into performative self-deprecation. It could almost be a metaphor of a way of being that makes it easier to exist in a male-dominated scene. A powerful comment by a kick-ass group of artists. I think many of us can identify with that.

Tony Oxybel was a kinetic vision of style, emotion and talent. He has the astounding ability to articulate complex movement from a variety of dance forms while maintaining a nuanced dialogue between them. He played with imagery, musicality and identity, taking influences from Dancehall, Vogue and others.

Oxybel would launch into a long complicated dance phrase only to drop out of performance-mode, turn away — suddenly becoming pensive and pedestrian. It resembled the moment when a great tennis player hits the winner on a long volley and then enacts a ritual of relaxation before playing again. He would pace the stage, breathe and start again, performing another amazing feat of virtuoso dance. Oxybel achieved something unique during the evening. He made himself fully open to the gaze of the audience, looking directly at us and becoming extremely vulnerable at times. This was a generous and bold choice which rendered moments of pure poetry.

Power is modest but quietly ambitious in his efforts to bring hip hop choreographers into the independent dance community. His selection of these three dance works for Happy Hour was flawless.

Sydney’s independent dancers and hip hop community have several things in common — the pursuit of innovation, cutting edge aesthetics, and a willingness to go above and beyond for the art form. It’s high time we joined forces and began to build a 21st century contemporary dance…in the true meaning of the word ‘contemporary’.

By Charemaine Seet of Dance Informa.