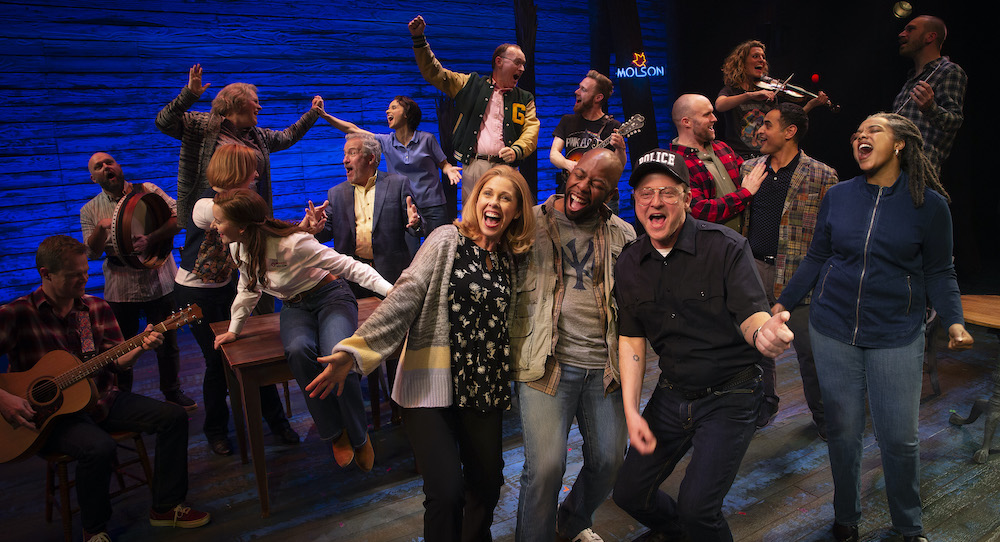 Come From Away is a musical based on a true story. Amidst the September 11 attacks in 2001, 38 planes with 6,579 passengers were diverted to the remote airport of Gander in  Newfoundland. A total of 255 flights were diverted to other airports in Canada, but Come From Away deals with the 38 that were diverted to Gander. Passengers were billeted or hosted with locals for five nights. Writers Irene Sankoff and David Hein travelled to Gander, and interviewed locals to develop their story. Each actor in the production plays local Newfoundlanders and ‘Come From Aways’, the local term for people from off the island.  This production is a return season of a highly successful run in 2019.

The musical score borrows from the Celtic traditions common to Newfoundland, mixed with instruments from around the world. Musical Supervisor Ian Eisendrath described this choice as a metaphor delivering sonically the intersection of cultures in the story.

The dancing, choreographed by Kelly Devine, also borrows from the Celtic transitions, most recognisable from the folk traditions of Irish dancing. What is beautiful in the dance in Come From Away is that it is not a dance spectacular. The performers are cast for their affinity with everyday local Newfoundlanders. For the most part, they are not highly trained dancers, which contributes to our investment in them as everyday displaced people. It also builds the charm and realistic effect of scenes in the bar where the community and the Come From Aways spontaneously commune in dance and song. Having said that, the dance sequences in this production are highly rehearsed and very slickly delivered.

This production re-opens commercial theatre in Melbourne after the nearly 12-month closure due to COVID. There are a number of resonances in the production to current events. The limitations caused by COVID are in some instances shared by the characters in Come From Away: the isolation and the distance that people are from their families in a crisis, the scrutiny of people from other places and the confinement that the passengers go through during quarantine. These resonances add a layer to an already relevant and topical story. Opening night saw full COVID safety procedures, preparation and delivery enacted – we attended and watched the performance with masks on. The opening did not lack for audience numbers even in spite of this. Hunger for live performance appears to remain, despite or perhaps because of the pandemic.

For more information or to book tickets visit comefromaway.com.au/tickets/melbourne.