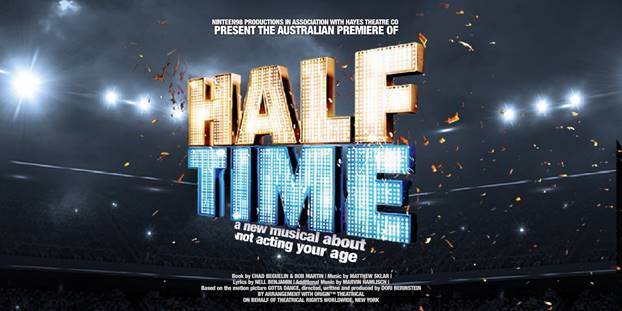 Nineteen 98 Productions in association with Hayes Theatre Co presents the Australian premiere of Half Time, a new musical directed by Helen Dallimore and starring some of Australia’s most treasured performers including Nancye Hayes AM, Stefanie Jones, Donna Lee, Wendy-Lee Purdy and more.

Half Time is the incredible true story of 10 ordinary seniors with extraordinary dreams who audition to dance at halftime for a major basketball team. Only after making the cut do they learn they won’t be dancing tap, salsa or swing; instead, they will bring down the house with a style that is entirely new to them: hip hop.

“What a thrill to be back on stage at the Hayes in the new musical Half Time,” said Nancye Hayes AM. “A show about not acting your age. How could I resist! Especially as I will be joined by some friends with whom I last performed in the original production of Chicago 40 year ago – Dolores Dunbar and Joy Miller. So many of the cast and the creative team have been colleagues, and I so look forward to working with this truly impressive line-up. Some challenges to conquer, but we will all be forgetting our age and loving it.”

“I’m thrilled to be back at the Hayes directing a show that applauds and celebrates legends of Australian theatre, not least Nancye Hayes,” said Director Helen Dallimore. “Half Time is hilarious and heartfelt, and I know audiences will love it.”

Producer Harriet Snaith added, “I am thrilled to be making my musical theatre debut at Hayes Theatre Co as a producer. I started volunteering at the Hayes in 2017, and was soon after hired as box office administrator and duty manager. The Hayes became my home away from home and launched my career in the arts. To now be back making my musical theatre debut is something incredibly special.”

The creation of Half Time began in 2008, when Tony Award-winning producer and documentary filmmaker Dori Berinstein arrived to film auditions for the New Jersey Nets’ first ever ‘over 60’ dance team, the NETSationals. Following a thorough documentation of the senior dance team and their performances, she created the film Gotta Dance, which debuted with a massively successful Tribeca Film Festival run before opening to the public in 2009.

When developing Gotta Dance, Berinstein quickly realized there was a potential theatrical life in this story beyond the big screen. Having had produced Broadway smashes Legally Blonde and Thoroughly Modern Millie, Berinstein reshaped the documentary into a narrative, musical theatre feature, and in 2015, Berinstein’s anticipated stage adaptation of Gotta Dance was renamed Half Time and premiered in Chicago.

Take the uplifting journey with these dreamers – and the young coaches who inspire them along the way – as they battle self-doubt, stereotypes and even one another for a chance to bust a move at centre court in front of the 20,000 screaming fans. Together, they remind us that in life, when the odds are stacked against you and the challenges seem too great to overcome, it’s not the end of the game – it’s Half Time.

Nineteen 98 Productions in association with Hayes Theatre Co will present Half Time from 1 April to 2 May 2021. For tickets, head to www.hayestheatre.com.au.