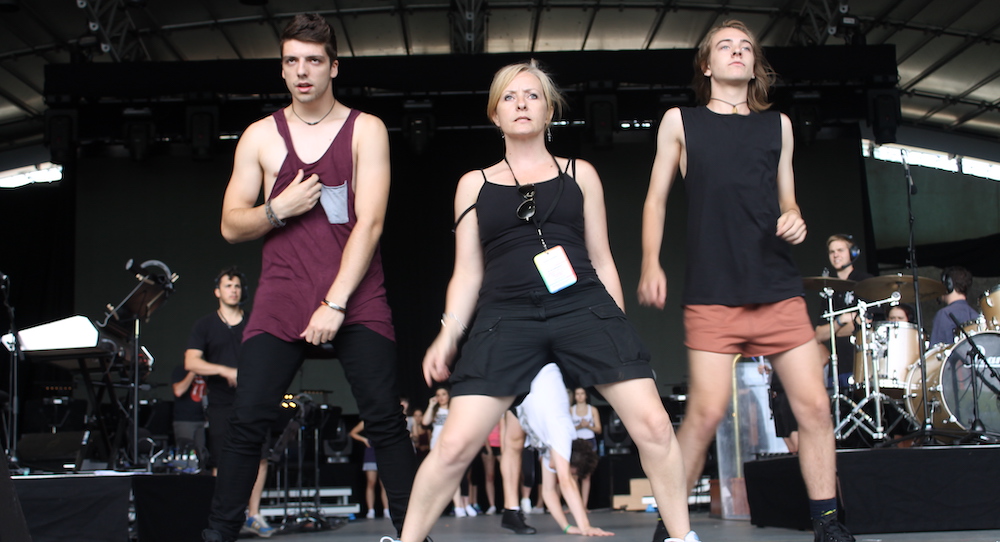 “We’re artists,” she says. “We have to regenerate ourselves all the time. So, I have no qualms that myself and my competitors will be able to handle this sort of scenario, because that’s what we do.”

It is a beautiful azure day in early December, and Kelly Aykers is in her backyard in Melbourne. Lockdown is over. There have been no reported cases for a month. Yet, like virtually everyone else in the performing arts, she has had a year that Confucius would most likely have called ‘interesting’. If ever the flexibility and creative problem-solving aptitudes of the artist were going to be useful, it was surely in the strange world of 2020.

As a choreographer and operator of a full-time dance school, Aykers was dealing with cancelled shows and a disrupted campus calendar. Indeed, she was just days away from “doing media” for a new musical, Cinderella, when the virus hit in mid-March. Moreover, a big scale Disney show she was slated to direct was also pulled.

“I think if maybe if I was in my 30s, it might have been a different scenario; but being in my 50s, I know that it will happen. The two big jobs that I lost, they will happen again,” she declares. “But I won’t lie, when they announced the second lockdown, that was a hard week for me. I almost felt like not myself for the first time in years.”

Yet, as we write, 2020 is nearly over, and the dance community in Melbourne is back on its feet and contemplating 2021.

Not far from where Aykers is in Brunswick, Jason Coleman’s Ministry of Dance in North Melbourne is prepping for huge rebound. “Plan for the best, prepare for the worst,” he states. “If you’re not planning, there’s no forward movement. In fact, we’re opening a high school next year [because] we had time to stop and really look at it and see if it’s real. So, we’re not waiting for anything.”

South of the city, in Prahran, the Patrick School of the Arts is also bouncing back. Indeed, when Dance Informa caught up with the Director of Musical Theatre, Andrew Hallsworth, rehearsals for a campus production of Guys and Dolls were already under way. Reflecting on his year, Hallsworth observes, “The prep throughout this whole year has probably subconsciously been the preparation for 2021. So it really has been a constant unknown, and I feel like right now we’re kind of just breathing again. But in the back of our head, we’re going, ‘Things might change.’”

The new and more atomised normal imposed on dance schools this year has, perhaps inevitably, created a window for a ‘root and branch’ review of training modalities. Hallsworth cites the increase in one-to-one teaching as being a real plus for students, despite the limitations of Zoom and other issues associated with distance learning. “We’ve had such a constructive year, but in really unexpected ways,” he explains. “I mean, I was thinking about how much growth they were going to achieve or not achieve because of being isolated, but because we really went down into one-on-one, they actually excelled.”

For Aykers, who prefers to keep her school at a more boutique size, the solution was to roll much of this year’s course work into 2021, rather than try to squeeze them into the laptop rectangle. In fact, looking forward, she suspects that the pandemic interruption may force a sector wide re-think. “The idea of performing arts training being this huge barn with big numbers is going to change,” she says. “I think we’re going to pull the training back in and have it more elite, a higher level for smaller numbers. That being said, that’s a good thing for us. It will lift our industry, in terms of job preparation.”

Here then, the bigger picture. For Aykers, Coleman and Hallsworth, who all straddle the worlds of education and performance, the architecture and viability of live arts in this country is core to both their creative practice and their business. As the latter notes, “I’ve got these young, budding musical theatre hopefuls going, ‘Hang on, what am I even training for, because there’s nothing?’ I have to not let them go down that path because, I believe, there will never be nothing in the arts to do, because everyone always relies on the arts to get through traumatic situations.”

Coleman is even more bullish. “I refuse to see it as a negative. I refuse to sit around and talk about how bad it’s been for us all. Okay, it’s real, it’s happened, but what can we do?”

Furthermore, he reiterates the old line about perspective, about not being consumed by the drama of the day. Dance, he argues, is not the whole world; and here in Australia, disruptions notwithstanding, a sense of gratitude is worth remembering. “People don’t understand why we bow at the end of the night,” he illustrates. “We’re lowering our heads because we’re grateful. We’re thanking you for your time and trusting us with your money and two hours of your life; and we are privileged because of that.”

However, contemplating the terrain for Australian producers and performers in the short-mid term, Aykers reveals, “The creatives are all ready to go. We’re all at the gates ready to pounce, but it’s the money men. It’s very hard to make money in theatre as it is, so now with this hanging over us, even by getting big names and big shows, they can’t be secure about getting an audience. So basically, the talk of the town is that there might be a lot of revivals happening next year and the year after. It’s a real shame because the table was turning, and producers were starting to open their doors to getting involved in new shows.”

Although the news media, political opportunists and others have tended to focus on drama and doom, history and calm reflection show us that these moments pass. They are uncomfortable, they are undeniably unfair, and they do deal hammer blows to some. Yet, whilst we should not dismiss others’ suffering, we do not need to scurry to the bunker and prepare for Armageddon. Any artist will tell you that.

As Coleman says, “Ten years ago, I may have reacted differently. I turned 50 last year, and one of the great parts about getting older is you realise that it’s all going to be okay. I mean, I’m proud of everything I’ve done and achieved in the last 10 years, but to be honest with you, I could live in a beach box as long as I had food, water, shelter and love.”

Meanwhile, sitting in the foyer at Patrick School of the Arts, Hallsworth smiles when he contemplates 2021. “Yeah, it’s definitely going to be different.”