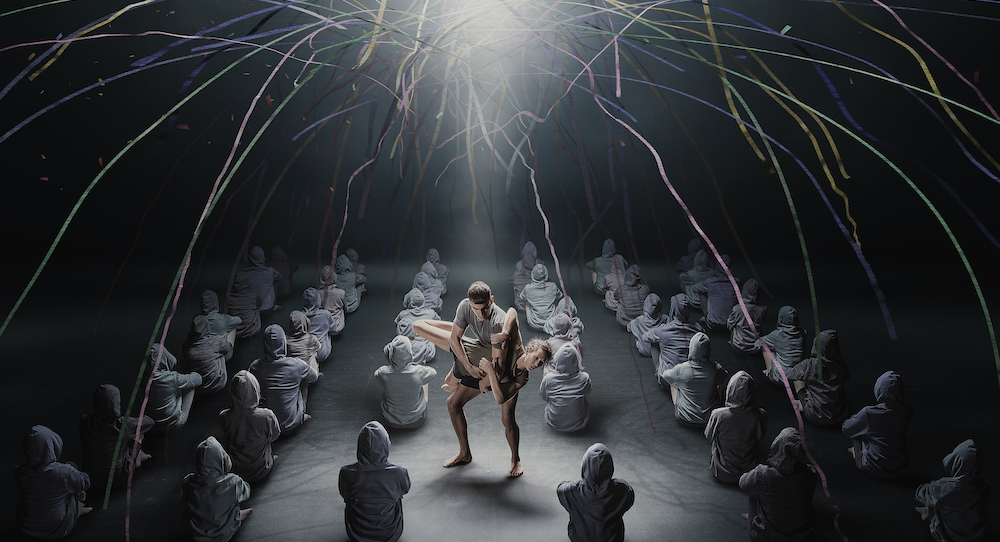 Back in March, Dance Informa spoke with Amy Hollingsworth about the upcoming season of a show called Three. We all know what happened next.

Fast forward to late July, and here we are again; only this time none of us can honestly say what’s next. (Indeed, as I write, border closures are once more being announced, as ‘second wave’ scenarios loom.)

However, despite the now endemic uncertainties of contagion, politics and economy, and the sector-wide disruption stalking the arts, the organisers of the Brisbane Festival are pushing ahead with plans to run the event from September 4. To this end, Hollingsworth and the Australasian Dance Collective (formerly Expressions) are back in serious rehearsal.

“I think we all have a huge sense of gratitude as a group,” she reveals. “We are all still in a studio and we are all still able to work, at least for now. But also, we’re aware that people really need art right now, really need hope. Art can illustrate and imagine how we can move forward and still be connected.”

Having done so much work on the cancelled Three, and having survived lockdown, Hollingsworth and her ensemble find themselves in a similar (yet entirely different) situation with their new work, Arc. Although COVID-safe practise is relatively straightforward, the psychology of the situation clearly requires more attention. “I think this has been the bigger fact,” Hollingsworth says. “It has been a trickier process to make sure that people’s emotional wellbeing is in hand.”

Yet, for all the fraught mindsets and external unknowns, Hollingsworth is unambiguously excited by the looming prospect of BrisFest 2020. “Thrilled barely scratches the surface of it,” she enthuses.

Across town, renowned indigenous dancer/choreographer Thomas E.S. Kelly (whose commissioned work Silence will play at Brisbane Powerhouse) reflects on similar themes. Whilst noting that the physical aspects have been “difficult but doable,” he adds, “The mental side of it, that has really been very difficult. Like, it’s on, it’s not on, it’s on, it’s not on; and now, finally, it’s on. But then, with what’s happening down in Melbourne, is that going to make its way up to Queensland? Even now…what is the plan if the border shuts?”

Although artists, as Hollingsworth argues, are “comfortable with ambiguity,” the world of 2020 is atypically unpredictable, and this makes dancemaking and festival organising an unusually precarious pursuit.

“If the show ends up not happening, or getting postponed, then we’ll deal with that,” Kelly declares. “But right now, we’re living in a theoretical world.”

The task for Kelly, as a choreographer and co-head of Karul Projects, is to keep cast and crew up for the challenge. “As soon as we were allowed to jump back into the space, post-COVID, we were in the space,” he says. “I think because everyone spent so long not being with other people, everyone was just so happy to see each other; and not just like we’re catching up at the pub or something, but actually to jump into a project. It’s was like, ‘Hey guys, we haven’t even been able to do a dance class, so let’s make a really hot show.’”

Meanwhile, one of Queensland’s flagship performing arts companies, Circa, is preparing to mount a large scale work, Leviathan, at QPAC. It is an ambitious, multi-disciplinary event, and according to Artistic Director Yaron Lifschitz, “We’re all very conscious that we’re one outbreak away from being not able to do this; and we have a responsibility.”

Indeed, for Lifschitz, the circumstances of Leviathan’s creation have focused particular attention not only on aspects of process but also on broader socio-cultural implications. As he explains, “The sense that we have a responsibility for our community and our world is actually present in the process of making this show. How we meet, how much space we leave between each other; all of that stuff is crucially important to how we get everyone on stage, and don’t become the cause of something bad.”

Given the unique historical juncture we find ourselves at, it is hardly surprising to find artists musing on the many themes of the moment. Hollingsworth’s Arc speaks of ‘spanning’ and ‘traversing’, Kelly’s work addresses the spiritual and political aspects of silence (and of being silenced), whilst Circa is taking inspiration from the writing of philosopher Thomas Hobbes’ and his classic 1651 work Leviathan.

Even if you have never heard of Hobbes, it is likely you have heard his description of life as ‘nasty, brutish and short’ and perhaps of his description of nature as ‘the war of all against all.’ Whilst some might argue that a 369-year-old book about the social contract has little to say to COVID-world, Lifschitz would differ.

“Are you more free when you’re connected, part of something, or when you are alone?” he asks. “I think the answer is yes, to both, in different ways, and with unresolvable complexity; and it’s that complexity which makes the show. The whole show is constantly negotiating this shifting relationship between the individual and the group, between freedom and oppression, connectivity and release.”

Elsewhere, Silence picks up these threads, directly addressing aspects of the social contract that many believe have failed. As the spectacle of cops choking people to death and mass protests play out on streets and screens around the world, Kelly enters the fray. “What are we trying to say that doesn’t get heard or doesn’t get said?” he ponders. “For me, with regards to indigenous issues, it’s the lack of a treaty. And so, in the end, Silence is about a treaty.”

He pauses a moment, then adds, “Actually, this show isn’t about a treaty; this show is the treaty.”

Meantime, the Australasian Dance Collective is preparing for its large-scale, site-specific showing of Arc; and just as it was in March, so, too, the viral terrain is tricky. That said, Hollingsworth is gritting her teeth and moving forward. “I’m really creating a work that celebrates everything it means to be human, from rigour and grind and frustration through to absolute freedom through dancing our frickin’ hearts out.”

As for the titular arc, she elaborates, “It is about that arc from me to you, that connection; but also, from where we’ve been to where we’re going.”

In the short-term, fingers crossed, we will be going to the Brisbane Festival. At the time of writing, none of us can say much more than that.

The Brisbane Festival will be held 4 – 26 September. For more information, visit www.brisbanefestival.com.au.