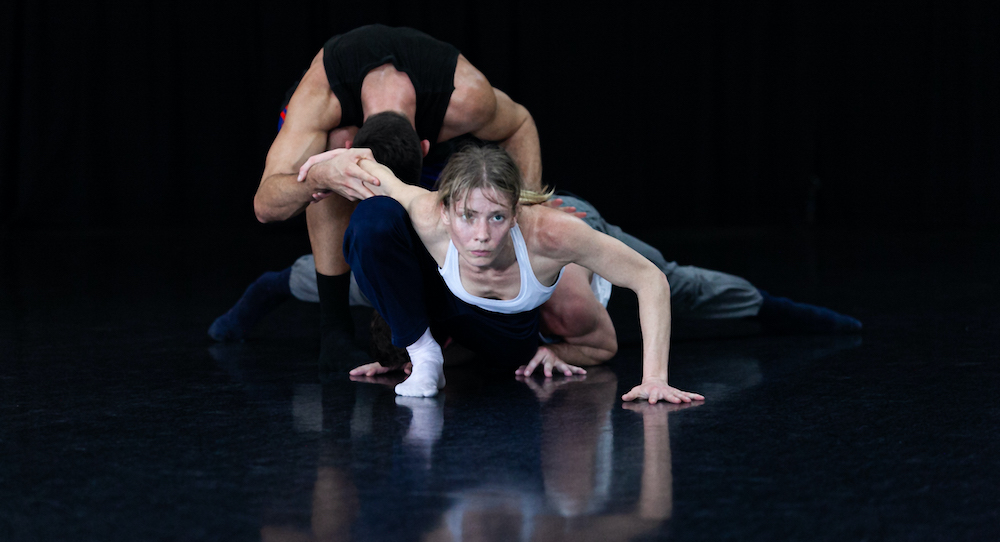 She emerges from the rehearsal studio, where she is working with her company dancers on a re-stage of a short piece she first appeared in over a decade ago. Her name is Amy Hollingsworth, and she is the AD of the Brisbane-based Australasian Dance Collective. In early April, the piece she is working on will appear alongside two new works in a triple bill called, simply, THREE.

“I’ve always been fascinated by how different audiences connect to different works,” she muses. “This can be seen as either a strength or a weakness of the choreographic director model. If you have a strong, distinct style and people love it, then that’s great, but if someone comes along and they don’t enjoy it, they’re not going to come back. Whereas, with things like THREE, it’s like Neapolitan ice cream. You’ve got your three flavours, and so chances are if the audience don’t connect to one, they’ll connect to one of the others.”

Far from being merely risk averse, Hollingsworth and the company she fronts are consciously following the curatorial (or repertory) model. Indeed, having recently undergone a re-brand, from Expressions Dance Company to the current moniker, they are looking to be a hub for conversations and collaborations in dance. Hence, THREE, which will feature works from local boy Jack Lister, the 2018 Keir winner Melanie Lane and global choreographic superstar Hofesh Shechter.

“The curation of THREE has a through line: excellence,” states Hollingsworth. “I guess I was looking for three creatives who all had a really…I know ‘unique’ is a word that’s used a lot these days, but each of these choreographers really do have a unique signature and choreographic voice.”

If Lister is more balletic and Lane more edgy, Shechter is grandly theatrical and propulsive. As Hollingsworth says, “The story I’ll be telling as a curator is, I guess, what attracts me to certain artists and what insights have shaped my career. It’ll be that beautiful, holistic painting of what makes up my taste as an artist.”

Of Lister and Still Life, which draws inspiration from the 16/17th century Memento Mori movement, she adds, “From the moment I saw his work, I knew I was seeing the emergence of a very powerful creative, who, as he grows, adds layers of complexity and maturity to each piece. So, I really wanted to give him this opportunity.”

Lane has also made a big impression. “She’s very hard to replicate,” Hollingsworth notes. “Every time I watch her, I get a really strong sense of who she is and how she moves. She’s got this extraordinary combination of kind of sexy and cool mixed with, and I know this seems contradictory, but a violence and a romance in her work. It’s full of sensuality but a real power.”

However, Hollingsworth’s connection to Israeli-born, UK-based dynamo Shechter is more personal. Having first encountered him in 2004, when he presented Cult as part of the Place Prize fortnight, she went on to work with him on his breakout piece, In Your Rooms. “One of the things I wanted to gift to Brisbane audiences but also to the dancers of this company was the gift of Hofesh,” she declares. “I think most artists are the sum total of all of the people they’ve been fortunate enough to collaborate with, and I feel like that myself. I know that the first moment I saw his work in London, I was rivetted, determined to work with this man, to feel and embody his style. Knowing the impact it had on me, it was my first inclination when I received this job, to bring that here.”

The work she is re-staging is none other than Cult, a piece she herself danced in as part of a European tour with Shechter’s company. Although the 2004 Place Prize may ultimately have been won by Sydney Dance Company’s Rafael Bonachela, for Hollingsworth, Shechter’s 15-minute work is as magnetic as ever.

“It was the start of my journey with Hofesh and the start of his journey into this global stratosphere of choreographers,” Hollingsworth shares. “It was made for six dancers, and so I feel like the story is completing itself because this company has six dancers.”

For the performers at the Australasian Dance Collective, THREE is both a challenge and an opportunity to embrace diverse choreographic voices. As a lifelong dancer herself, Hollingsworth knows what this entails. “A lot of companies that are not choreographic director lead are repertory companies, and so it is relatively common practise for dancers to work like this. The biggest challenge is to give the dancers enough time to fully sit in each of the styles, so they feel like they have a connection to it before we bounce into the next thing. So, we structured the rehearsals accordingly.”

Meanwhile, for those in the auditorium at QPAC, it will not only be their first hometown glimpse of Shechter but also a chance to range across a variety of styles and conceptual frameworks. As Hollingsworth concludes, “It’s, like, contemporary dance. I know those two words together can make people nervous, but what I love is that it’s just dance. It’s just whatever’s happening now.”