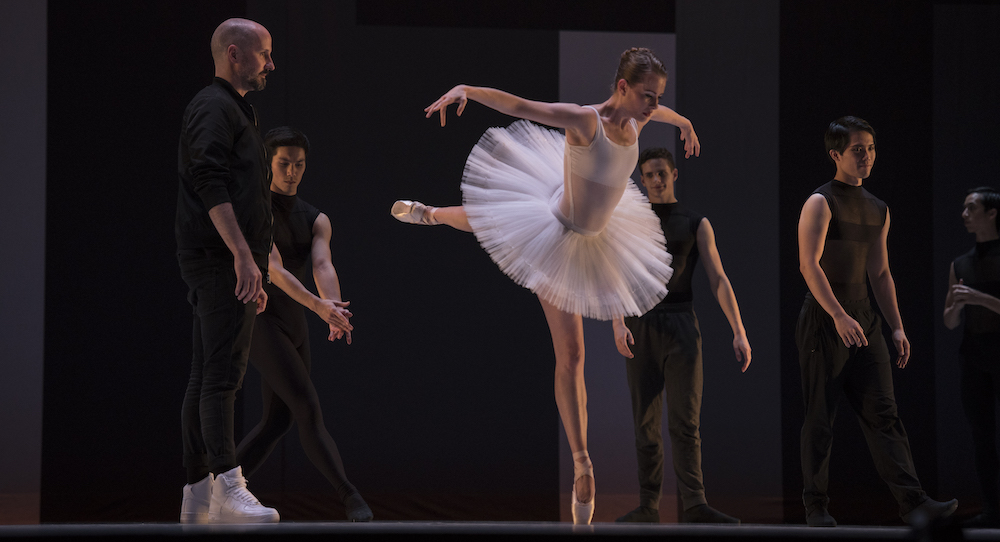 It’s been six years since Robert Curran took the reins of the Louisville Ballet in Kentucky. Curran sounds as enthusiastic as ever with plenty of creative ideas bubbling as he seeks to combine Louisville Ballet’s traditional rigour with the emerging dynamic regional artistic scene.

Dance Informa ​caught up with Curran during the COVID-19 lockdown that has seen the company go into hibernation as dancers and creatives try to maintain their skills and creativity in social isolation. He reflects on the gains he has made with a distinguished regional company and what the future holds for these thriving regional arts organisations.

So, how did a boy who grew up in regional NSW find himself a coveted role as Artistic Director of the Louisville Ballet?

“I retired from The Australian Ballet on November 26, 2011, and did some travelling before spending a wonderful year with Bangarra Dance Theatre as rehearsal director, and then spent another six months travelling throughout Europe.

I had finished my Business Degree from Monash University and a Diploma of Elite Dance instruction at The Australian Ballet, and I was looking for a role in the industry after my performing career. On my travels in Europe, I found out that Louisville Ballet in Kentucky was looking for an artistic director. I asked everyone I knew what they thought of Louisville Ballet, and they all said ‘go for it’, so I applied. It’s the seventh oldest ballet company in the U.S., so it’s a renowned and celebrated company, which explains why there were 80 candidates for the position and four making the last round of interviews, with the opportunity to meet with the dancers and take them through a class.”

Having only retired two years previously and without experience as an artistic or company director, how did you find the selection process?

“It was a great process actually; they really impressed me with the rigour they put us through. We got to meet everyone — ballet staff, general staff and dancers. I also met the board members, people in the community and several donors. It was a great process to go through. It was thorough and very intimidating actually but with a typical welcoming Kentucky experience.

My first interview went really well, and as I left the building on the same day, I was told they would invite me back for a second interview. The second interview was to present my plan and vision for the company. I had prepared a PowerPoint presentation timed to the second, but I arrived to find that the PowerPoint projector was broken, so I had to pirouette in 30 minutes to a paper presentation. In retrospect, I think the most critical part of the process for me was that I thought I had 100 percent failed. I said to my parents, ‘Guys, you will have to let it go; it’s not going to happen.’ My father was the only one who said, ‘Just wait.’ And he was right!

It turned out that they were okay with my vision. I think it was me having to pivot really quickly and stick to my position and really believe in what I was trying to achieve here, and it seems that they felt it. One board member said it was about embodying ‘the show must go on’ ethos that the Louisville Ballet was looking for.”

Known more for producing Muhammad Ali and the trail of Bourbon distillers, how would you describe Louisville, and what is it like working in a place removed from the dance meccas of New York, San Francisco or Paris?

“It’s a great city to live in, in terms of its breadth of experience and opinion and affiliation — a really diverse city. It has its struggles like a lot of American cities; there is a social and economic divide in some senses. There are a lot of economic issues that similar regional cities face. For example, corporations founded here in Louisville have been absorbed into global multinationals, so it’s an ever-changing economic landscape. As the country’s most ‘northern southern city’, it has a diversity of cultures but also maintains its traditions of Southern hospitality, which is wonderful to be a part of.

While Louisville may not have the size, historical prestige or the resources of much bigger cities such as New York, LA or Washington, D.C., it interweaves its main cultural institutions into a tight supportive ecosystem. It’s one of the few cities here that has major institutions, including the ​Louisville Ballet​, ​the Kentucky Opera​, the ​Actors Theatre​ of Louisville and The ​Louisville Orchestra.​ We’ve worked with The Louisville Orchestra and the art museum and art and design colleges, so it’s a thriving artistic scene, not a rural backwater.”

After six years, have you realised your artistic vision that you outlined for the company?

“Artistically, absolutely! The vision is a brave vision for a regional company in the U.S. with a modest budget. I really stuck my neck out and, by extension, I stuck the company’s neck out. It has a lot to do with recent work, and current voices, diversity and collaboration. I think the community has embraced it from an artistic perspective, and I feel very, very proud.

I stand by every production we have staged, with the quality and willingness of the dancers to be really brave and trust me, and to expose themselves and be vulnerable has been a joy to watch, but it’s very, very challenging in this environment. From an artistic perspective, I’m thrilled and excited about the opportunities for today’s generation of dancers and tomorrow’s generation. On the business side, we have a lot of work to do in terms of building audiences and building the live performing arts scene in this digital world.

On a broader perspective, one of the collaborations I’m most proud of is with the local visual arts scene. There is a vibrant visual arts scene here harking back to the days of Diaghilev and the Ballets Russes and what he did with visual artists and choreographers. It’s been good to delve into the incredible depth of the Louisville art scene. It’s very exciting to push individuals and organisations, and find new territory through collaboration. The community is invested in seeking out new works through collaboration. Getting people with different experiences, different tool boxes and putting them all in one room together to hash out new ideas is just beyond thrilling, and the final product is always relevant and exciting and energising!”

What have been the most striking differences between working with the Louisville Ballet and The Australian Ballet?

The Nutcracker is a huge phenomenon in the U.S., a major winter tradition and very different to our hot Australian experience. You have to do The Nutcracker every year, and there will be more shows of Nutcracker to herald the Christmas season than any other production. And that funds the majority of the rest of our productions during the year. That said, the Nutcracker phenomenon is shrinking, so we have to think about what else are we going to offer?”

How do you think the Louisville audiences would respond to Graeme Murphy’s Australian summer flavoured Nutcracker?

“Local audiences respond well to innovative and international works. There is a great appreciation for the arts here. We recently presented Ronnie Hines here, which was hugely successful. We had a great response to it; they really do appreciate brave works of art, whether existing or brand new works and everything in between. I think a lot of Graeme Murphy’s work as an iconic Australian choreographer would go over really well here. Maybe not the iconic sweaty Australian summer Christmas but his willingness to incorporate contemporary and vernacular elements into a traditional ballet.”

What has been the everyday impact of the COVID-19 lockdown on the Louisville Ballet?

“With the coronavirus, I’m more accessible than I’ve ever been, which is not necessarily a good thing. I have no excuse now of travelling time between meetings. I can’t just say, ‘Sorry, guys, I have to run to another meeting.’ And even though they’re off contract (the dancers’ contracts ended at the beginning of April), I’m relishing the daily contact I have with the dancers.
In terms of daily routine, we have a class each morning from 9am to noon, five days a week for the dancers. They can join the class or not. There might be between 30 and 40 dancers every day for conditioning and class, for strength and planetary training for our main company and the Studio Company. That’s a three-hour commitment from me.

We have been given this opportunity to explore new ways of presenting dance. Technology is constantly going to be evolving, and we need to evolve with it and while we can’t be in the theatre together and for the foreseeable future…January, February, maybe March, April? Who knows how we will rise to the challenge of keeping our creativity and innovation alive in a digital world?

There are beautiful live stage recordings of ballets out there, and there are also incredible dance art films out there that do not attempt to create a live stage experience, relishing in the challenge of being centrally cinematic. Given this broad spectrum of digital innovation, we need to ask ourselves, ‘What do we need to absorb this art oxygen so we can survive and flourish artistically in this evolving world?’

Not everyone is as blessed as we are, and there are many people out there who rely on us to keep creating and performing to give them a reason to be. As a performing company, social isolation is a struggle, so we try to make up for that isolation. We will be back in the theatre and we have ambitious plans to one day have the Louisville Ballet perform in the State Theatre in Melbourne and the Joan Sutherland Theatre in the Sydney Opera House.”

Financially, how is the company surviving lockdown? Is there any government assistance for dancers, or a minimum wage or other assistance given to the company?

“Louisville Ballet has received generous support and assistance via foundations and individual benefactors, both here in Louisville and outside our community. We were also fortunate to receive government assistance that is helping to sustain us through this pandemic. Our dancers work on a 30-week contract-basis, and those contracts did end in mid-April, and we are hopeful for a return for the dancers in early September.

There is no doubt that this crisis is having, and will continue to have, a significant financial impact on Louisville Ballet. Ticket revenue won’t come close to what we earn in a typical season. However, our hope and positive expectation is that our generous supporters will continue to engage and connect with us on the digital stage. And new investors and supporters will see the value of what we bring to our local community, and beyond, as well as to the future of our art form. I’m cautiously optimistic.”

Do you already know what your first production will be once you’re back in the theatre?

“Oh yeah, it’s going to be big! Sorry, but I can’t divulge the details. Next fall will be our 70th anniversary, so yes, we’re beavering away with that season right now. I have repertoire planned right down to the 75th anniversary. It will be so good!”