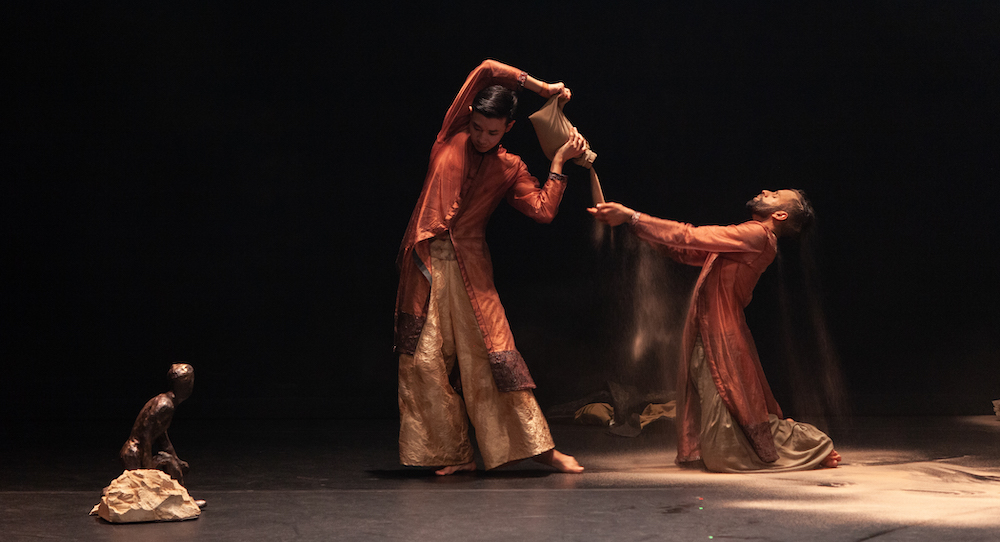 Back in September, when Dance Informa first spoke to Hu Shenyuan about Saṃsāra, he said (of the Sanskrit word) that one possible Mandarin translation was “something like the roadless road.” Six months later, and the mesmeric beauty of his two-hander with British Indian dancer Aakash Odedra has allowed us to glimpse, if only for an hour, this beguiling mystery.

Tackling the esoteric notion of saṃsāra, whilst simultaneously re-imagining the 16th century Chinese classic Journey to the West, was always going to be risky. However, the result is extraordinary. Technical, rigorous, virtuosic and transporting, Saṃsāra is at once hugely theatrical and deeply private. The brushstrokes are broad, epic sweeps and grand visions, yet remain focused on a central stillness. The cosmic wheel spins, dervish-like, while the hub remains. Like the mystical, paradoxical silence at the heart of all sound.

That said, Saṃsāra is no exercise in Zen austerity. The stage is a vibrant, moving fresco, the dance is athletic, full of yang energy and vigorous intent. Likewise, the live accompaniment is bold, emotive and cinematic. Percussionist Beibei Wang and vocalist Michael Ormiston punctuate and accentuate the choreographic narrative, reminding us that even pristine spiritual practice is wrought in flesh and blood. In desire.

Meanwhile, back on the roadless road, Dr Yaron Abulafia’s lighting design is itself a form of dance. More than simple fx or colourful atmos, it is exactly what a theatrical device should be, adding without being intrusive, building without crowding out. ‘Pure genius’ would not be overstating it.

Indeed, Saṃsāra’s union of esoterica, elite performance, superb stage craft and simple, folkish storytelling is a rarity. Hu and Odedra deliver the kind of masterful display that both occasional observers and full-time dance nerds can love. At times, it is enough simply to admire their physique; at others, you are aware of the deep trust, bordering on surrender, that informs their riverine, graceful movement. If beauty is indeed the form of the good, boy, it’s good.

Yet, of course, it is beneath and within the folds of spectacle that the gem resides. It is there, still and quiet and eternal, but only if we want it. Ultimately, this is what holds Saṃsāra together. We do not have to notice it to revel in the show, but if we do, the show is revealed. And what a marvel it is to behold.