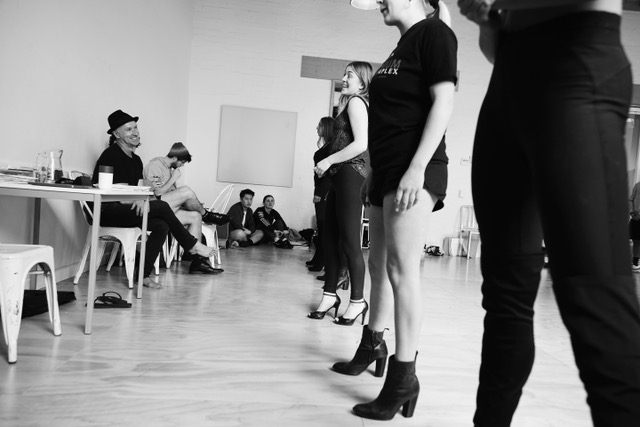 Victorian Dance Festival (VDF) 2020 is fast approaching, and a huge number of incredible instructors have been announced as part of this year’s faculty. One such instructor is Andrew Hallsworth. A musical mastermind, he won the 2018 Helpmann Award for ‘Best Choreography in a Musical’ for the World Premiere of Muriel’s Wedding the Musical, the 2015 Helpmann Award for Opera Australia’s Anything Goes and the 2014 Helpmann Award for the Hayes Theatre Company’s inaugural production of Sweet Charity. He also won Sydney Theatre Critics Awards for Muriel’s Wedding and Little Shop of Horrors.

Aside from his storied career in theatre itself, Hallsworth is the acclaimed Director of Musical Theatre at Patrick Studios Australia. His fulltime two-year diploma course has been running for 10 years alongside Todd Patrick’s Performing Arts course with great success. We spoke to Hallsworth about bringing this incredible education experience to VDF 2020, and what students can expect to learn from him – along with some golden nuggets of industry advice.

“I’m really excited to be doing VDF,” he begins, “because I don’t usually get the chance to do anything like this because I’m so busy working on musicals. My motivation is that musicals are about storytelling, and that’s what I’ll be bringing to the festival. I don’t want everyone standing on their own doing some choreography that I work out; I want to make it interactive. I’ll probably put something together that involves three to five people, so the dancers will start building it like an excerpt out of a musical, which I think will be very exciting. They will be able to interact with other people and act off other people as well, which I think is such an important thing to teach.”

Hallsworth is, unsurprisingly, very passionate about the importance of musical theatre as an art form. “I think today, young adults are not talking as much as they used to or interacting as much as they used to,” he explains, “and there’s also a sense of worry about interacting because they don’t know what they’re going to receive on the other end of that. What’s so great about musicals is that everyone is on the same page, on the same road forward, telling the same story. It’s such a great way to get to know one another. So, let’s try and walk away with half a dozen new friends whom you’ve never met before. I love that about musicals; it brings the whole audience together and everyone leaves in the same spirit of the show, so I’d like to create that feeling at VDF.”

Although Hallsworth spends much of his time working with pre-professionals at Patrick Studios, and industry professionals in the shows he works on, he is excited to share his knowledge with the wide range of ages that attend VDF. “I think it’s just down to communication,” he notes. “I’ll speak a language that they understand from a dance perspective, and I’ll have to do my homework to make sure that I’m getting across what I want them to do. But I’m thinking about doing something that is age-broad – so this little piece might have younger children in it, and have younger adults in it, so they understand each storyline. And, I want them to have fun. Through musical theatre, you can be cheeky, silly, you can let your hair down and go crazy.”

Those at the older end of the spectrum, perhaps choosing their full time course or halfway through it, will benefit hugely from Hallsworth’s expertise and industry connections. And, his advice for dancers at this stage of their career is simply to choose the right training. “They need to seriously think about where they are going to spend the next two to three years to develop their skill,” he says. “Australia is really developing strong triple threats here. So I think you also have to think about the demands on the musical theatre industry. I’s a very different world to doing commercial dance, and you have to be dedicated. Your whole day has to be scheduled toward those one or two performances a day. Training is the most important thing, and even if a dancer has done my two-year course, at the end of that, if they don’t feel they’re ready, then I say do more, you can never do enough training.”

The great thing about VDF, of course, is that dancers who are finding their way and making decisions about the future can work with industry icons like Hallsworth and get a taste of the training and career opportunities that are on offer. Hallsworth, like all the VDF instructors, is looking forward to providing that. “I’m just excited to get in front of a group of the next generation of performers who are heading our way,” he says. “I’ve been working for 30 years. I started doing shows when I was 17, so I think it’s going to be quite a unique experience to get advice and information and inspiration from somebody like me. I’ve had the chance to travel the world over and over, and work with companies from Sweden to Brazil and Broadway to the West End. So I’m excited about that. I think my role as I get older is really to give back to everybody what I’ve managed to receive.”

2020 remains a busy year for Hallsworth, who aside from his full-time course is working on some new projects. “I’ll be starting Merrily We Roll Along; I’m doing the Sondheim musical for the Hayes in Sydney,” he notes, “and then I come back to do Fun Home for Melbourne Theatre Company and Sydney Theatre Company, rehearsing in Melbourne. And, of course, there’s VDF. I’m just excited to get there and have a good time! So it’s a busy year for me, switching between multiple cities and keeping an eye on my course while I’m away. That’s my life, I get used to having many hats on – which is a pun, given that I’m wearing a hat all the time.”

Indeed, Hallsworth and his iconic hats will be impossible to miss at VDF this year. For more information on the festival and its instructors, click here.

Andrew Hallsworth’s theatre credits include Assassins, Dream Lover, Sydney Opera House – The Opera, Two Weddings One Bride, Ladies in Black, Rupert, Dream Song, Shane Warne the Musical (concert), A Funny Thing Happened on the Way to the Forum, the World Premiere musical An Officer and A Gentleman, the original Australian production of Eurobeat – Almost Eurovision, Leader of the Pack – The Ellie Greenwich Musical, Sideshow Alley. For Melbourne Theatre Company, he choreographed Kiss of the Spider Woman, Twelfth Night, Rupert, Private Lives, Vivid White, Egg, Hamlet, Next to Normal and The Drowsy Chaperone. For The Production Company, he has co-directed and choreographed The Producers and Anything Goes. Choreographed Jerry’s Girls, La Cage Aux Folles, The Pirates of Penzance, Gypsy, The Boy from Oz, Carousel, Mame, The Boy Friend. He co-choreographed The Music Man and Bye Bye Birdie. He won the 2018 Helpmann Award for ‘Best Choreography in a Musical’ for the World Premiere of Muriel’s Wedding the Musical, the 2015 Helpmann Award for Opera Australia’s Anything Goes and the 2014 Helpmann Award for the Hayes Theatre’s inaugural production of Sweet Charity. He has also won Sydney Theatre Critics Awards for Muriel’s Wedding and Little Shop of Horrors. Mr. Hallsworth co-choreographed the international production of Priscilla Queen of the Desert for Broadway and its other worldwide seasons including the recent 10th anniversary Australian celebration tour. Mr. Hallsworth is also the Director of Musical Theatre at Patrick Studios Australia.