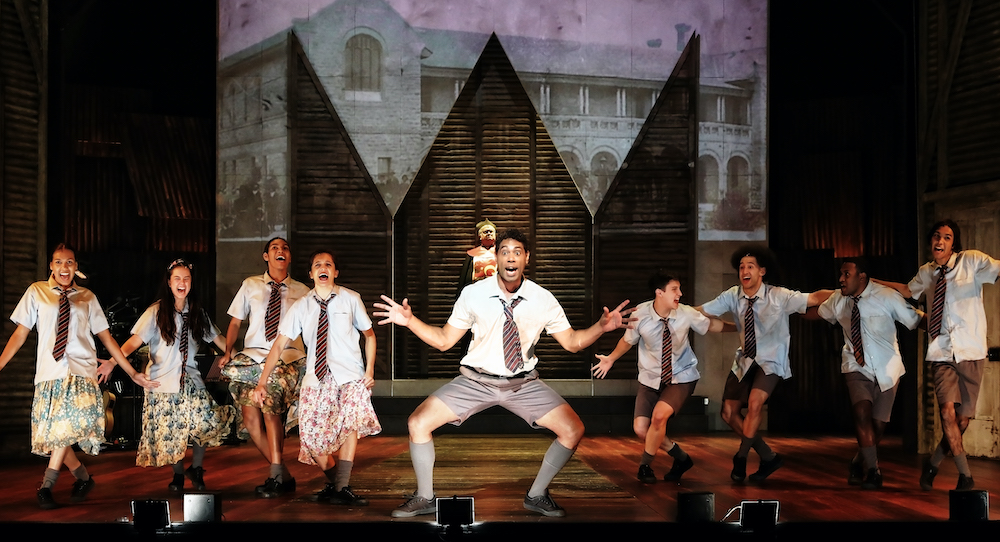 Thirty years after its original stage debut, Jimmy Chi’s Bran Nue Dae has hit the Riverside Theatres in a revival season for Sydney Festival 2020. Bran Nue Dae is a musical play written by Chi and his band, The Kuckles, about his experiences of growing up an Australian Aborigine in Broome, Western Australia in the 1970s, highlighting the cultural temperament of the era.  Bran Nue Dae was ground-breaking on many levels, being the first musical written by a First Nations person, addressing the politics, views and struggles in ways they had not been done before on the Australian stage.

Bran Nue Dae brings up so many feelings — poignant and heart-wrenching to joyous and celebratory.  The story follows Willy (Marcus Corowa), who is expelled from boarding school in Perth, and his journey to return home to Brome. Along the way, he meets Uncle Tadpole (Ernie Dingo) and a variety of other characters, some who end up being his relatives. The story looks at the effects of displacement of the First Nations people, and cultural attitudes at the time, with mention to the history of events that lead up to the way things are, and how they affect people now.

Much of the dialogue in this version of the production is left out, and therefore the fullness of the story and many nuances are lost or hard to follow.  Nonetheless, the songs that drive the show do pull the audience along with the characters through to the end.

Fresh talent defines this show, with only a few cast members veterans of the industry. Corowa as Willy is wonderful. With a beautiful voice and charismatic presence, he owns his performance, and is very easy to watch. Co-lead Teresa Moore (Rosie) is a talented singer with a beautiful voice; however, she does not have the strength of presence of some of the more experienced characters. Andrew Moran (Father Benedictus) brings a wonderful presence and depth of experience as a professional opera singer with copious experience to the production. It was wonderful to see Dingo reprise his role as Uncle Tadpole from the movie version, and he was brilliant and engaging. The ensemble are a lot of fun to engage with, their enthusiasm shining through; however, with so many inexperienced cast members, there is a certain polish lacking. Having said that, despite the lack of polish, this is a production that feels very organic, very heartfelt and very natural. The lack of polish does not feel out of place with culture and story at the centre.

Choreographically, the movement and rhythm of the songs with their accompanying movement pull from many influences, including the old Hollywood golden year musicals, with boys versus girls partner dancing in very simple formations, vibes of Elvis Presley movies on the islands (including the Hawaiian shirt Willy wears for most of the show), and dancing that doesn’t come across as being purely Australian in origin but instead seems to pull from the Pacific Islands, as well as contemporary dance. There does seem to be a great mish-mash of artistic influences in Bran Nue Dae, from the 1970s and prior, from all variety of classic musicals, American country and western, to Elvis. The choreography is simple, using traditional style movements and simple blocking. There is an organic element to the group pieces, where there is a lack of tightness to the work, but this works well in context of culture being the focus. Bran Nue Dae is not so much a musical where dance might feature, but dance in this work is there to lend to the telling of story, giving a context and additional layers, which it does in a very natural and unassuming manner.

Bran Nue Dae leaves you singing and dancing and celebrating, but also pondering and thoughtful. It gives one pause, reminding us of the things that were, and determined to continue in the spirit of reconciliation. This is a very important musical, one that broke much ground in Australian theatre history, paving the way for future theatre that teaches us about our past, whilst looking hopeful toward the future.