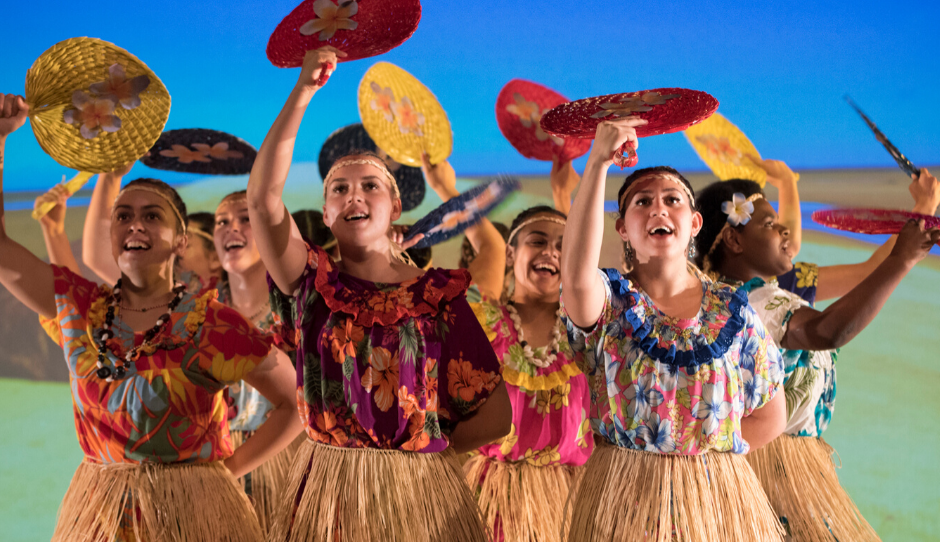 There was a warm, joyous atmosphere when we entered and a great sense of connection to land and country in NAISDA Dance College’s 2019 season, Ngoenakap. Traditional dances, mostly choreographed by Dujon Niue and Sani Townson, were interspersed with and balanced by contemporary ones. Live music accompanied the traditional dances, provided by Niue, Harry Newie and Norah Bagiri, as well as the dancers’ recorded music for the contemporary works.

The performers were already on stage as we entered, quietly humming. There was a beach scene on the projection screen behind them with waves and a boat that perhaps edged closer to the shore.

Ngoenakap means “heart” in the Torres Strait Islander Kala Lagaw Ya language of its director, Sani Townson, seeking to bring his cultural heritage to the stage via the dance and music of NAISDA Dance College students and 2019 diploma graduates. Technically, the lighting, projections and costumes were chosen and interwoven to give each work the correct ambience. (The black contemporary costumes were very Sydney Dance Company.)

The evening began with a Welcome to Country – in this instance given by Uncle Allen Madden.

In the first half, the contemporary pieces were choreographed by a range of choreographers, from director Townson, to Niue, Deon Hastie, Pamela Williams, graduating student Kiarn Doyle and included contributions from the cast members themselves.

With regards to the traditional dances  – Custom, with its projection of unrolling material that becomes the women’s fans that at one point covers the stage, had very strong patterns and lines of undulating , swirling choreography. There are also sculptural groups, and to conclude, they slip or slither mysteriously away.

Low Tide in the Mangroves, with its rockpool projections, featured Cunningham-like choreography and some very difficult lifts and partnering.

Then the women returned with their traditional Fan Dance celebrating land and culture, with its sandy desert projection and live music .it was teasing and  flirtatious.

Shoreline, a contemporary trio with a harsh jagged soundtrack, was full of flying leaps, long fluid arms and rolling floorwork and demanded a very flexible back

Sik Dance (Wave) for the men, had the audience cheering and screaming. The men, in purple underskirt and raffia overskirt, held special halves of shields with feathers that at some points closed to show the full circle design. It was full of strong beats, stamps and small jumps.

The Beach, “a celebration of the gifts of the ocean” for the entire ensemble, included fabulous projections of turtles, with which the dancers on stage interact. Also included were fierce pirouettes and a sort of combination of b-boy/MTV choreography.

Bass Drum (Warup Dance) was a traditional dance and song for the women.

The slinky, powerful Just You Lot brought the first half to a close – a contemporary work with unusual lifts and death defying leaps. It showcased the graduate performers: Kiara Wilson, Maddison Paluch, Brianna Kemmerling, David Biondi-Odo, Kiarn Doyle, Jarryd Dixon, Edan Porter and Chandler Connell, each having an exciting  solo before reforming as an ensemble. Hosken Macfarlane was featured in another work.

The second half opened with Murriyan, with the dancers in semi-transparent black costumes on stage as we re-entered, warming up. Rolling slithery floorwork, headstands, sculptural groups that formed and then split apart, undulating arms and a repeated use of pulsating opening and closing hands were included.

Garkaziu with its projection of a city nightscape followed for the men, who were topless but wore black leggings and had long red sashes that at times were used as acrobatic aids, twisting and supporting. Fluid rolls and leaps were also required.

Unicorn for the whole ensemble was bright, brash, colourful and sexy, dedicated to Vaughn (who we see a snippet of interview with on screen) and the energy he brought to community residencies and preservation of culture.

Farewell brought everyone on stage, back to the beach projection, four women leading the singing.

Ngoenakap was a most exciting programme, full of stylish polish combined with athleticism, and of the graduating students, Jarryd Dixon, David Biondo-Odo, Edan Porter and Kiara Wilson showed special promise.