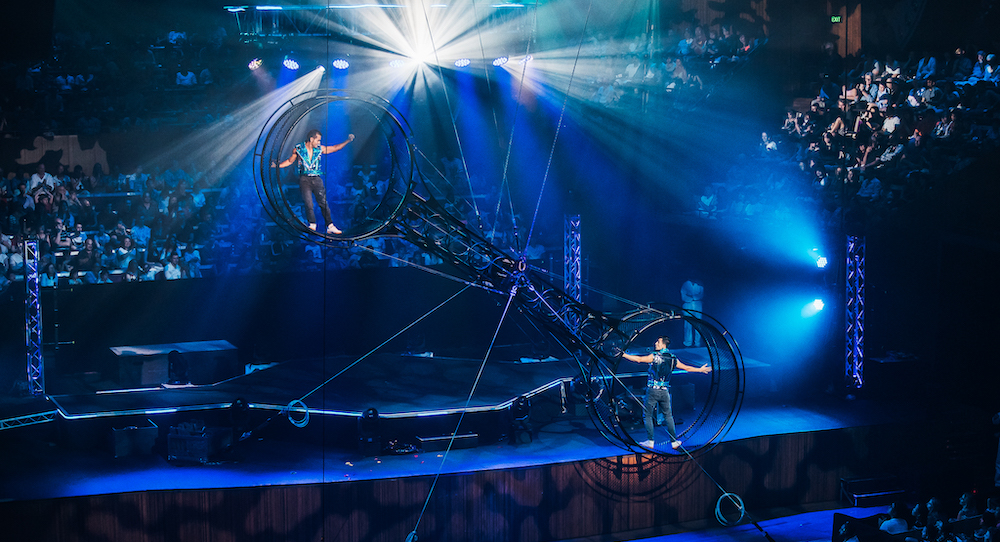 There has been a lot of hype around The Works Entertainment Group’s latest production, Cirque Stratosphere​. Much of the anticipation is to see if the company that created such blockbusters as ​The Illusionists 1 and 2.0, Le Noir and Cirque Paris​ can maintain its Midas touch with a spectacular narrative driven circus show.

It will also be the final show in the Opera House Concert Hall before it undergoes a major development and upgrade over the next two years. Ironically, the Opera House itself, a child of the 1960s futurism, will in turn undergo a number of changes to bring it into the 21st century. So what better show to mark the end of an era than ​Cirque Stratosphere​ with its celebration of our original space age?

Cirque Stratosphere ​is a two-hour performance with a 20-minute intermission enthralling both parents and the numerous young children in the audience. It’s​ ​an ingenious mix of contemporary circus, show dance, music and a piece of narrative historical theatre marking Neil Armstrong’s famous quote, “One small step for man, one giant leap for mankind.” It has been 50 years since Armstrong landed on the moon, but for some of us, it rests embedded in our memory as an iconic moment.

Based loosely on a narrative around the ​Apollo 11​ moon landing, our first glimpse of this space age theme is the DJ high up behind the stage, manning the desks dressed like an old world Astronaut – white motorbike helmet, and white overalls.

There are numerous touches to remind us of the era and the event — for example, Mrs Armstrong sits at home watching the events unfold on a 1960s TV, which actually looks like a microwave. Arielle, aka Mrs Armstrong, also performs a lyrical high wire dance, with an emotional message to her husband 200,000 plus miles away. This touch demonstrates how this emerging genre of new circus/physical theatre seeks to engage a wider emotional palette rather than just purely shocking us with awe and disbelief at the impossible physical feats.

We see thrills and also spills in this premiere performance, which in no way detracts from the performance; rather, it makes the performance even more exciting, recognising that the whole show is being performed without safety nets or wires. The roller skating dancers were graceful, unveiling their skills on a rather small, round stage. The audience held their collective breath as their confidence and panache deserted them as they landed in an ungraceful bundle on the main stage. But we can’t help but applaud them all the more for their daring within a confined space.

There are the typical circus tricks with plenty of high-powered flips and literally jumping through hoops, although these hoops were stacked four meters high, with two daredevil acrobats running at pace before throwing themselves through these hoops. The last run up starts in the wings so as to have sufficient momentum for the daredevil to fly, then dive through the highest hoop finishing in a perfect roll with a fist punched to the sky in jubilation at his exploit.

The music is dynamic and rousing – a mix composed by Evan Jolly. While it won’t be ​Star Wars​ or ​2001 A Space Odyssey, ​it is epic and speaks to the overarching narrative.

The performance includes interaction with various audience members randomly chosen by the show’s comedic heart – ​Tape Face​ – who is one of the most popular performers with the younger crowd. His comic timing and ability to encourage random audience members to come on stage and participate in his wild and wry performance is part-mime, part-clown and all round popular guy.

The show’s highlights, ​”Aerial Sphere” and the ​”Columbian Wheel of Death​”, had us holding our breath as the two acrobats start inside the turning wheel before moving to the outside of the wheel, with no wires attached, defying death with their leaping and jumping to maintain the momentum of the two spheres. It is a key reflection of how we are used to holding our collective breaths to the countdown of the original space voyages. It reminds us that in an analogue world, great things were achieved via a combination of technology and human ingenuity.

These extraordinary feats effortlessly blend agility, coordination and showmanship to create an out-of-this-world spectacle. But the real impact of ​Cirque Stratosphere​ lies in its ability to remind us of our forgotten analog world with its incredible achievements. In a world of avatars, Artificial Intelligence (AI) and the robotics of everything, we still marvel and relate to other people moving through and conquering space.

Cirque Stratosphere​ is an astute celebration of the mix of both the small and the giant steps that ignites our anticipation of the future.