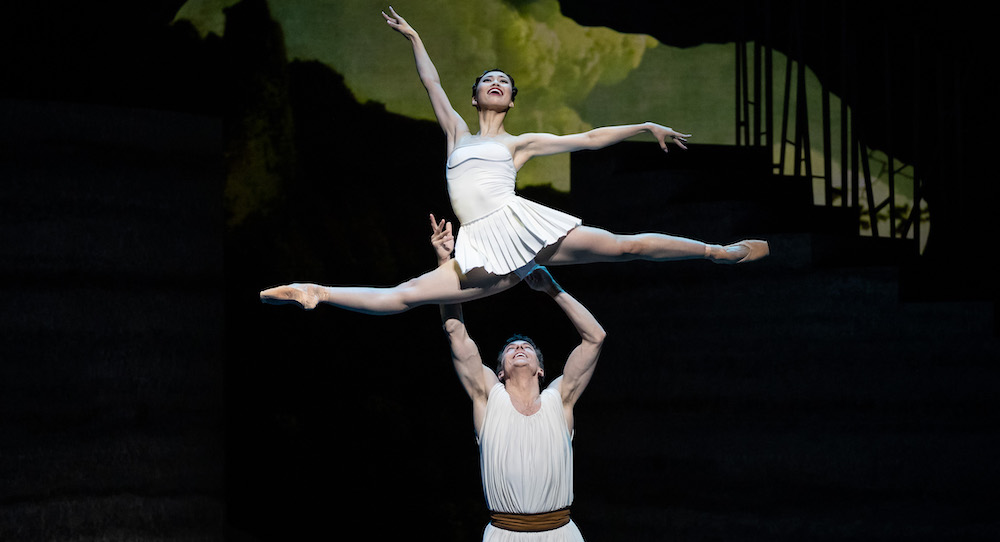 The production of Sylvia is one work where it really pays to read the synopsis beforehand and to make yourself familiar with the narrative and characters. Even so, sometimes you are still going, “Who’s that?”

Balletomanes might be familiar with Sir Frederick Ashton’s 1952 version. This one, however, is a co-production by Houston Ballet and The Australian Ballet choreographed by Stanton Welch (who used to be with The Australian Ballet and is now artistic director of Houston Ballet). Welch has niftily entwined Sylvia’s story with that of two other formidable female characters, Artemis and Psyche. The work is colour-coded, with Sylvia in grey/silver or white, Artemis in blue and Psyche in pink.

This work is inhabited by nymphs, gods and demi-gods and impish fauns. The action moves between the world of the gods on Olympus and mortals. But it is also a celebration of female power – particularly that of Artemis and her Amazonian army in tunics of steel grey armour (hints of Ride of the Valkryies, especially with the stirring horn music). We see how the goddess Artemis loves Orion but is tricked into killing him by her jealous brother, Apollo. Eros is despatched to kill the lovely mortal Psyche but instead falls in love with and marries her, but there is a catch. Sylvia leaves Artemis’ army, having fallen instantly in love with The Shepherd, having been bewitched by Eros. Will it end happily? Will the three pairs of lovers be united?

The huge set, with its arcs arranged like an illustration of vanishing perspective, in some ways as if tearing back layers to reveal the centre of the Earth, also includes some wonderful projection effects such as showers of arrows, a sunburst, stars and comets, as well as flowering fields, the flames of the underworld and setting the scenes in the forest, Olympus and the rustic idyls.

On opening night, the Opera Australia Orchestra, under the dynamic baton of Nicolette Fraillon, was in glowing form.

Welch’s choreography is incredibly demanding with lots of darting jumps and turns for Eros in particular and in the pas de deux fiendishly difficult lifts. There are allusions to the Ashton version at times, with the fast fiddly fleet footwork, especially for the women. Folk dances and Greek friezes (as well as perhaps Nijinky’s L’Apres-Midi d’un Faune) are included. For the huge ensemble numbers – the female corps de ballet, Artemis’ army – there are wonderful interlocking patterns of choreography. The various pas de deux are often full of swooping, swooning, ecstatic, slithery curves.

Ako Kondo as the distinguished Sylvia gave a finely nuanced performance with great comic timing and allure and danced superbly.

Her love, the rather naïve, dorkish shepherd, was delightfully danced by Kevin Jackson, who handled his demanding solos magnificently. It is interesting to note that in this version, it is the Shepherd who has the famous ‘pizzicato’ solo, here indicating his melancholy. He is rather in awe of strong, determined Sylvia. Avid David McAllister has a great time in the cameo role as the Older Shepherd in Act 3.

As Artemis, Robyn Hendricks had an aura of power and control, being relentlessly driven in addition to her love for Orion. Adam Bull as Orion has a comparatively minor role, being unfortunately cruelly slain in Act 1 and returning in Act 3 for a lyrical, swooping pas de deux with Hendricks.

Benedicte Bemet is captivating and headstrong as Psyche, pretty in pink. A mortal, she dances with finesse, full of agility and charisma. Her love, the playful love god Eros, was superbly danced by Marcus Morelli, soaring, leaping and darting with explosive jumps and turns.

There is a quartet of darting, bounding, cheeky, mischievous fauns who appear throughout always in the thick of things and delight the audience.

Terrifically danced, it is an interesting chance to see this old-fashioned, rarely performed ballet in this updated, somewhat complicated version.