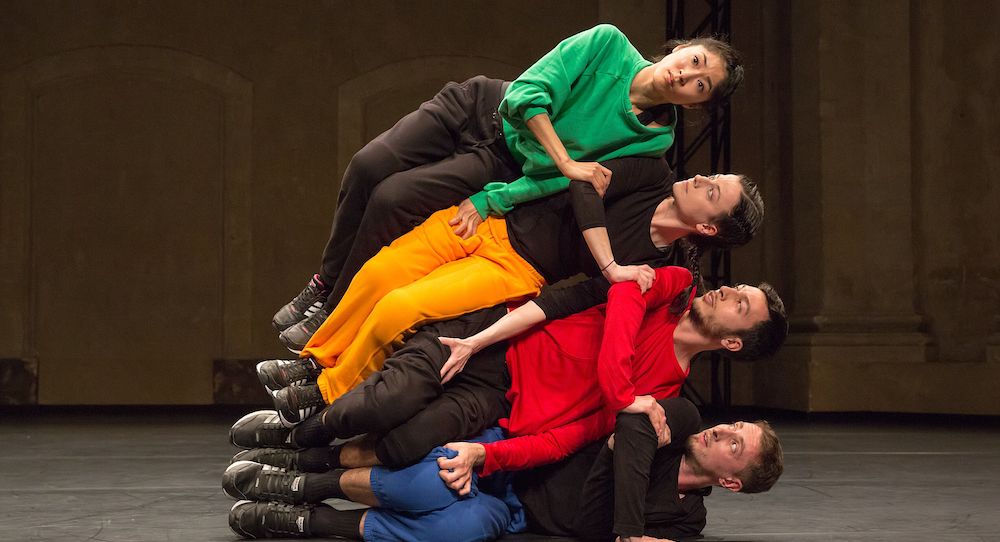 Tetris is a contemporary dance work being presented at the Arts Centre Melbourne this September. Credited as a work for children, Tetris is another example of compelling programming of substantial work for young audiences at the Arts Centre Melbourne. Choreographer and creator Erik Kaiel says Tetris responds to the computer game of the ’80s and ’90s, whilst dealing with human desires for community and individuality.

“We want to belong to the group,” Kaiel tells Dance Informa, “and we want to express who we are (in all our wacky glory). Tetris is a pendulum between those two drives. Tetris was new when I was a pre-teen. I played Tetris all night a few times, and there is definitely a hint of nostalgia involved. But to be honest, I wanted to make a real performance about real human beings using physical imagination to play – put down the controller, get off the couch, and go outside and play with friends. And I thought it would be a funny inversion to name a show about getting back to the real body after a video game and now, having seen how much joy it brings children all over the world, I still have to pinch myself that I get to share it with kids all over the globe.”

A graduate of dance at New York University who made work for 10 years in the US, Kaiel moved to Europe to continue his career. “I don’t think commercially,” he says. “I focus on expressing what needs to be given shape at a particular moment in history, which makes good art, but it isn’t sustainable. So when I had the opportunity to come teach at a dance college in the Netherlands, I thought, ‘Let’s give it a try somewhere where art is a stronger cultural value.’ The work was well received, I got too busy to teach, and now I focus on making dances.”

Kaiel says what sustains him is the audience reaction to his work. “I see the way the young audiences light up when they are fed a substantial meal of imaginative work, and it makes up for long hours, low pay, life on the road, hardscrabble side of the career.” Kaiel says what he loves about this is “to see a sceptical audience come in, and in the course of an hour-long show, transform into a wide-eyed, completely engaged wonderment-filled watcher.” Kaiel describes his work as “an active imagining by the public, so by each show’s end, you are more participant than observer, especially with Tetris. I love seeing the cultural differences during the transition from watcher to co-creator.”

Kaiel describes his next project as “a new quartet about extinctions, climate change and the necessity of immediate action to save our planet. Isn’t it common sense?” This project feels like a big challenge to Kaiel because, he says, “Issue-driven performance can fall flat, feel like propaganda, so I am relishing the challenge of avoiding those pitfalls, and making something artistically substantial that both feeds the imaginative life, and encourages not just good intentions but actual changes in behaviour.”

He adds, “Making shows is about proposing a way of being in the world. I love seeing that moment when it reaches an audience so that they shine as they realize that they matter and that they have agency.”