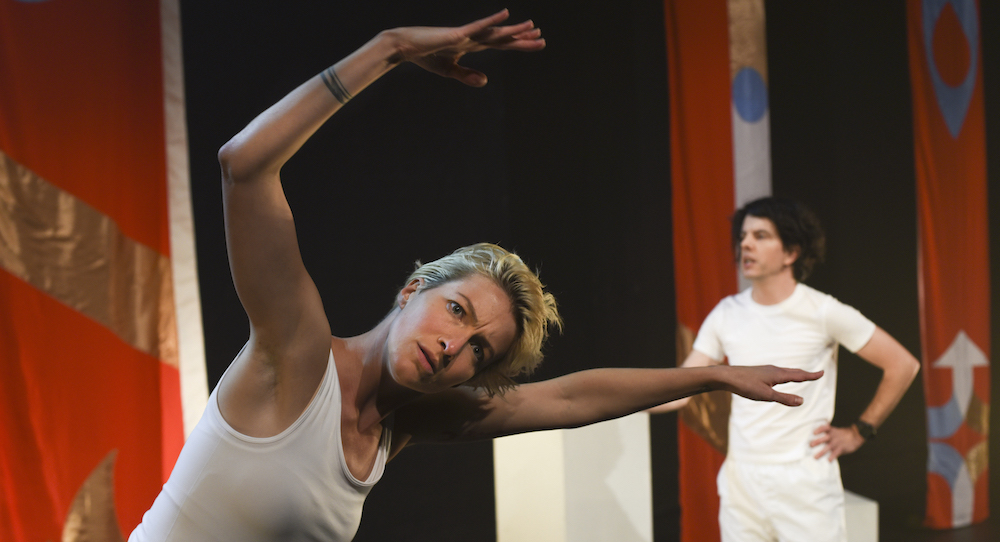 PACT Generations is a thought-provoking, contrasting double bill of contemporary dance (or should that be dance theatre or ‘a performance piece’, as both works included speech?).

First, we saw del Amo’s Arena, performed and devised in collaboration with Anton, who gives a bravura performance, channelling multiple characters, and it is full of incredible energy. Arena, a biting satire on the world of commercial film, consists of a diverse cast of somewhat eccentric characters drawing them into a frenzied world of make-believe. Included among the characters are a  flamboyant gossip, a laconic cleaner and a highly-strung director who battle it out in this deftly imagined mosaic of interlinking stories. We learn about the disasters that befall a production that goes wrong.

Anton, dressed casually in tshirt and jeans, is alone on stage the whole time, and also controls the sound and lighting. As we enter, he is atop a ladder fixing the lighting rig. This is sorted, the cables tidied and stored away. He moves to the control desk, and the show proper begins.

Lighting effects are most atmospheric, at times shadowy, others very clear. Strobe lighting is used in both works, by the way.

The script is acerbic and witty at times, as well as including strong language. Anton also uses a variety of different accents to delineate the various characters.

The tired, shuffling cleaner is most poignant and moving with his memories of his home country.

There is the manic obsessive director who explodes with energy around the room and an older, rather swanky theatrical diva who is spotlit and mostly uses a set of fluid, exquisitely performed arm movements while pronouncing profound thoughts and bitchy comments, and another actor character as well as an unfortunate producer, among others.

Choreographically, there are repeated stylised movements for a couple of the characters, as well as agitated runs, crawling, lying Sphinx-like on the floor and backward walks. There are volcanically erupting movements as the director Anton often uses stylised angular arm movements. Ballet steps are taken and deconstructed; martial arts moves are included, too.

Some props (a lunchbox with a banana, for example) are hidden in wall pockets until needed. There is a charming dance with a huge theatre mop toward the end. Also toward the end is an ironic ‘goodbye’ segment full of various dance styles and sharp comment.

After a short interval came Olympia Olympia!, brought to us by theatre collective Big Muscles Sad Heart – Caitlin Doyle-Markwick, Sarah Easterman and Matte Rochford. It is a biting critique on the politics and aesthetics, savagery, dangers, ruthlessness and beauty of international and Olympic sports.

The set when we enter has long hanging banners of geometric designs – a red background with turquoise, white and gold design. Also visible are the three white plinths for gold, silver and bronze.

Olympia, Olympia! begins and ends with the three performers, in white sports gear, sitting at a bar discussing how their team will go and criticizing other athletes. Supple, vigorous, sometimes unexpected, use of the body is required. The deftly performed work is very tightly choreographed and contains movement references to boxing, synchronised swimming, weightlifting, discus, wrestling and a most exciting, noisy tennis match, some with repeated stylised movement, among others. In one section, there is a precisely controlled duo, walking bodies tightly linked together, with various arm/hand positions by the two women closely monitored by Rochford. Another segment, the track races, is portrayed in slo-mo and uses strobe lighting. There is the ironic lighting of the Olympic flame (with help from an audience member in the front row), the opening ceremony parade, singing of the national anthem, and also, we see the fierce rivalry between competitors. Rochford also acts as a TV commentator, a  coach for the team and umpire at various points.

It becomes quite violent in a way — there are shotgun noises, and the most ruthless athlete wins. At the end, all three are badly injured (indicated by stockings over their heads covering ‘injuries’), and they talk about what they plan to do after the Games.

The evening featured two most intriguing, very different yet complementary works that were strongly performed.