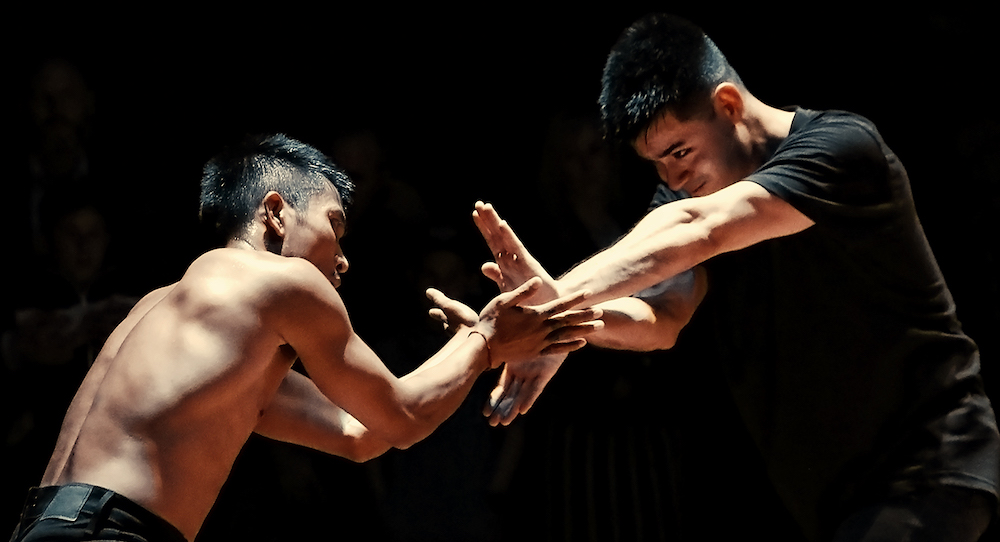 Between Tiny Cities is the second full length production by ex b-boy and now choreographer Nick Power, that uses breakdancing genre to explore the themes of artistic connection between two small globalising cities. Power’s choreography showcases the b-boy (breakdancing) palette that was evident in his previous work Cypher. This includes a performance circle with the audience on the same level as the dancers, the challenge-based break dancing, and the minimalist aesthetic of old school hip hop that relies solely on the casual street styling of the dancers.

In this work, Power moves breakdancing’s street aesthetic beyond the competitive braggadocio and physical tricks as two b-boys, Aaron Lim from Darwin and Erak Mith from Phnom Penh, leap into the circle of fire. Initially, they move around with the sly wariness of two territorial tribes who first come into contact. They probe with moves similar to the Muay Thai pre fight ‘wai kru’, mirroring each other with wary challenges as they seek common ground in their moves.

Much of the dance is an exploration of how two very different dancers in build and style — one dancer significantly taller and broader than the Cambodian hip hopper — try to engage with each other as they seek to bridge the fundamental cultural and geographical gap through the universal language of hip hop. They move through a number of stages that emphasise slow motion battle challenges to a funky shakedown, to a pure breakdance one upmanship and then the highlight – a pas de deux of mirroring b-boys in a curious conjoined hip hop version of Tai Chi.

Jack Priest’s sound design, with its down beat grooves, creates a chilled urban sound scape, supporting the idea that although the dancers spend most of their time diametrically facing each other, they are not opposed to, or in conflict with, each other. Much of this work is a meditation on how breakdancing (or any dancing) can move beyond its roots of competition and opposition toward engagement, cooperation and understanding.

As a short 45-minute work, Between Tiny Cities has a loose, fluid feel of dancing created via improvisation that intrigues the audience but also makes you want more. Could the idea which of seeking common ground be fleshed out in more detail? Overall, it’s an intriguing work in its desire to move hip hop dancing into the realms of contemporary art and engagement.