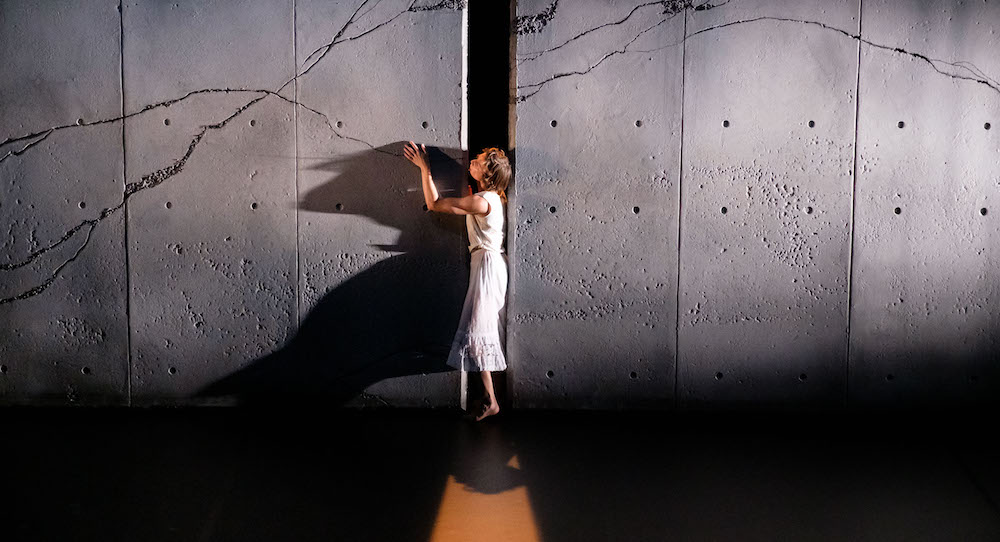 The set is the same for all three works – clear stage space except for what appear to be three concrete panels at the back, which have rows of holes in them. They are also wonderfully textured and can be used as a projection screen or as a map of the landscape.

Ngarlimbah (You are as much a part of me as I am of you) was first on the programme. Walmajarri/Nyikina painter and poet Edwin Lee Mulligan tells the story of two dingoes, the calm Yungngora and the dark dog Jirrilbil whose final resting place is a billabong in the central Kimberley where waterlilies grow. Barefoot Mulligan wears shorts and a top in sort of an army camouflage design. A poem and song are sung in Walmajarri and Nyikina languages and the choreography blends traditional Aboriginal dance and contemporary styles, with runs, birdlike arms, side to side jumps, and at times it is as if Mulligan is hunting/spearfishing, for example. The animation is also crucial to telling the story – there are very scary images of Jirrilbil as a terrifying red eyed demonic dog; but this is contrasted with glowing waterlilies and fish. It is all about Mulliagan’s spiritual link to the land and concern for the environment in this powerful piece.

Miranda Wheen’s work, Miranda, is inspired by the character in Picnic at Hanging Rock and also looks at the awkward position of settler white Australians struggling to comprehend Aboriginal perceptions of land while working out their own understanding of and belonging to it. Wheen as Miranda enters barefoot and wearing a white cotton top and skirt evocative of the era. It is a dark, intense solo, somewhat Ophelia-like that begins with an outstretched hand. There are runs on high demi-pointe, falls to the floor, wild darting jumps and quivering, fluttering hands included. A section from Lindsay’s book is used as voice over (read by Kris McQuade) and Wheen makes a tearful passionate speech. Wheen removes the skirt, revealing shorts and has a frenetic solo which incorporates traditional First Peoples dance. The final section makes great use of shadows, the wonderful texture of the panels and the gap between the three panels and how Miranda vanished through the crack in the Rock. At the end, all we hear is Wheen’s gasping breaths.

The third work on the programme was Dancing With Strangers Wangaaypuwaan/Gumbangirri by dancer and violinist Eric Avery, which imagines an alternate past in which the crew of the Endeavour meet with the dancer’s great-great-grandfather on the southeast coast (the Monaroo region of NSW) instead of sailing by. In this re-imagined version of the past, the sailors come ashore and are welcomed, and the two cultures share dance, music and song. Avery is also most concerned about the environment and climate change.

The stage is cleared except for a large tall standing microphone and the amplified violin Avery uses.  He wears a red tshirt and black shorts and also a special, somewhat tattered and torn reversible coat that represents both the navy jacket worn by the Endeavour crew and also the Aboriginal coat.

At times, the music is relentless and pulsating. Avery performs a poem he wrote about his great–great-grandfather, and two songs are performed in Ngiyampaa langage.

Choreographically, Avery blends contemporary dance steps and traditional Aboriginal  dance, including whirling turns (at one point with one arm bent behind his back), the violin bow used as a spear in a hunting dance. One section of the solo is performed on high demi-pointe. The hand held microphone at one stage is used to “write” the story on the floor, and then on Avery’s body.

Most effective use is made of shadows for a somewhat robotic section of Avery’s solo, which becomes frenetic but undulating and fluid with backward runs, slithery floorwork and high soft jumps.

The ending is both anxious and hopeful with Avery concerned about preserving his stories, culture and language, imagining a possible better future… and fade to black…