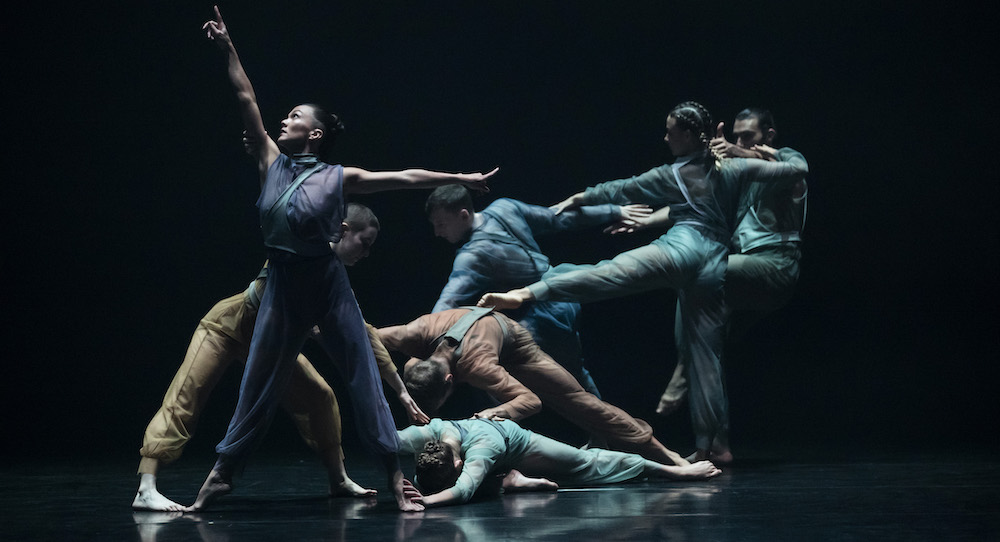 Season One is the first programme celebrating the 50th anniversary of Sydney Dance Company (SDC) – a most exciting triple bill. It is also celebrating Rafael Bonachela’s 10 years now with the company. The dancers are in blindingly brilliant technical form handling the demanding, acrobatic, at times almost impossible choreography with nonchalant ease in a splendid showcase.

First up was Neon Aether by Gabrielle Nankivell. Nankivell explores the concept of the vastness of space, air and the need to interconnect with the universe around us. It is powerful and hypnotic, at times almost dreamlike. The opening was explosive and emphatic. Nankivell’s choreography requires a very flexible back and lots of falls and rolls at one point with an atmosphere of tension and release. The ensemble at times pulsate and undulate, and there are some marvellous pas de deux with unusual partnering. Sometimes, the ensemble run in circles; at other times, the choreography is sinuous and feline. Jumps and handstands are also included. Heads and bodies shake and twist. A single small movement, repeated, can be developed to become a small solo. Solos particularly memorable are for Ariella Casu, Janessa Dufty and Luke Hayward, with a glowing astonishing pas de deux for Jesse Scales and Victor Zarallo. For most of the work, a woman in red (Casu) is an outside observer of the others in the ensemble – toward the end, she performs a breathtaking solo of her own.

Smiles’ score includes the sounds of oxygen masks, sealed doors, crackling radios and a countdown as astronauts prepare to go into space, along with relentless swooshing sounds, thumps, bangs and other noises.

Harriet Oxley has devised a costume for the cast of stylised boiler suits in various colours with semi-transparent sections of fabric. Damien Cooper’s lighting includes snap blackouts and various washes of colour.

Next was Bonachela’s Cinco (“five” in Spanish), using the five parts of Alberto Ginastera’s “String Quartet No. 2” and performed by Davide Di Giovanni, Holly Doyle, Riley Fitzgerald, Chloe Leong and Charmene Yap. It is driven and relentless. Bonachela’s demanding choreography includes spinning, darting leaps, at times dragonfly-like, spiky angular arms at various points, and long, stretched laser-like legs that at times are scissoring. Feline rolls and stretches are included, as are walks on high demi-pointe. The dancers are at times in almost geometric formations.

The costumes for the dancers by Bianca Spender feature floaty Grecian-like tunics for the women, the men in tops and shorts.

Cooper’s lighting also reflects the number five with five spotlights above the stage. At times, the lighting is quite gloomy and builds in intensity; at others, it is burnished or includes starkly dramatic side lighting.

Sorry, but I was disappointed in Woof by Melanie Lane, but the rest of the audience appeared to love it and cheered most enthusiastically. It was originally part of the 2017 New Breed season.

It begins in blackout, then snap! the lights flicker on. The dancers are dressed in Aleisa Jelbart designed flesh coloured or golden costumes. At first, the dancers are like mysterious Anthony Gormely sculptures. At the beginning, they shift and freeze into tableaux, then shift again.

Lane takes ballet movements and restructures them. Football team-like movements are included, as are flying runs. For one section, there is a sense of stretch-control-release. At others, phrases of movement are repeated. Groups shift, form, split and reassemble. Hands are on throats, shoulders held high, heads oscillate, bodies twitch, a woman is held upside down. As the dancers unite to create a pulsating writhing mass, their bodies and costumes gradually become dirtied with the sooty black from their arms.

Clark’s driven score includes a somewhat irregular classical cello at first, that gradually morphs into a pulsing electronic beat like at a nightclub.

Sorry, while yes I admired the dancing, Woof left me rather cold. The triple bill itself is extremely impressive.