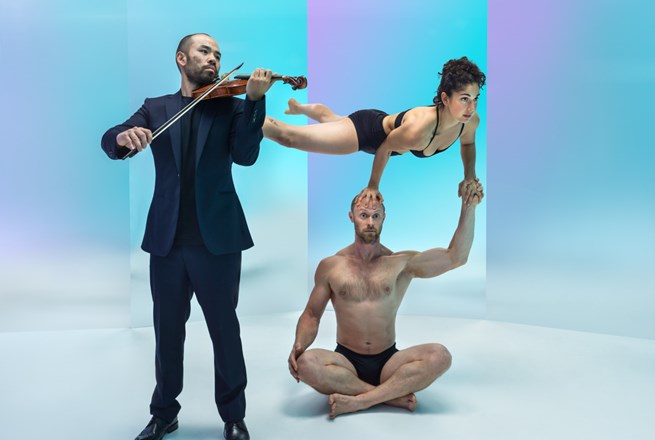 Ever felt like running away to join the circus? Well, here is your opportunity because the circus is coming to town!

Circa Contemporary Circus is touring Australia with English Baroque.

The aesthetics may be different from dance, but the level of “knocking-your-socks-off spectacle” is up there with the “best of” performances. Underpinning this production (a collaboration with the Australian Brandenburg Orchestra) will be English Baroque music, the type of music that resonates through the body long after the performance has finished.

Dance Informa caught up with Yaron Lifschitz, the director and long-time creator of circus spectaculars. We wanted to know things like what are the differences between dance and circus? How is the relationship between music and dance different from music and circus? Can a dancer defect to acrobatics? It’s not that simple, so read on.

What are the major influences on Circa’s beginnings?

“We are probably part of the third wave of Australian contemporary circus, so essentially you try to find your own place in the world. I was heavily influenced by William Forsythe’s work, not so much the work but more the philosophy behind it and thinking about circus as a coherent set of languages, which can be pressured in different ways, rather than adding theatricality or stuff on top of that; and that’s essentially what the work started from. That was one part of it, and then we were also improvising, looking at jazz, making shows to survive and discovering things along the way.

I’m wary of totalising narrative statements after the fact because a lot of things make sense in retrospect. But I think in terms of shows, if you think about postwar dance, the two great pillars are Pina Bausch and William Forsythe. Pina Bausch’s work is in its aesthetic manifestation, while William Forsythe’s work is a philosophical approach looking to influence art forms and people’s thinking.”

How long have you been producing performances such as these?

What is the relationship to the music with a circus company?

“There’s almost always music present in circus, but it’s often not thought about very much. Thinking back to my earliest works with circus was to think about what the music was doing. It was in there to sometimes problematise it, sometimes play with it and sometimes use it as a theme.

What happens with the Brandenburg is we put to music what Paul Dyer comes up with after consultation with myself.”

How is English Baroque going?

“It’s going well. It’s a big show this one. The music is in some ways less thematically obvious than anything I’ve done before. It brings together a kind of strength and heightens the diversity with its mixture of high and low, and it’s not super insular, so it gives a lot of mental range but still allows us with room to move.”

Are you excited about English Baroque?

“Oh yeah. I have a week off here in Sweden, and the company is busily creating and doing some fine-tuning.”

What can we expect from English Baroque?

Paul Dyer and Yaron Lifschitz in rehearsal. Photo courtesy of Circa.

“These performances are genuinely very interesting, and with collaboration such as this with the Brandenburg, there’s a really beautiful energy that’s unlocked. Circus and classical music seem to work really well together because there’s a kind of mutual respect for each other’s virtuosity, but it’s so different.

Most of our artists haven’t heard classical music — the power, the sonic density, the spatiality, the textures of it, things that just don’t come across through earphones or in the room, and it really shatters and blows them away. It’s like beautiful fresh-minted emotions seem to be unlocked. And the Brandenburg really play historically performed practice Baroque music from 1612 in Manheim; this incredibly intellectual and esoteric European performer may have specialised solely in Bach for 10 years.

We want to make it live in the heart and mind and ears of our audiences right now, and let that still resonate with an appropriate historical performance practice, which is what we do. Together with a sense of adventure, openness and curiosity, we can make things happen that other people can’t. I’m such a fan of these collaborations with live classical music – it’s an absolute joy.”

What is the relationship between dance and circus?

“It’s a great question, but I don’t think there’s a single relationship thing in common. Circus can seem dance-like because we have a real focus on the body as the site of expressive meaning. With circus, there is no choreography.

I think dance is focussed on the aesthetics and the physical aesthetics are at the core of dance — a perfect line in ballet, for example — whereas for us, it’s about physical virtuosity.

Circa in rehearsal. Photo courtesy of Circa.

If the perfect performance for a dancer is doing 32, for the circus performer it would be doing fouettés until you fall over. Circus has a lot less density in meaning than dance does. There isn’t the same kind of density of tradition with circus. There’s no documented choreography, for example. We don’t even count beats the same way. We can if we want to, but we don’t need it. For me, circus exists for its musical heart, which is more like jazz. You can stretch it in different directions. I talk about the right/wrong, you want to be slightly in front of, or slightly behind, and only occasionally capturing the heroic moment in the middle of the beat or the piece where we all come together, otherwise it can seem kind of naff. So when we talk about the performance density of languages, what we fall back on is pop-music timing and complexity.”

You have dancers in the troupe, is that preferred? Or a mix of both circus performers and dancers?

“No, it’s a very specific discipline, and we work exclusively with acrobats.”

How do dance audiences respond?

“Oh, they love it. We’ll be touring Jacob’s Pillow in the US next. We’ve done a number of key dance festivals around the world, including performing at the Barbican in London, as well as Australian festivals.”

What can we expect from English Baroque?

“It’s a really exciting project, with a lot of new things that audiences haven’t seen before. There’s a lot of playfulness and lyricism. It’s really about this night when the court and the lovers and the fairground all kind of mix together to create something very beautiful. It’s quite poetic, quite lyrical, but it has some very strong physical circus acts in it as well.”

Circa’s English Baroque will be the third collaboration with Paul Dyer, the Brandenburg Orchestra’s co-founder and artistic director, having commenced the collaboration in 2015. The premiere will be in Canberra as part of Canberra International Music Festival in Australia’s capital on 2 May, followed by performances in Sydney, Melbourne and Brisbane throughout May. For tickets and more information, visit circa.org.au/show/english-baroque.