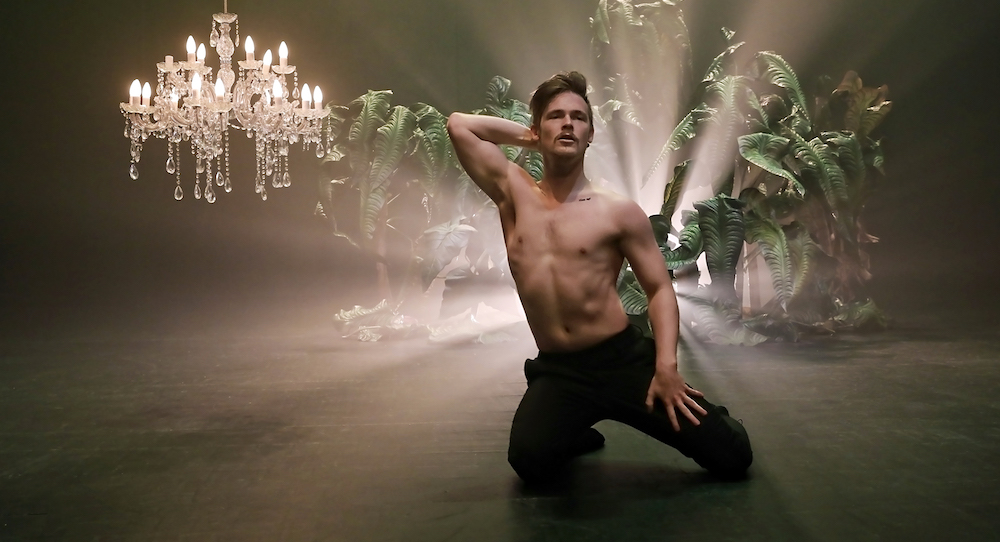 It’s like a jungle sometimes, it makes me wonder how I keep from going under…

At first glance, the connection between the 1983 hip hop hit that the above lines comes from (Grandmaster Flash’s “The Message”) and Australian choreographer Shaun Parker’s latest full length contemporary work (KING) may not be obvious. Yet when you see the set and the metaphor it implies, and observe that the ensemble is a group of nine young street dancers, the thematic links becomes clear.

As the creator/choreographer of KING reveals, “It’s set partly in a high end cocktail bar and a jungle. So our set has a beautiful real jungle, as in live plants on stage. Then you juxtapose that with the bar, where all the men are in tuxedos, and you start to understand what I’m driving at.”

The city (or society) as jungle is a motif we’re all familiar with. We all know how thin the veneer of civilisation is, and the more historically literate amongst us will also recall that for most of the approximately quarter million year history of Homo sapiens we have lived and foraged in much closer proximity to what we now call nature. Parker’s five-year choreographic and intellectual investigation into the pre-modern human condition and the mechanics of evolution has led him to ask deep and sometimes polarising questions about instinct, maleness and power. In this light, KING’s collision of elite urban refinement and universal animality is both timely and, possibly, explosive.

“Some elite powerful men, and women, really think they are privileged, that they do have it all,” Parker notes. “But we soon find that although there’s this sense of opulence, there are also these more instinctive elements of humanity underpinning all that, especially with the jungle, because that taps into a time before there was society.”

Of course, in the current climate of amplified and distorted polemic, any discussion of men and power is loaded. That KING opens this month in a pre-election atmosphere febrile with the noise of contention is not lost on Shaun Parker. After all, he is used to touching on difficult topics, as his award-winning and much loved “bullying” piece The Yard attests. However, as an avowed science nerd and someone who looks to situate his works in identifiable socio-cultural contexts, he is largely undaunted by the possibility of feather ruffling.

“I began the work by looking at the Y chromosome, at scientific ideas based around the Y and how that affects gender and other things; so in a way, the work has grown from there,” he elaborates. “I must admit, I was really inspired by the Trump aspect, too. That kind of old school male model; you know, with the use of manipulative force and abuse of power. I personally think that we need to talk about what that kind of male power is, guys like Trump and Kim Jong-Un, and what it means for whole world.”

Even though the marketing sorts will resort to lurid terminology like “toxic masculinity” to drive profile and generate ticket sales for KING, Parker’s intentions are more nuanced. As he says, “What kind of maleness? Because there’s different kinds. I see it with my dancers. They look like real men, they don’t look like the pretty ballet dancer, and they dance and move like real people, and I really like that. But they display many aspects of maleness. There’s tenderness and also different modes of sexuality that emerge during the work. Although I thought it was important to show the brutality of men, I also wanted to highlight the tenderness. Also, I wanted to look at how certain male power structures need to be brought down.”

Indeed, KING encapsulates Parker’s curiosity about maleness in the fascinating form of Bulgarian dancer-turned-singer, Ivo Dimchev, who will make his Australian debut as the narrative lynchpin of the work. “Ivo is very non-gender specific,” Parker explains. “He’s gender fluid in a way. He’s male, he’s female, he’s both. He looks very male and female but also sings that way. So, he’s a wonderful counterpoint because he’s not hyper-masculine, and his presence shows different sides of possible maleness.”

However, Parker is far from naïve. He knows that his latest work will be thrown into the fray of a meme-driven bickerfest and invite all kinds of narrow political appraisal. “Discussion needs to be had,” he contends, “but I’m always more interested in investigations and interrogating things. Because I’m a science nerd, I like to look stuff up rather than just getting on bandwagons. I think in the end, it’s better for everyone to have a mature, decent discussion.”

And yet, underlying the theory and the fracas, shared humanity. As Parker muses, “We are so in denial about everything that’s happened before. Biology, evolution, body chemistry. We’re so digital now, and it’s like, what happened to the jungle? But it’s in us all. We’ve had millions of years of evolution to get where we are, from being single celled organisms right through to now. We’re still the accumulation of all of that, even if we pretend we’re not.”

In the end, Parker brings the jungle back; and in that jungle, a king. What this points at is our species’ vexed relationship with power. “Society will often hand power over to people,” Parker states, “but if they then get intoxicated by that power and control, then society needs to bring them back down.”

The king is dead. Long live the king!