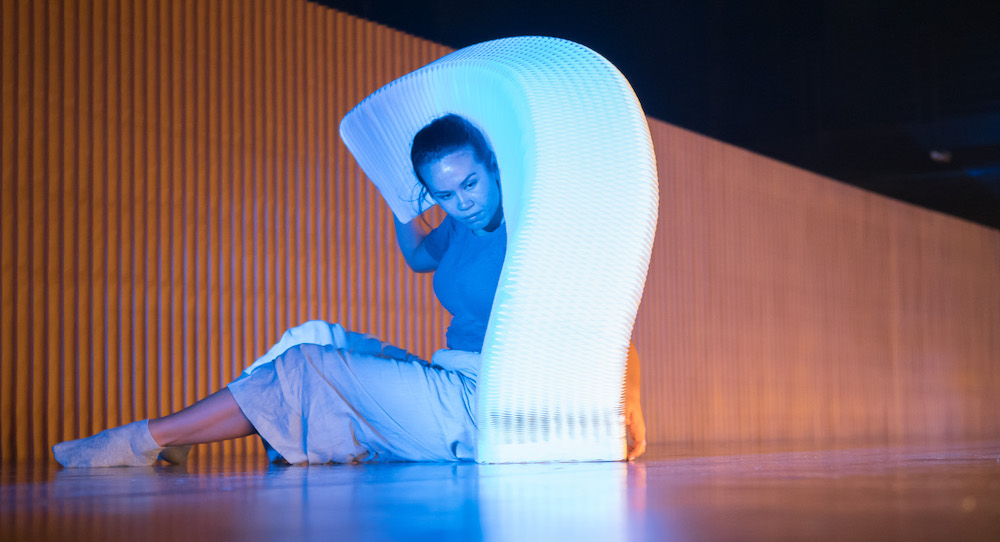 There is a delightful paradox at play right now: the constancy of change. Indeed, if there is one thing that unifies everything in our universe, it is the process of permanent flux. (We could go deeper here, but this is a dance publication, so let’s park the metaphysical musing for a while and come back to Earth – or rather, to a space where dance takes place.)

Meet Alison Currie, Adelaide-based choreographer and creator of Concrete Impermanence, which will be re-staged in Melbourne this March, as part of the biennial Dance Massive festival. It is a work for three dancers and a number of cardboard objects that examines the uncertainties of the world and, in contrast, the absolute certainty of change.

“We do set up things in our lives to make us feel like things are permanent, but they’re all false,” she declares upfront. “We need to believe in these kinds of constructs in order to maintain a norm. And so Concrete Impermanence is a play on words, as in, change is the only constant.”

Dance is surely one of the most apt and appropriate means of both exploring and encapsulating this idea. Like all live performative art, it flickers briefly before fading to memory. Add to this the ephemerality of the human form, and the fragility of things is evident.

Yet, amidst the ever-moving palette of bodies, light and sound, Currie has inserted an array of inanimate objects. As she explains, “They’re actually furniture. Room dividers and chairs. It’s concertina cardboard that expands quite dramatically and quickly; and so what drew me to those was that you could really quickly change the look and feel of the space. So, not only is the dance moving constantly, but so is the landscape.”

Here again, there is metaphoric nuance. Think of paper as “paper thin”, as being a surface, and a blank one at that. This may well be the gossamer of our shared delusion. Our communal fantasy of substance.

This is precisely the kind of rich subtext that Currie has been exploring throughout her career, one in which she has often used objects on stage. Perhaps inspired by her sister (a visual artist who works a lot with sculpture), she has a long standing fascination with the form, space and weight of objects and of how they can be choreographed.

“Because I’ve been working with objects for quite some time, it’s a multitude of things that inspire me and it keeps shifting,” she states. “What’s emotionally strong for me now is this notion of humans and creatures and the environment being treated as commodities, and so working with an object on stage can transfer emotional and/or human qualities to that object and, in response, it can be taken awayfrom the human. In a way it devalues the performer and gives the value to the object. So you kinda play with this line between the dancer controlling the object and the other way round.”

Insofar as Concrete Impermanence is concerned, she adds, “On a practical level there were so many thoughts about ‘why cardboard and paper?’ and initially we were looking at this feeling of unpredictability and change in one’s own life, which can be really brought to the fore when something dramatic happens, or it can be compounded by events in the larger world.”

As a result, the work is less esoteric than it might otherwise sound. Here again, this reflects a through-line in Currie’s practise. Since she first won acclaim for her work 42a, which received the inaugural Arts SA triennial project grant back in 2007, she has not only been choreographing objects but finding ways to make her work accessible to people with sight and hearing issues. When Concrete Permanencepremiered at the Space Theatre in Adelaide it was audio described and for its appearance at Dance Massive it will have what she calls a “deaf access component.”

She further explains that an onstage screen, suffused with “an orange kinda static” will fluctuate in time with composer Alisdair Macindoe’s sound design. Currie and Macindoe worked with multimedia artist Jason Lam to create an algorithm that translates music into visuals. “It changes with each key moment in the soundtrack,” Currie says. “So, at one point there’s a sine wave in the sound and that’s visible in the crackling on the screen.”

The staging also includes the creative use of microphones. “The space is live mic’ed; so there’s hanging mics and floor mics that pick up the sounds of the objects and the dancers. There’s quite a sound to the dragging of the objects and, I dunno, it adds a kind of intensity. The deaf audience members we’ve had did comment that they could feel the vibrations as well as see the screen. I was very pleased to hear that that was working for people.”

In the ever changing world to which the work refers, there is a beautiful quixotic quality to both the fact of dancing and the care taken to allow ever more people to enjoy the briefly flickering spectacle. It may not be a permanent fix but it is a concrete means of including more of us in the entropic theatre of culture.

Alison Currie’s Concrete Impermanence will run 17 – 18 March at Dancehouse as part of this year’s Dance Massive. For tickets, click here.