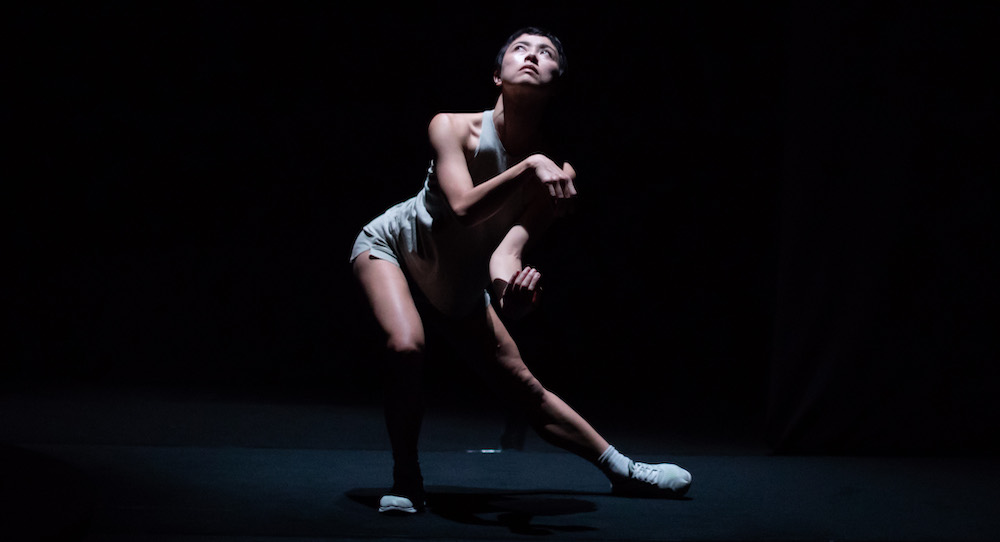 Kristina Chan has been described as “a beguiling dancer”. When I mention this at the beginning of our interview, she is intrigued and not sure what to make of it. “I’m always pretty critical of myself and my own dancing, but I can say that there must be a certain something that I have that has got me this far in my career.”

She continues, “I find it very difficult to watch myself dance on video, and I am very critical, so perhaps that’s why I’ve become the dancer I’ve become. But ‘beguiling’…I don’t know.”

Chan has certainly had an enviable career as an independent dancer; her name came to the forefront following the success of her first work when it was performed to critical acclaim at New Breed 2015.

“I created a work called Conform, which looked at love and toxic masculinity.” Chan was interested in looking at the pressures put on men in today’s society and as a female questioning what that might mean for them after reading a book called The Will to Change: Men, Masculinity and Love written by feminist author, bell hooks.

“It goes into some some dark places as well as looking at societal structures,” Chan explains. “But I just made a dance piece that was inspired by that reading.”

New Breed 2015 was a wonderful opportunity and a major turning point for Chan, who had the opportunity to choreograph an all-male work with the “amazing Sydney Dance Company dancers. That experience propelled me in a few different ways, including starting my major work – A Faint Existence, my first major work – and it was definitely the longest, journey, a four-year process.”

At this time, Chan was just starting out as a choreographer, so she was asking herself a lot of questions and what her work would be about.

She explains that she wasn’t working on it consistently for four years, and it was really a “slow burn”, adding, “It did take time to work out what I wanted to put into it, and as my first major work, I wanted to put everything into it!”

In terms of time, Chan estimates that she spent about two weeks’ development time per year concentrating on the work.

A Faint Existence is a solo performance, and there were a lot of iterations along the way. The work essentially is about Chan’s interest in climate change and how we as individuals can make a difference.

“But my focus goes beyond that now, so it’s not about doom and gloom but how we can progress forward, and how we can transform,” she shares.

It was first presented in 2016 at Carriageworks as part of Performance Space’s Live Works Festival before heading to the Sydney Opera House in 2018, for the UnWrapped Series in 2018.

“This year’s performance at Dance Massive will be its third season, and I’m still learning about it,” Chan admits.

How long is the performance?

The timing varies and is dependent on the interaction between Chan and her close collaborator, James Brown, who plays the electronic score live from the lighting box. So there’s some room to play with the choreography and the flow between the two artists.

“In a way, it’s like a duet,” Chan adds. ”James is playing the music and responds to me as much as I respond to him.”

Brown and Chan started working together on the work four years ago, using a lot of improvisation, followed by talking about the work, and have obviously developed a complicity where they allow each other a degree of flexibility – sometimes with Chan moving in a different direction, or Brown drawing out the music, responding to each other whilst respecting the very strong underlying structures within the piece.

“The piece is constantly evolving, and within the set score and the choreography, I do have a lot of play, so the timing can stretch,” Chan adds.

A Faint Existence benefitted from the support of Force Majeure and, in particular, Kate Champion, who at that time wanted to open up the company to support new work, resulting in the offer to Chan to provide in kind production.

Chan also acknowledges dramaturg Victoria Hunt for providing “an outside eye” and says, “Victoria was very intuitive, looking at subtle and intricate areas. A dramaturg is there to make sure the message is coming across to the audience and is vital to the production.”

Add to the mix Tali Corin, who had a huge impact on the development of the work in its early stages, while Benjamin Cistern created conceptual lighting to represent  transformation, with Claire Britton having the major role of the look and feel of the work.

There were a number of collaborators all working on the piece, “but all of us worked really well together,” Chan explains, “with the concepts and all the elements coming together.”

When asked what A Faint Existence means for Chan, she gets a bit emotional.

“When I’m performing it, it feels like it’s a precious gem,” Chan describes. “It’s beyond me; it’s a collaboration speaking about the earth and our faint existence on this earth. It’s existential. I love performing the work. It exists over and beyond what we have made, trying to get across the idea of dehumanising things and not being so individual. We don’t own the earth or the universe; it doesn’t belong to us.”

And for the audience? Chan hopes that those who witness this gem of a work will allow themselves to be transported to another place and time and afterward think quietly about what they can do as individuals to have an impact.

Don’t miss Kristina Chan in her solo performance of a A Faint Existence at Dance Massive 2019 Melbourne. Two performances only – 16th and 17th March. For tickets and more information, visit dancemassive.com.au/program/a-faint-existence.