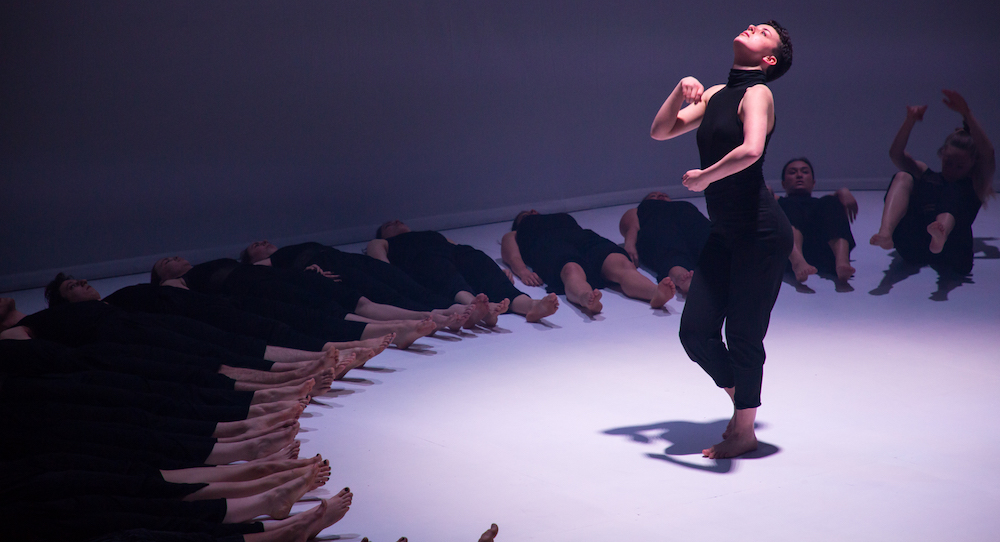 Colossus is the realisation of a dream for Stephanie Lake, who has always been fascinated by the urban landscape in all its diversity, masses of bodies and the potential for chaos that rarely eventuates.

The attraction to use large numbers of dancers allows possibilities to fluctuate between the macro and the micro. As Lake explains, “You can create grand complex patterns with the whole cast, then decide to zoom in and focus on just one or two dancers. I seem to be drawn to the slippage between hyper-organised unison with intricate patterns, and a wilder animalistic chaos. There’s often a juxtaposition of chaos and control in my work.”

Colossus exhibits the whole in a wonderful balance. Starting with precise synchronised micro movements at the outset, before building to a climax with everyone on stage eventually caught up in a vortex of living, breathing chaotic humanity as they run wildly and randomly.

As the audience files into the Arts Centre Fairfax Studio, there is already an air of anticipation and expectation, having been told that the doors will open at 7:30pm sharp, knowing that the show has been sold out and that there is only unreserved seating.

Lying perfectly still, 50 performers are in a wheel formation, feet to the centre on the stage. “Oh, they’re bodies,” someone noted as we filed in.

The “bodies” slowly came to life with a high degree of precision and perfect synchronisation, to the spoken and signalled demands of a lone female while a “bleep” soundtrack gives the impression of switching on 50 robots?

Added to this is an intrigue, as the audience seems to become caught up in this mix of bodies, mesmerised and immersed in another world order. The futuristic “bleeping” soundtrack heightens the idea of being under the power of a leader, with “clones” responding in perfect unison without question, until there is a shift and we start to see smaller groups emerge, as well as individuals breaking out of the group order.

The dancing is without fault, despite more emerging dance artists being on stage from the Victorian College of the Arts and Transit Dance than professionals.

The audience is seated in an amphitheatre looking down on the stage. There are two white screens forming a corner with perfectly understated lighting provided by Bosco Shaw. As we near the end of the program, the elongated shadows that Bosco Shaw throws onto the screens confound our sense of real and imagined bodies, as it all combines to create a moving, shadowy mass of bodies.

In just under an hour, we have been taken to another world and experienced something that is wildly mesmerising…yet somehow simple. The robotic soundtrack on a continuous “loop” from composer Robin Fox provides a stable base from which everything can emerge and expand.

Lake has fulfilled her dream to create Colossus, a co-existence of overflowing, intertwining bodies, in all their beauty and diversity, as they play out the drama and challenges of the collective experience while seeking individual expression.

When the performance comes to an end, there is stillness and a silence as if we’re not exactly sure what we have just witnessed…before a standing ovation.