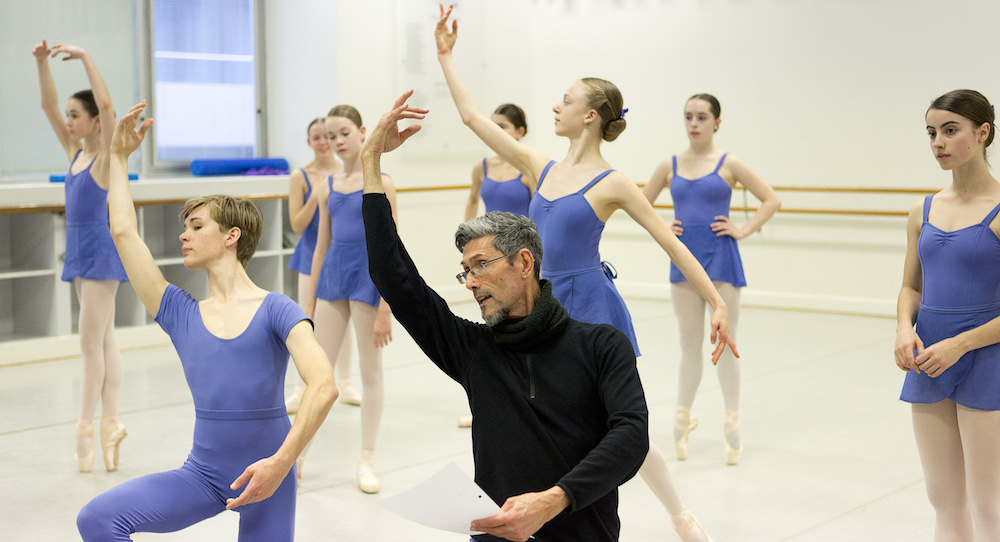 From its Southbank campus just metres from the river in the heart of Melbourne, The Australian Ballet School is without doubt one of this country’s most prestigious arts training institutions and has, across its more than 50-year history, produced generations of dance talent. Indeed, with its sibling connection to Australia’s flagship company, it is widely regarded as the best available path to a career with the national ballet and beyond. 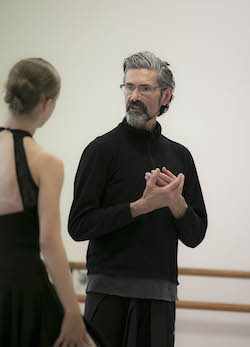 Simon Dow with a student. Photo by Lynette Wills.

Thus, as it does every year, the school’s upcoming showcase season piles on the pressure for all 118 students and their trainers. As one of the campus’ resident teacher/choreographers (and a former student himself), Simon Dow knows all about the stresses involved with elite level performance, having graduated from the School and gone on to an internationally successful career both on and off stage.

“Usually within days following the showcase, David McAllister, the artistic director of The Australian Ballet, will have the defining interview with the graduate students to let them know whether or not they’ll be offered a contract,” Dow reveals. “So yeah, it’s a massive, massive performance for them.”

The Australian Ballet School takes its students through an eight-year/level programme, with the graduating age typically being 18-19. As such, Dow and the other teachers literally watch their charges grow up, not merely as performers but as people. “On the evening of showcase, across the teaching staff, there’s very rarely a dry eye in the house,” he admits. “You know, we’ve known some of the kids since they were 10, 12 years old, and to see the culmination of their hard work can be quite emotional.” 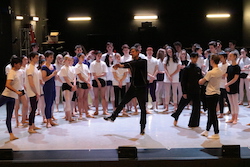 However, Showcase 2018 is not just about the senior kids; it’s an onstage moment for all the levels, and indeed the opening number is a Grand Défilé (or big parade) featuring every student. Elsewhere, students will perform new and specifically created short works that will range from classical to more modern forms. There will even be a splash of tango influence. As Dow explains, “What people will see in this showcase performance is an overview, starting at the very beginning and going right through to the final year students. Each level is given a work that focuses on them in particular; but of course it’s heavily weighted toward the level eight students, because we consider them pre-professional.”

In this regard, the showcase exercise sits at the pointy end of the school’s purpose. It exists, after all, to nurture future talent, to act as a conduit for young dancers to work their way into the ranks of The Australian Ballet or other professional companies. Reflecting on this, Dow states, “We have a lot of depth in our training program, so we prepare them over two years for what we call career management, which is all about getting them ready for entry into the professional world; and that includes auditioning and understanding how to communicate with Artistic Directors and choreographers, so by the time they reach this ultimate point in their training, they’re very prepared. And yet, as you would imagine, that particular day [showcase] is very heightened emotionally.” 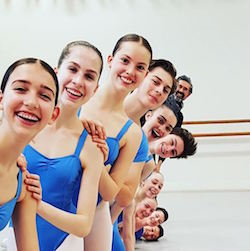 However, as a former Principal Dancer both here and overseas and an erstwhile Artistic Director of the West Australian Ballet, Dow is au fait with the personal and physical rigours of a life in classical ballet. The result, in teaching terms, is a determination not simply to train up skilled technical dancers but to sow the seeds of the broader based maturity needed to deal with both success and/or the lack thereof. It is, as you might imagine, as tricky a balance as any ballet manoeuvre.

“My teaching method is very much oriented to the whole person, and I just love the ones that surprise you,” he elaborates. “You know, they’re working well and they’re on a particular progression arc and then suddenly they have this sort of express movement in an upward direction. Actually, it happened just yesterday when we were rehearsing one of the showcase pieces.”

With the school’s three showcase events just around the corner (one in Melbourne September 9, two in Canberra September 22) teacher Dow takes a moment to ponder his own pathway from young hopeful to star to mentor. “This has been a massive maturing trajectory for me as well. I’ve been incredibly fortunate in so many ways, and it feels like this amazing opportunity – and this sounds so hackneyed – but to give back. I think the greatest gift a teacher can give their students is the information to do it themselves.” 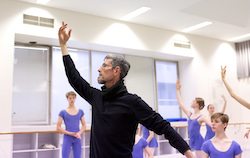 Meanwhile, as the days tick down to the pupils’ big moment, the teacher offers one final reflection on the making of a great dancer and the creation of their beautiful art. “It’s about being so incredibly present and committed in their approach that a witness is just pulled in,” he contends. “I think that that transformative moment when a young person allows themselves to go there is just really magic, and I often feel very humble to be in the presence of someone who takes that great leap of faith and just opens themself up as a human.”

And so, when the curtain rises on Showcase 2018, there will be a whole lot more than counts, steps and lines on trial.

The Australian Ballet School’s Showcase 2018 will be held in Melbourne on 9 September, and in Canberra on 22 September. For tickets and more information, visit www.australianballetschool.com.au.