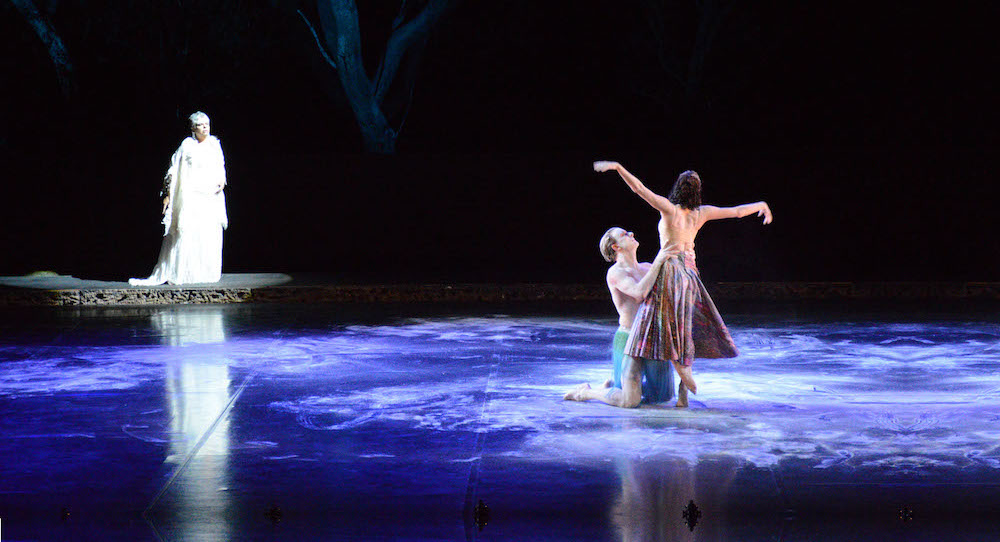 “Where I am coming from, we are not really making such a difference between classically trained dancers and contemporary dancers,” declares Aurélien Scannella, the West Australian Ballet (WAB)’s Belgian-born artistic director. “I would never say that I am a classical ballet dancer; I would just say I’m a dancer. At the end of the day, all dancers are speaking the same language.”

West Australian Ballet warming up on stage at The Quarry Amphitheatre. Photo by Tony Currie.

He is keen for us to understand this because the company he heads has just announced that its 2019 Perth Festival season at the famed Quarry Amphitheatre at City Beach will involve a tripartite collaboration between the Ballet, local contemporary outfit Co3 and the award-winning, internationally recognised Australian choreographer Garry Stewart, the current AD of Adelaide’s Australian Dance Theatre (ADT). It is a bold commission, one that seeks to bring disciplines and dance companies together under the direction of a third party creator, and then put them in an outdoor venue.

However, Scannella insists that this is not an exercise in fashionable fusion. “Yeah, I’m certainly not doing this to tick a box,” he says. “Our company has never just performed only the big classics; in fact, this company has performed contemporary works since its beginning.”

Indeed, the WAB’s embrace of the contemporary is very much part of the thinking behind the involvement of the newly created Co3. Since its inception in 2015, WA’s new flagship contemporary company, led by Raewyn Hill, has struggled against a backdrop of the state’s mining-lead downturn and, of course, to establish a following. Scannella is hopeful that Co3’s inclusion in this ambitious, mainstage work will further enrich the company’s reputation and, as a corollary, bolster the overall dance ecology in the world’s most isolated capital city. After all, as he reiterates, “We are all speaking one language. We are all dancers.”

To this end, the recruitment of ADT’s Garry Stewart is pivotal. Scannella is not merely an admirer but recognises Stewart’s cross-discipline versatility. “The first time Garry and I met was in France,” Scannella recalls. “He was creating work for a company that I was at, and my wife was also working with; so I’ve seen his work done for classical trained dancers and also for his own company, which is totally different. And both work. So when I had this project in mind, I thought of him immediately, and I said to him, ‘What I don’t want is just to mix everybody and have a gig together.’ Our female dancers will be on pointe shoes, but he will also create other movement on flat shoes, for our dancers and the Co3 dancers.”

The other notable feature of the work will be its setting. For more than a quarter of a century, WAB has been showcased as part of the Perth Festival at the Quarry. Indeed, the Ballet’s Quarry season is a much loved staple of the festival. For someone born and raised in the world of European dance, the prospect of staging works outdoors during the height of the Australian summer is clearly invigorating.

“Personally, I’ve never seen something like it; it’s just amazing,” Scannella admits. “Yes, there are lots of restrictions; so every time I commission or buy existing works, I always explain to the choreographer that we will be performing at an open air venue. Some choreographers refuse, because for some of them the lighting is very important, but most say yes; and we always find a way to make it work.”

Having danced previously with luminaries like Forsythe, Kylian and Preljocaj, Scannella is well versed in both the modernising aesthetic and technical rigour of post-War staging and choreography. In this context, the Quarry setting and the three-way collaboration are simply part of ballet’s ongoing development. “I like to say that WA Ballet is a neo-classical company; and working with people like Billy Forsythe is part of being versatile. So, although his steps are always extreme, they are always so classical. Again, it’s another example that classical ballet is there wherever you look.”

West Australian Ballet warming up on stage at The Quarry Amphitheatre. Photo by Tony Currie.

This assertion hints at something that bucks the current orthodoxy. Unlike many, Scannella does not believe that classical ballet is in a battle for “relevance” and that, in fact, the form is avowedly alive and strong. As he likes to argue, “There was a wave in Europe about 20 years ago when everybody said, ‘Now this is what we have to do because it is the 21st century and blah, blah, blah, blah,’ but nobody was really selling tickets. Auditoriums were empty. You know, I experienced that myself a lot when I was in Germany; so nowadays, the classics are back for good.”

Having arrived in Perth in 2013, he believes that Australians are experiencing what Europeans went through around the turn of the century.“Sooner or later, people will realise that classical ballet is vital, it’s still here and it is important because when people come to the theatre they want to spend two hours watching beautiful sets, beautiful costumes, nice music with an orchestra, and a love story or a fairy tale on stage,” Scannella says. “Only ballet can offer this.”