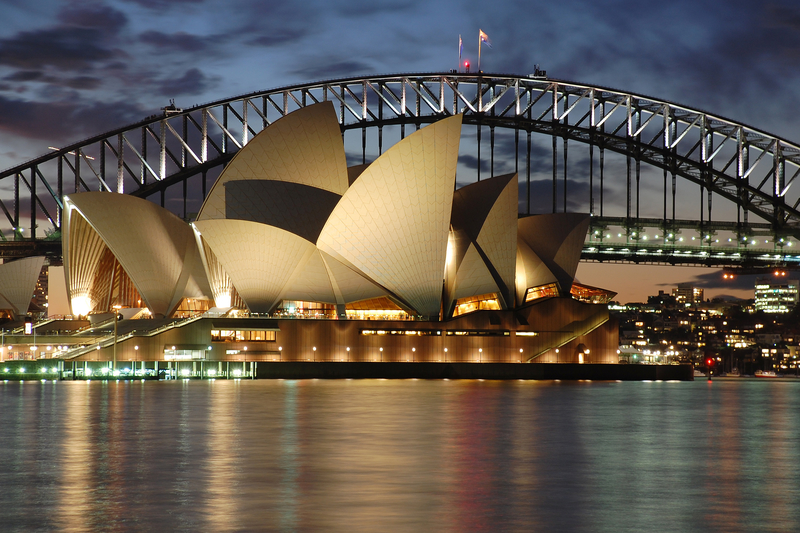 The next instalment of Dance Informa’s series, Iconic Dance Spaces Around the World, looks at the Sydney Opera House in Sydney, Australia.

One of the most recognisable and iconic architectural buildings in the world, the Sydney Opera House, seemly floats on the harbour, its glistening sail-like forms perfectly suited to the location – a peninsula that curves and blends with the curvature of the building itself.

Following a worldwide architectural competition, it was Jørn Utzon, a relatively unknown Danish architect, who claimed the prize in 1957. Utzon’s design of concrete shells confounded the engineers for years before Utzon himself found a solution based on segments of a sphere (“the spherical solution”), based on segments of an orange.

It certainly creates a stunning spectacle on the harbour, but does it perform as well on the inside as it does on the outside?

Having commenced construction in March 1959, Utzon’s internal design was becoming difficult and costly. In an attempt to save funds, the internal spaces would no longer correspond to Utzon’s designs leading to “…a bitter falling out between the NSW government and the architect.” Losing the battle to maintain the integrity of his internal design, Utzon left Australia in 1966, never to return. As one commentator remarked, “The internal designs were left to a conspiracy of nobodies.”

The Opera House opened in 1973, but significant issues remained. There is insufficient space to accommodate large opera and ballet productions due to the lack of “behind the scenes” space and narrow wings. Over the years, this has resulted in international productions such as the Paris Opera Ballet and other companies choosing to perform in Brisbane or Melbourne rather than in Sydney.

Beneath the sails, you will find six spaces available in the Opera House, four of which are used for dance. The Playhouse is for more intimate productions such as hip hop, cabaret and burlesque. The audience is seated above and around four sides of the expansive timber sprung floor.

The Drama Theatre is ideal for smaller dance productions and is the home to Bangarra Dance Theatre, Australia’s premier Indigenous dance company, as well as smaller dance works such as Sylvie Guillem (previously premiere danseuse with Paris Opera Ballet) and the Akram Khan Company, amongst many others.

The Concert Hall is primarily used for music, attracting both international and national philharmonic orchestras, as well as global superstars such as Prince.

But it is also a dance spectacular like no other in the complex. Situated under the largest “shell” of the building, the cavernous curved space with levered timber acoustic “petals”, this stage is used for local eisteddfods to national and international dance competitions, from circus to hard rock, tango to flamenco.

Supporting the performers, there are dressing rooms (some with harbour views), an expansive green room and state-of-the-art rehearsal spaces, designed to accommodate either dance or musical rehearsals.

The Joan Sutherland Theatre is home to The Australian Ballet and Opera Australia, with seating for more than 1,500 guests and an orchestra pit for 70 musicians. Along with the Concert Hall, these areas have recently undergone extensive renewal, the first since the Opera House opened in 1973.

The major works include the installation of state-of-the-art acoustics, improvements to the logistics associated with internal rigging and flying systems, and better access to all things required on stage. David McAllister, The Australian Ballet’s artistic director, is excited about the improvements that have taken place.

“To know that the best technology in the world is being used in the theatre gives everyone a feeling that they can do their best work,” McAllister says. “The Opera Theatre is the hardest working theatre in the complex with over 200 performances each year. These performances often involve an incredible amount of scene changes, which means bringing sets up on a lift that covers the entire stage.”

He continues, “With the renewal project we’re using technology that allows for a quieter and faster lift which can operate during performances rather than waiting for intermission – often a logistical nightmare.”

And whereas the old lift was only used for sets, the new one can take people on and off the stage. It will also be able to carry horses, used in the odd opera such as Carmen. “Horses like it smooth,” says Theatre Integration Manager Rosicky. “They’ll love the new lift.”

The renewal project has been, to an extent, an attempt to remove the tarnish associated with the lack of respect for Utzon’s interior vision.

Part of the genius of the Opera House is based on Utzon’s determination to make a performance space par excellence as expressed in his design principle,

“Everything that is planned for the Opera House is based on the desire to take people from their daily routine into a world of fantasy, a world which they can share with the musicians and actors.” Jørn Utzen, July 1964.

In 2007, the Sydney Opera House was formally recognised as one of the most outstanding places on earth with its inclusion on the UNESCO World Heritage List under the World Heritage Convention.