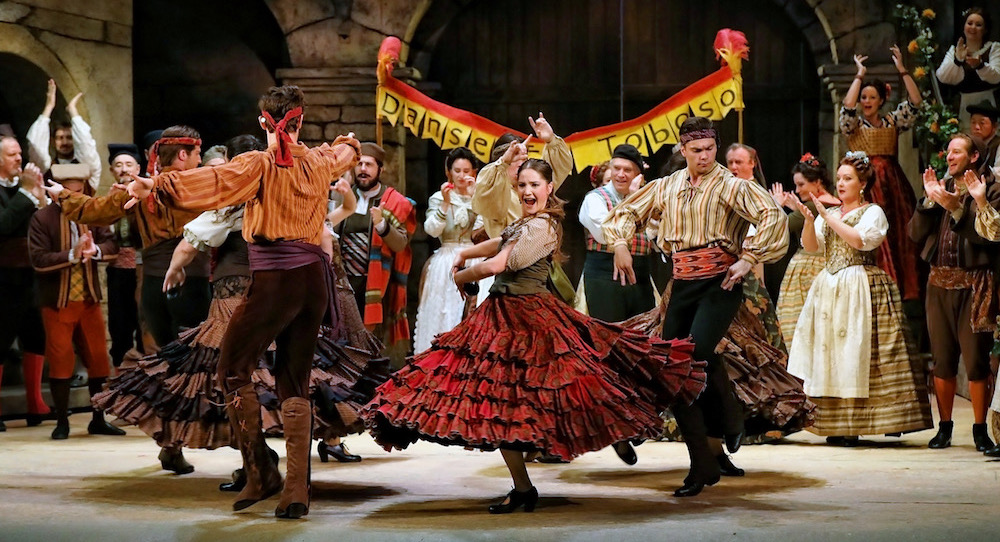 The list of famous people who started out as street performers includes such luminaries as BB King, Tracy Chapman and Rod Stewart. They are mostly singers, musicians and comedians; rarely are they dancers, especially dancers from traditional and classical genres.

But for Naima Amar Lopez, who was dancing Flamenco in Sydney’s Pitt Street Mall to attract an audience and earn a bit money, it was fate that Opera Australia’s Guest Choreographer Tomás Dietz, heard the music and was at that time searching for Flamenco dancers for the upcoming production of Don Quichotte.

Dietz was transfixed by Lopez’s performance, recognising on the pedestrian stage the work of an accomplished Flamenco dancer from the heart of Andaluçia in Spain, the home of Flamenco. And so a dream quickly became reality for Lopez – approached by Dietz, invited to audition for Opera Australia, and immediately accepted for the role as a Flamenco dancer in the current production of Don Quichotte, and currently performing each night in the Sydney Opera House.

On asking what elements of Lopez’s performance struck him, Dietz speaks of how “natural and real” her dancing was.

“It’s a very subtle thing to pick up,” Dietz tells Dance Informa. “I’ve been involved and watching Flamenco for many years. I teach Flamenco, and I have a very good eye for detail, so I see nuance quickly and easily, and that’s what I saw in Naima. She was dancing with another girl, but I was focused on Naima, because I saw the dance style, the movement style, and I knew immediately that she was from Spain. You can learn Flamenco anywhere on the planet and you can dance it extremely well, but there’s a flavour that comes from being in Spain all your life, and it’s something that children grow up with. They see it every day, and the nuances are absorbed and they come through when that person expresses dance themselves.“

When pressed about his own Flamenco journey, Dietz speaks about teaching himself Flamenco guitar before he and his sisters stumbled on a dance studio in Canberra.

“We heard this sound, and we thought, ‘What’s that?'” he recalls. “So we followed the sound upstairs to a studio, and there was this teacher with her student, and they were doing castanets with their arms, and all in black, and I’d never seen that before. My jaw dropped, and I thought, Whatever that is, that is me.'”

Dietz continues, “I had no idea what it was, but I knew I had to do that, so I signed up for classes. It wasn’t strictly Flamenco, it was Spanish dance, and I studied with this lady, Gunta Hamra, for a year before moving to Sydney, where I started learning Flamenco with a Flamenco teacher. After a few months of studying, I realised that I had discovered the dance form that accompanied the Flamenco guitar that I had been teaching myself. I didn’t know they were linked! Someone upstairs was saying, ‘This is you.'”

From that original infatuation, Dietz is now recognised as a Flamenco expert, the “go to” man for creating and advising on choreography and dance, such as his ongoing relationship with Opera Australia.

As for Lopez’s history with Flamenco, she grew up in Anadaluçia, the birthplace of this Spanish dance, and attended a dance conservatorium in Grenada.

“I was studying nursing at the university, on my last years, because I dance always,” she shares. “Then the last year of university, I thought, ‘No, I prefer a dance career because I like it more.’ Then I finished my nursing studies, and the same year, I started at the conservatorium when I was 21 or 22. Then I had two professions in Spain, nursing and Flamenco.”

When asked whether there is a repertoire of “steps” in Flamenco as there is with classical ballet, Dietz says, “Well, yes, there is a body of steps. In a formal academy, you may be required to learn all of them. In the home, you learn enough to express yourself, and then you learn more and more according to your desires. But certainly the more you learn, the more you can say.”

He adds, “Flamenco is assertive. There’s no such thing as shyness in Flamenco. There can be gentle, there can be soft, but it’s always assertive; you’re asserting your gentleness, asserting your softness, asserting everything about you. There’s no retreating, only going forward. Because in Flamenco, all these things that we use — our upper body, our feet — it’s like a language; they’re like the words of a language. You put them together according to the grammar of Flamenco, to say what you want.”

In the current production, Don Quichotte, Lopez is one of eight Flamenco dancers – four male and four female. And this, her first experience of opera, has been a very good experience. She describes the camaraderie of the performers in general and her fellow dancers. “It’s a very warm team. I like this because everybody looks after each other. Everyone is very, very friendly!”

Lopez knows only too well the story of Don Quichotte, having studied this Spanish classical piece of literature at school. “I know the story; it’s close to me,” she says. “It’s a big book!”

Performing as a dancer for the first time in the opera has held some challenges for Lopez, unfamiliar with working alongside singers. Initially, the eight dancers were practicing by themselves in the rehearsal room or on the stage. The first rehearsal with everyone on stage was a little complicated with a few hiccups. “I remember the first day with the singers there,” she recalls. “‘Hello, I need to go… I don’t know where….'” Thankfully, the Stage Director and Dietz see everything and make everything flow seamlessly.

And after this experience with Opera Australia, what are Lopez’s plans? She’s not sure, but she’ll look for a job, any kind of job, but is determined to do auditions and take advantage of any dance opportunities. Having only been in Sydney for seven months, it’s still in the early days, but she knows that this experience with the opera has helped her “grow up personally and artistically. I’m improving my dance, learning from this experience.”

Lopez is beaming, as is Dietz. They clearly love this moment and this experience of a dream come true, nicely linked to the dreams of Don Quichotte.

To quote Shakespeare, “All the world’s a stage”…even a shopping mall.