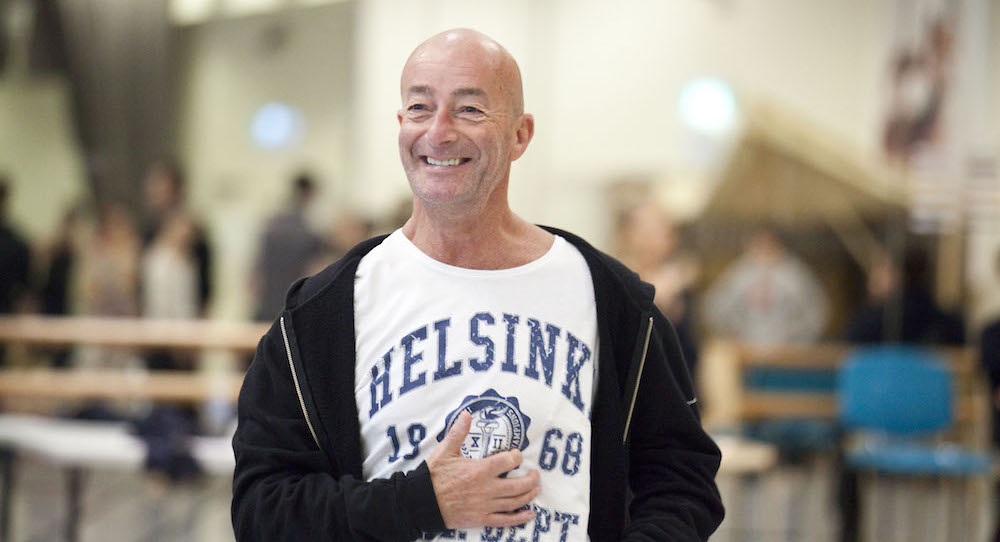 If you’ve followed contemporary dance or ballet in Australia at any stage since the 1970s, you will have heard of Graeme Murphy. Considered by many to be an Australian icon, Murphy was the artistic director of Sydney Dance Company for 31 years. But he is equally renowned for his work in the realm of classical ballet. To celebrate the 50th year since Murphy began his professional dance career, The Australian Ballet is celebrating all things Murphy with the opener to its 2018 season, titled, of all things, Murphy.

“When you’re a student, you’re full of wide eyed hope. I hoped to make it to soloist. I only made it to the rank of coryphée,” Murphy reveals. “But to have this happen? In my wildest dreams, and I had some wild dreams…never!”

He continues, “When David [McAllister] asked me, I was flattered and amazed. It doesn’t seem like 50 years. My life has flown joyously by. My connection with The Australian Ballet has always been there. Right from the Australian Ballet School days.”

From the ranks of The Australian Ballet coryphée, Murphy took his first steps as a choreographer with The Australian Ballet’s Choreographic Workshop in 1971. From there, he has gone on to create countless works with Sydney Dance Company, The Australian Ballet, and dozens of other companies of international note. The program for Murphy will feature the full version of his retelling of Michel Fokine’s Firebird, along with excerpts from The Silver Rose, Air and Other Invisible Forces, Ellipse, Grand, and the complete Shéhérazade.

Murphy initially created his version of Firebird in 2009. It was during a year-long celebration of legendary Ballets Russes, the company that staged and toured Fokine’s original Firebird.

“I love the Stravinsky score,” Murphy says of the decision to create his own version, and to include it in Murphy. “I saw the original, and I wanted to take it on a journey and see what I could do with it.”

At 45 minutes long, Firebird will fill most of the hour-long program for Murphy. As you can imagine, it was a tough choice to decide what other works to include.

“David [McAllister] gave me a choice of which works to choose for the 50 years,” Murphy explains. “I had an hour to fill, and had to choose from so many works. I could have made it 15 hours long. At one stage, we thought about selecting them chronologically. But when you try to put it all into an hour, it’s very hard. In the end, I thought about the dancers in The Australian Ballet and based the choices around their potential and that would challenge and inspire them. I didn’t want it to be an hour of snippets. I wanted there to be good hunks of works so the audience and dancers get a chance to be more involved in each work. They get to see a beautiful moment, and then their brain has to change gear for the next piece.”

He continues, “A lot of work I did in that period were full-length narrative works. But I needed to find a significant part of each one. Sometimes an individual character takes a journey, and I want to show a key point in that. Or sometimes it’s a couple of characters. But I also wanted to show large group pieces. And The Australian Ballet has so many dancers, so it’s possible to stage those group pieces. I also wanted variety, in the type of work but also the era of the work. The works we’ve selected are from the late ’70s into the 2000s. The next step is to take that original movement and put it on different bodies than the original ones. Sometimes a work is made on bodies that are very special. David, Janet [Vernon] and I sat down to work out the casting. I’ve worked with the company so much that I’m very aware of who is in the company. It’s a bit like choosing from a chocolate box. It will be fun. A couple of works are really monstrous and driving. But dancers do love a challenge. I find that they enjoy being pushed to work harder and higher.”

In his half century as a choreographer, Murphy has seen the expectations of both dancers and dance works skyrocket.

“People don’t realise dance is about evolution, choreographically and physically. Standards go through the roof with each generation. It’s not just physical. The level of artistry grows. Just to be in The Australian Ballet company, you need amazing strength, power and the ability to do incredible tricks. Then you have to add artistry on top of that. Amazing tricks catch the audience’s eye, but when the technique and artistry mix, then you have someone that will be a really big star.”

He has had his share of opportunity to work with those big stars, including Nureyev, Baryshnikov and Fonteyn. Closer to home, Murphy mentions Madeleine Eastoe from The Australian Ballet and, of course, his life partner and muse, Janet Vernon, as some of the few he’s worked with who had both technical talent and artistry.

“I was so lucky to find someone who was my muse as well as my life partner,” he says of Vernon. “You create movement for them that you have in your mind, and then see what they do with it. That is gold. I’ve been lucky to see such a broad spectrum of talent. It continues to amaze me. It’s like a spectrum of colour. I’ve been lucky to work with so many different people. Today’s dancers are a different breed. They specialise, but they know they have to be well rounded. Choreographers are so demanding. And both dancers and audiences need constant surprise and development.”

When speaking of why the classic ballets are still being performed and reinterpreted today, Murphy speaks of the importance of appreciating both the old and the new.

“It’s my job to make people aware that you can take a much loved classic and add to it, see it through different eyes,” Murphy says. “It’s about growth. Audiences are forced to change their opinion. I love finding a generation of audiences who aren’t biased. There are only two types of dance – good and bad. I stopped defining dance styles, and people and beauty, a long time ago.”

He likens the continued popularity of classic ballets to the longevity of the great composers. “You can’t just choose only to listen to Bach,” he says. “You have to listen to what came after it. But by listening to and understanding Bach, you learn something. And you can take that into what you create, or into how you appreciate something newer.”

Murphy is most certainly an artist who enjoys, and values, the element of bringing things together that are different. The old and new. The collaboration between choreographer and dancer, and between different types of artists and creatives.

“I love the collaborative element of dance,” Murphy says. “You commission the score, work with designers, nurture the performers and communicate with the audience. I feel sorry for artists who have to create alone, like novelists. One of the greatest privileges of being a choreographer is taking someone who is not known. You see a spark, or find something in them. You nurture it and release it. And then it is appreciated by others. And then that artist starts to flower. You’ve helped free that strange, eccentric spirit inside them that is screaming to be free. That’s been the highlight of my career. If you are a dictator as a choreographer, it stops that person having that experience. It’s all about the process. The interaction between the choreographer and dancer is when the magic happens.”

“I knew my life journey wouldn’t take me out of the magic world of dance,” he recalls. “At the age of five, I knew that’s where I wanted my life to be. I nagged my parents really early. It must have been strange to them to think of me wanting a life in the world of ballet. At that time, The Australian Ballet company didn’t exist, so dance was something that happened in Europe and America. Of course, I wanted to be the magical prince. Then I realised I would never be the prince, but I discovered I had other things that other dancers didn’t. In early days at Sydney Dance Company, I’d choreograph on myself. I found truth in myself and found my voice. That then freed me to help others to find their voice.”

Artists of The Australian Ballet in ‘The Silver Rose’. Photo by Wendell Teodoro.

Murphy continues, “I didn’t think about it. It was an unfiltered, joyous thing. Children dance to music without thinking about it. I just never grew out of it. I don’t hear music; I see it as movement. I wasn’t told to stop doing it. My parents must have thought I was a strange creature from another planet. But I was very lucky. I left school at 14 to dance. My parents were teachers, and it was amazing that they allowed me to escape the education system and be an artist. They saw my glowing eyes and scrimped and saved so that I could do that.”

We all know that Murphy creates wonderful, imaginative, compelling dance works, but the way he speaks about his work and his life reveals a person whose creativity is not limited to dance. His words create an imagery all of their own. When asked what he’ll do next, Murphy’s aim is simple.

“I want to paint and write and be a human poem. The essence of life is poetry.”

The Murphy program will light up the stage in Melbourne at Arts Centre Melbourne from 16 to 26 March 2018, and in Sydney at Sydney Opera House from 6 to 23 April 2018. Tickets are available from www.australianballet.com.au.