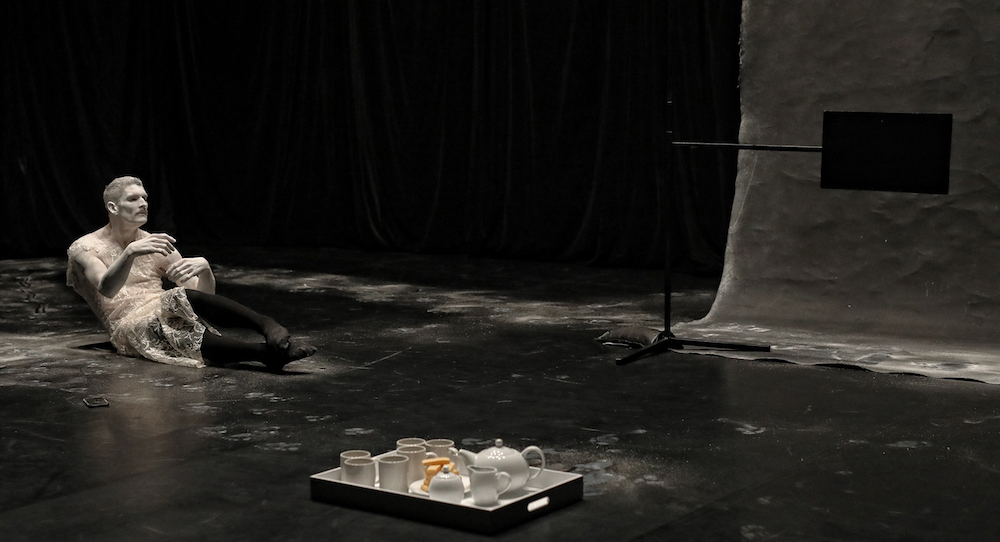 Making its Australian premiere as part of Sydney Festival’s About an Hour series, BEAST by Dan Daw Creative Projects is a work that leaves you with more provocations than resolutions.

It sits in a limbo between dance/theatre/performance art, clothed and naked, being seen or unseen, normal or not. 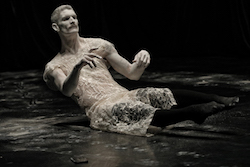 In “Behind the Beast – A conversation with Dan Daw”, also part of the festival, Daw responds to the public gaze toward him as feeling like an “animal who has just escaped from the zoo”. The Australian disabled performing artist allows the BEAST audience to examine their own expectations of his body when it is presented theatrically, physically, alone, naked.

As the audience enters, they see a perfectly chiselled torso partly hidden and floating behind a screen. It is immediately identifiable as a mannequin with its level of perfection. It is revealed that it is Daw’s torso – and if it wasn’t, it was an exact, perfect match. Immediately, the audience is poised to question their own examination of what is beautiful, normal and perfect.

This examination continues as Daw’s chiselled, athletic torso is placed under a spotlight and intricately moves to a pulsating, club-like soundtrack. His face is partially hidden and with darkness from the waist down, every movement of his arms and torso is precise and highlighted. I was entranced watching his ribcage expand and become structural like an opening umbrella.

Beastily, animally crawling to the front, he waits on all fours, and the first time we see Daw’s face, it becomes human. His structural, high cheekbone, strong jawed face is again mannequin model, but this time is personal.

In knee high black socks, he serves tea in a scene that reads as being subservient and sexual. All the time being contrasted to his powdered white torso, which is marble Adonis-like sculptural. The work is choreographed by Martin Forsberg, and Daw’s physicality is proven in a scene where he sits on the ground with his legs, straightened and off the floor, for the entirety of a track of music. 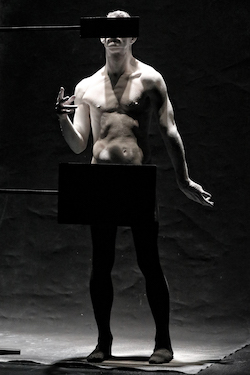 The lighting, by Guy Hoare, is at times dark. At first, I felt too dark in parts; however, I loved how this continued to allow the play between what is seen and unseen by the audience, and for me to question why I wanted to see more. Why did I want more audience accommodating lighting to examine his body and movements? Did I want exhibition-esque lighting similar to the animal enclosures at the zoo? Or perhaps more fixed lighting like on a sculpture in a gallery?

Daw hands over a torch activated mobile phone to an audience member, and it lights the final scene. As Daw moves to his final position, the shadow he casts is that of a beast. The faceless shadow does not look human; it looks like it could belong to Gollum or a man halfway to transitioning to a werewolf. But in front of the shadow is Daw, and we see the two together alone on the stage. It is this duality which sits at the centre of this work. The beast versus the human coexisting within the same body, inescapable from each other.

I reflect how “good” Smeagol existed with his “bad” Gollum who seemed beyond his control, and how Remus Lupin was man by day but beast by full moon night. These characters’ beasts are beyond their control and living within them like Daw’s. In BEAST, however, it is us, the audience, wielding the torch lit phone casting the shadow and controlling and maintaining the viewership of the duality we cast upon him. It is “us” the viewer who feeds this beast, perpetuating it and allowing it to exist. It ends with Daw reclaiming the controlled, torch-lit-shadow-casting phone for himself.

BEAST is an intelligent work by an important, unafraid artist. The themes in BEAST transcend the theatre. It is provoking and leaves you feeling unresolved. Not because of the work but because of your own expectations and ideologies of what is “normal” and the responsibility this carries; the shadows you are in control of casting.