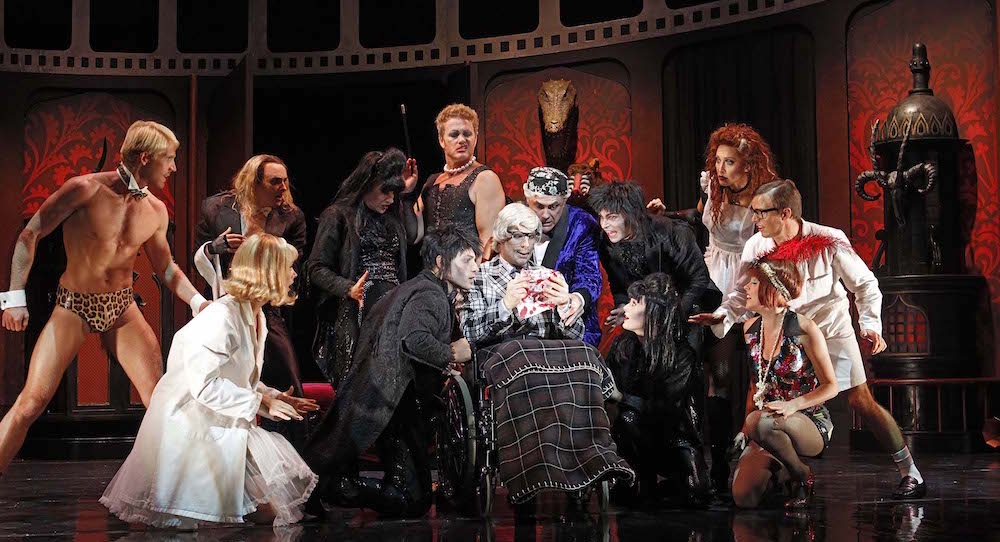 Juggling choreography for three professional productions is not an easy task, especially when they are staged at the same time on two different sides of the world! Having choreographed the UK production of Crazy for You, Nathan M. Wright has returned to Australia to choreograph his seventh production of The Rocky Horror Show, and on a larger scale, he is choregraphing the upcoming 2018 Opening Ceremonies of The Commonwealth Games.

For Wright, a career as a choreographer was a natural progression from performing in musicals. He worked his way up the ranks to be Dance Captain, Assistant and then Associate Choreographer. He knew early on that he wanted to be on the creative side choreographing and staging productions, so he proactively chased his dreams. Wright recalls, “I wrote to three choreographers whom I really admired, John O’Connell, Ross Coleman and Andrew Hallsworth, and said this is what I’d love to do, and they all wrote back offering me advice.”

With a self-proclaimed eclectic choreographic style, Wright enjoys a challenge and relished the opportunity to choreograph dancers on roller skates in the musical Xanadu staged in the UK and Australia. A closeted roller skater himself, working on this production turned out to be one of the most joyous jobs he’s done. It isn’t, however, the dance style that draws him to a specific project. “I’m always drawn to the story of the show,” he explains. “It’s the script and music that entices me to want to choreograph.”

So it’s no surprise that he’s excited to return to Australia to choreograph and stage The Rocky Horror Show after working on the West End production, two UK tours and three Australian productions in a matter of four years. During the process of working on this show in two different countries, he says he learnt that he needed to adapt his choreography for two very different audiences. “In the UK, you really have to pay homage to certain elements of a show because 99 percent of the audience come dressed up as every character. I very much try to hold on to certain nuances like the Time Warp because they stand up every show and do it and they have a script they call out. In Australia, the audiences just love it, but they’re not as vocal and might not stand up, so it allows me to be a bit more theatrical in terms of staging and ideas.”

So how does he keep track of his choreography? “Touch wood it’s still in my head,” Wright jokes. “I don’t write things down, and I still teach every single step. I also have very good Associates. When I do Rocky Horror, I’m working with one of my best friends and collaborator, Leah Howard. She has done every production with me and knows the show as well as I do.”

When it comes to choreographic inspiration, Wright reveals that it comes from a most unlikely source. He’s inspired to choregraph when he’s vacuuming! “I was given advice a very long time ago that when you really try to focus on what you’re going to do, it’s actually really hard. So what I do is put it out into the universe, and I vacuum. I’m my most creative when I’m not thinking about what I’m doing. People have even brought vacuums to set, as they think it’s quite hilarious, but when I’m cleaning is when my ideas come.”

Regardless of whether Wright is working on smaller productions at the Hayes Theatre Sydney or larger stadium-size productions, his creative approach to choreography remains the same. “I treat every show as if it’s the biggest show on earth,” he says. “When I know a show is coming up, I put away a few weeks and just listen to the music, I write down ideas and think. I create the story and then I colour it in, and I use the cast as my colouring in pencils. I’m extremely collaborative in my work.”

Having this collaborative approach means that Wright looks beyond talent when casting a show. “The most important thing I look for is what people are like off stage,” he shares. “What they’re like to work with and how they operate behind the scenes, as well as on stage.”

So what is Wright’s key to success when working on multiple productions? “Very good management! I would never juggle if I didn’t feel I could give it my all.” He also gives credit to his teams and says, “The Commonwealth Games is a mass large-scale production, and obviously I work with incredible people and multitudes of teams who bring the ceremony to life, so I feel like I’m well supported.”

For Wright, the ultimate part of the job happens at the end of the process, when a show he has choreographed finally opens to a live audience. “Seeing your work being executed. There is nothing more thrilling!”

The Rocky Horror Show is on tour now and will visit Adelaide, Brisbane, Perth and Melbourne. For tickets, visit rockyhorror.com.au.