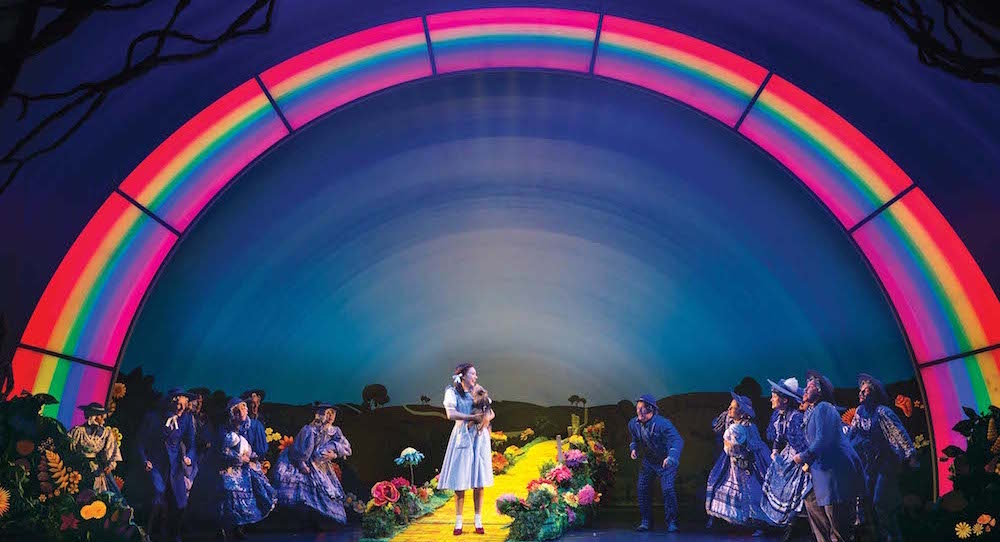 With a passion for musical theatre and a dedication to her craft, Samantha Leigh Dodemaide is a testament that dreams do come true as she steps into Dorothy’s sparkling ruby slippers in the new stage adaption of the iconic and much-loved MGM movie musical, The Wizard of Oz. With an engaging storyline and award-winning songs including “Over the Rainbow”, which shot Judy Garland to stardom, this new production is set to do the same for this bright star.

While this marks Dodemaide’s first leading role in a major musical, she is no stranger to the professional stage. With roles in Anything Goes, Singin’ in the Rain, Sweet Charity, A Chorus Line and King Kong, she is also the recipient of the prestigious ANZ Trustees Rob Guest Endowment Award.

The lovely Dodemaide recently chatted to Dance Informa, sharing her journey and wonderful experience as the leading lady in The Wizard of Oz.

How did you feel when you found out you that you had won the role of Dorothy? How important was that moment for you?

“It was very overwhelming! I had been working toward that moment my whole life. Being chosen to be a lead in a professional musical is thrilling because you get to tell the story of the show, and that’s what is most important to me. As corny as it sounds, it was a dream come true and it was a very special day.”

Tell us about your character Dorothy and what you enjoy most about playing this role?

“I adore this role. Well, first of all, I’m swiping 12 years off my age. I’m 28, and she’s 16, so I’m chuffed about that! I love her youthfulness and that I get to tap into my inner child, and I love how courageous, strong and compassionate she is. The character was so far beyond her years, even though it was written in 1900 and the film in 1939. She was a strong determined young woman, and we didn’t see a lot of that back then, so it’s very relatable to a modern audience.”

Do you feel any pressure to live up to Judy Garland’s performance in the movie musical, and what did you take from her performance that you’ve brought to yours?

“Well absolutely. They are huge shoes to fill, and it’s quite a daunting experience because everyone does idolise her performance. I went back to the original book written by L. Frank Baum in 1900, and took a lot of my Dorothy from that. I think no one can be Judy Garland, and I certainly can’t. I can only bring myself to Dorothy, and the way this production is written and created it does leave a lot of room for interpretation, so hopefully audiences come without the expectation of seeing Judy’s performance and are interested in seeing a fresh version of the role.”

Samantha Leigh Dodemaide and Trouble in ‘The Wizard of Oz’. Photo by Jeff Busby.

You get to work with a dog on stage, Toto! Have you had any funny moments?

“It’s the best part of the job, and it’s also the most challenging. Trouble, who plays Toto, and his understudy Flick, are both Aussie Terriers, and they are two of the cleverest dogs. Trouble is just a dream on stage. He’s quite the upstager, and I can hear the audiences’ reactions quite well, especially when singing ‘Somewhere Over the Rainbow’. It’s just him and I on stage, and there are a few moments when he’s behind me, and I can tell by the audiences’ reactions that he’s doing something that is stealing their attention, but if anyone’s going to upstage me, then I’m more than happy for him. He spends most of the show with me, and we spend the whole show on stage. It’s a challenge, as not only do I have to think about myself, but I have to think about him and whether he’s okay and how he’s going. It’s a very physical show for the both of us, and he’s dealing with it probably better than I, which is wonderful.”

This production of The Wizard of Oz has been developed by Andrew Lloyd Webber and Tim Rice. What can audiences expect from the show?

“There are five new incredible songs. People will be leaving the show not only singing the classics but also humming along to the new ones. Dorothy gets a new song at the beginning of the show that emphasizes her emotion, which is called ‘Nobody Understands Me’. Along with the new songs, the updated version is just a visual spectacular! It’s like the most delicious dessert you can ever imagine on stage. There are special effects, we have pyrotechnics, there is a lot of projection which takes the audience into a whole new different world, so I think people are going to be surprised. This isn’t just the old Wizard of Oz; it’s new and revamped and it pays tribute the original, so if you love the movie, you will love this and you’re getting a whole lot more.”

Do you have a routine that you follow on a show day to ensure you are performance ready?

“I do, and it changes for every show, but for this one, for instance, I get to the theatre two hours before the show, I get to my dressing room and start with my hair and makeup, and while I’m doing that, I’ll listen to songs. I love listening to music that is inspiring but will relax me. Frank Sinatra, Bobby Darren, Aretha Franklin, Billy Holiday are on my playlist now. Then I’ll do my vocal warm-up, and the whole cast will meet on stage and do a physical and vocal warm-up together, which is a great opportunity to clock in with everyone and say hello because you never want the first time you see someone to be on stage for the day. Then I’ll go back to my dressing room and get my wig on and get dressed. We’re all pre-set five minutes before the show starts, and go and do our mic check before that.”

There are so many signature songs in the musical, including ‘Ding, Dong the Witch is Dead’, ‘Follow the Yellow Brick Road’, ‘If I Only Had a Brain’ and ‘Somewhere Over the Rainbow’ to name a few. What is your favourite song that you get to sing?

“It would have to be ‘Somewhere Over the Rainbow’. It’s such a beautiful song, and in this production it has so much meaning. There’s a story throughout the song, and it’s the beginning of Dorothy’s arc of her journey, so it’s a pivotal point in the piece. It’s when she decides she is going to run away. I think it wouldn’t be The Wizard of Oz without it.”

You’ve transitioned from being in the ensemble of many musical theatre shows and understudying lead roles to now being the lead. What have you learned from those experiences that help you now in your first lead role?

“I think it’s very important to go through those steps and learn the ropes from the start to the end, and being in an ensemble is extremely hard work. Our ensembles work harder than anyone, and they sometimes don’t get the reward that the leads out the front get, so the respect I have for the people in my show who hold it together is enormous. I’ve also understudied quite a lot, so that has been a great preparation and learning experience for me stepping into this role. I learnt from some of our industry’s finest, understudying people like Caroline O’Conner, Verity Hunt Ballard, Debora Krizak and Gretel Scarlett. Those leading ladies were just spectacular role models, and I couldn’t have asked for anything better. I think there’s something so wonderful about understudying, as it’s a great opportunity to learn. It’s like a free masterclass in performing, and for me, you get to rehearse and hopefully play great roles without the pressure, so that was really wonderful.”

Jemma Rix and Samantha Leigh Dodemaide in ‘The Wizard of Oz’. Photo by Jeff Busby.

What has it been like for you working alongside seasoned performers such as Anthony Warlow, Lucy Durack and Jemma Rix? What advice have they given you?

“They are three of the nicest people you could work with in showbiz. Not only are they the nicest, caring, supportive people, but they are so talented and on stage, I learn more and more from them every single performance. I’ve admired the three of them from afar for quite a while, and I have to pinch myself to realise that I’m on stage with them now and not only are they my co-stars but they’re my friends as well. They’ve given me some great advice, and all three of them have been in the industry for a long time and I’m full of questions every day, and they always have their doors open. I call Jemma and Lucy my show mums because they’re so giving with their time, encouragement and support.”

What has been the key to your successful career in musical theatre?

“I think it’s the love of what I do. If you really love something and are passionate about it, go for it and it will happen. I’m by far not the most talented person I’ve ever met. There are a lot of people out there with a great skill set, and I don’t think mine is the best, but I really love what I do and I’m really passionate, and when I’m on stage, it inspires me. The key to my success is just loving it and being so appreciative of being a part of this industry and, most importantly, constantly wanting to improve. I think I’ll be trying to better myself until the day I retire, and I’ve got a long way to go still.”

The Wizard of Oz is now on at the Lyric Theatre QPAC Brisbane and the Capitol Theatre Sydney from 30 December 2017. For more information and to purchase tickets, visit www.wizardofozthemusical.com.