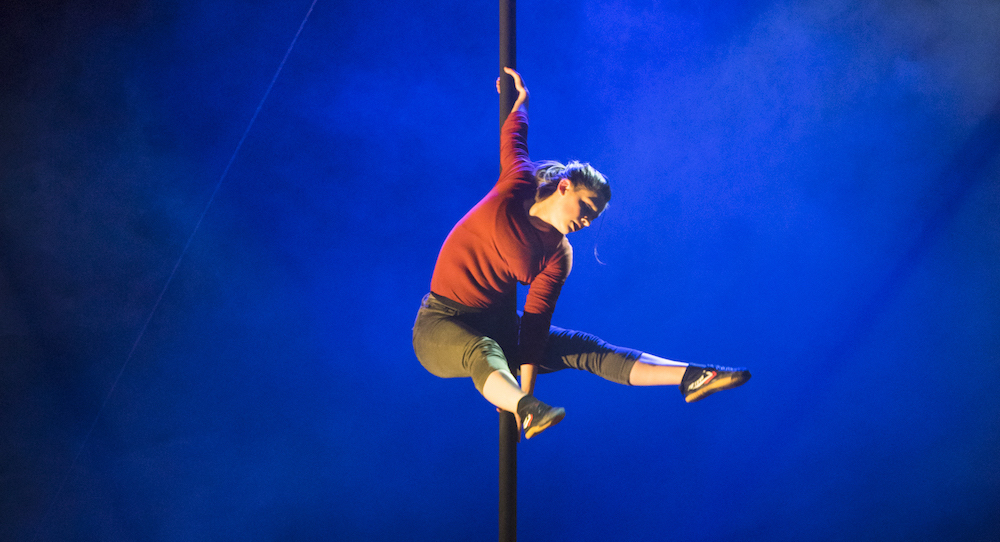 ­If there’s anything we can safely ascertain from Kate Champion’s CV, it’s that she does not like to be restricted to artform or genre; and so, given this, it should not surprise us to learn that she is now working in the circus.

The founder and former artistic director of Sydney-based phenomenon Force Majeure has already directed a play and worked on an opera since stepping aside from the company in 2015, so her current excursion into the very particular world of circus is simply an extension of her lifelong passion for cross discipline physical theatre. Indeed, her role as director of Please Hold, the final year performance for the latest batch of National Institute of Circus Arts (NICA) grads, takes Champion back to her roots.

“My brother was ‘an almost founding member’ of Circus Oz,” she explains, recalling how she was in a show with him in 1983 at the Seymour Centre in Sydney. “I did a trapeze act with him in that.”

Aside from filial connection and past glories, her attraction to circus pivots on the creative challenge of expanding its scope from mere spectacle. “I’ve always found it fascinating but really tricky how you can take circus skills, which refine themselves to being about the skill or the trick, and give them metaphor or meaning,” she says. “It’s about getting inside those skills but still letting them be what they are.”

With Please Hold, she is working with an ensemble of 21 final year students on a piece that seeks to tease apart notions as diverse as social expectation and the particularities of the circus artist’s trade. As she reveals, “What I’m trying to do is to dig inside their skills and almost be the naïve questioner, like the audience. You know, how long does it take to perfect a handstand, and what do people think about that in the outside world when they realise that you’ve just spent three years trying to perfect that handstand?”

Wrapped around all that is our cultural view of the circus — its image as a bohemian and extraordinary pursuit, an exotic world of death defying virtuosity and eccentric characters. “Of all the artforms,” Champion argues, “it has the reputation of being more extreme and, therefore, attracting more extreme personalities, or people who don’t want to tread the normal path. That curiosity is driving me in querying what they do and how we can make the show.”

Given NICA’s reputation for turning out high quality performers, it is no surprise that Please Hold boasts a cast already on their way to successful careers, including Victorian Apprentice of the Year Jessie McKibbin and Nelson Smyles, who has just been given a contract with Cirque du Soleil. However, the group’s highly refined skill sets and promising outlooks are not putting blocks in the way of Champion’s creative process.

“The students are very open to see their skills from another angle,” Champion says. “They’re not resistant in any way.”

What’s more, they are keen to take on board their celebrity director’s “outsider” perspective. “Is it tedious to learn to juggle?” she wonders. “Or is it Zen? Is there another plane that I can’t perceive?”

Although keen not to give away too many of the show’s secrets, Champion does share a little detail. “One of the performers told me a great story of how you can walk into training room, and you’ll see people with their phone on speaker whilst they’re practising their handstand because they’re on hold to Centrelink while they’re checking on their student payments or whatever.”

In addition, there is also the word itself: hold. “There’s the idea that you hold your breath when you go the circus,” Champion elaborates. “Are they going to make it or not? Will they fall? And you know, there’s also ‘please hold your opinion before you see it’ or holding your nerve during a routine and all that.”

Amidst all this, though, the “real” world intervenes. As Champion notes, the students are well aware that the cosy certainties of life inside a school are about to end and the wider unknowns of the outside world are about to kick in. “In the real world, the rules aren’t as concrete. Whereas within an institute, if you do that skill really well and you study hard, then you will succeed; but the real world doesn’t really work like that. I’m quite fascinated with the cusp these students find themselves on now. You know, where will all these skills end up?”

Quite apart from the focus of a graduating performance season, it’s the salient question for the 21 stars of Please Hold. In fact, it’s the kind of question that a “multi-form” artist like Champion is probably asking herself; and the answer, knowing her, could be almost anything.