Each performer’s work will have an entirely individual approach; however, the common thread between the pieces is the anomalies of each artist – the fusing of things rarely seen together, to create something unique and personal for each. The works are cross-cultural, personal endeavours that capture a unique snapshot of a world of diverse and interconnected people, multiethnic and globalised. 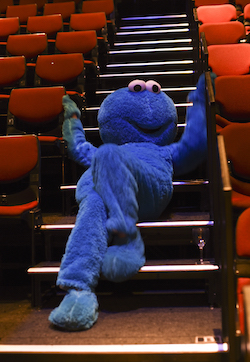 Approaching Gone (#ytfingers) by Bhenji Ra opened the programme, and for me was the least successful of the three works, although the school’s audience I attended with quite enjoyed it. It purported to explore the feminine body in popular culture and modern dance. It began outside in the courtyard of Riverside with Ra dressed as Cookie Monster. Why? An analogy to the way women are always being pressured by body image? This piece purported to explore the consumption of cultural practice and examine the possibilities of resistance against the commodification of the “cultural” body/identity.

Ra’s choreography is a fluid combination of breakdance and hip hop, with stylized movements repeated, as are crouching and kneeling walk movements. Eventually, she moves inside and interacts with the audience, leading us into the theatre, where there are whirling projections on a screen. The choreography is repeated. Slowly, eventually, the head is removed and there is more interaction with the nervously giggling school’s audience. At one point, Ra vanishes up the back to the right hand corner and does a darkly hidden solo of whirling arms. Eventually, she slithers out of the Cookie Monster costume, and there is much use of repetition when she demands, “Now that I’ve got you I my space, can I ask you a question?” and other short, sharp sentences.

There was lots of slithering, rolling, sultry floorwork here, Ra half undressed with skin-coloured support underwear. Ra also encouraged the use of mobiles and photos. Repetition of words again with “hashtag…yes, queen, hashtag…slippery fish”.

Then there was a lot of repetition of “Can you catch me?” (with different inflections), and also as the light dimmed – “Can you see me?”, as well as “It’s a metaphor” and so on as the light slowly darkened. Then, suddenly, a loud, explosive-like noise, and Ra reappeared as a pink, slimy fish-like/reptilian scary alien. Blackout. Is the work about how the female body is viewed today? You decide. 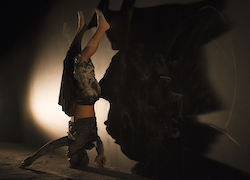 Imanuel Dado’s ‘What We Don’t See’. Photo by Heidrun Lohr.

The most successful work was the stark, dramatically passionate piece created and performed by Imanuel Dado entitled What We Don’t See. Dado was in black martial arts/theatrical black wear, easy to move in, and perhaps there were touches of Butoh. Dado’s work is about life decisions and second-guessing, including artistic choices, career pathways and personal relationships.

What We Don’t See opens and closes with just a small circle of light, as if Dado is trapped in it. His choreography is intense, sculptural and fluid. For a lot of the piece, his body is tilted slightly off-balance, just barely in control, vertically trying to escape. The work demands a very flexible back, rippling arms and rolling floorwork. At times, there is a repeated motif of fluttering hands at the heart. Sometimes Dado elegantly slithers and slides. The moves are reminiscent of breakdancing (and at one point, a headstand is included). The walls are black with white flour on the floor; Dado becomes covered in this. He “draws” on the walls with white handprints and hurtles and throws himself against the black wall, creating an imprint. It is a mesmerizing, intense performance.

After interval came Ġbejniet by Carl Sciberras, which combines dance and food in an ode to his grandmother’s soup recipe. Like Sciberras, the soup has origins in Italy, Malta and Australia, and is used as a metaphor to explore mixed race heritage. Ġbejniet examines Sciberras’ own struggles with identity, and questions whether using dance forms from Malta and Italy, where his grandparents migrated from, is a form of cultural appropriation. Sciberras cooks the soup and dance (his)tory in-between. Mmm, it smells delicious. There is a small portable stove on a bench, covered by red and white checked tablecloth, and barefoot Sciberras wears a matching red and white checked shirt and dark soft trousers. Projections are used to tell the story of his grandparents’ voyage to Australia, and there are illustrations of the building of the Sydney Harbour Bridge. The dancing is a blend of contemporary and folk and has a romantic atmosphere – a lot of the time it is as if Sciberras is dancing with an imaginary partner.

At one point, Sciberras creates a circle of large wooden spoons placed in a large plastic circle like a chandelier. Then, there is the celebratory, at times quite formal, dancing when he uses 10 red and white balloons in pairs on quite long strings – a very courtly bow as he adjust the height. Then, the strings are entwined, and more dancing. Sciberras’ performance is fluid and princely, rippling and sculptural.

Throughout the work, he has been busily also chopping vegetables, and checking and stirring assorted ingredients. (At times, one gets worried it might boil over, but of course it doesn’t). The work ends with him tasting the soup.