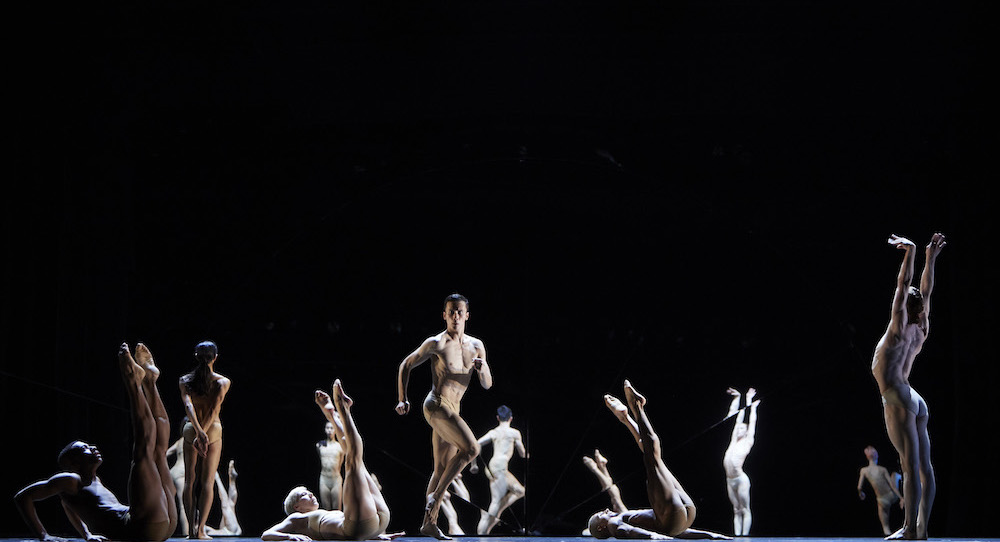 So much of Tree Of Codes is about surface. Canvas, page, screen – the reflection/refraction that happens when we transcribe the human experience and mediate it through the filter of form. Indeed, this visually and sonically hypnotic work is a kind of paean to the idea of form and fluidity, to the notion that the fixed is in permanent flow and that the process of change is liable to run in loops. Ancient firesides, 21st century theatres; it’s all the same when you know the code.

Taking its inspiration from a 1928 novella and a 2010 artwork, Tree Of Codes toys continuously with language and representation, utilising mirror, “frame in frame” and architectural motifs at almost every turn. In doing so, it consciously smudges out the silo distinctions between the primitive and the modern, the individual and the herd, the performative and the technical. The resulting fusion is compelling, gorgeous and, at times, nearly transcendent.

Of course, bringing together UK ballet legend Wayne McGregor, the visual artist Olafur Eliasson and the genius of Jamie xx was always going to deliver an intoxicating blend of bombast and restraint. Whilst the work does rely to some extent on overwhelming spectacle, it manages to remain for the most part on that tantalising line where exuberance and discipline, euphoria and melancholy, alchemically mix to make a kind of gold.

The cleverness and virtuosity of the work, however, doesn’t entirely obscure the shortcomings. For all his award-winning renown, McGregor’s choreography is rarely dazzling or indeed ground shifting. At times, there were distinct echoes of William Forsythe’s Frankfurt Ballet era and, at others, a reliance on the kind of “moves” many of us have been observing for quite a few years now. In fact, to be honest, the dance is the weakest link in Tree Of Codes, despite a number of individually brilliant moments.

Where this piece really excels is in its staging and sound. The lighting design is flat out brilliant, with some of the most subtle and beautiful segues you are likely to see in a theatre. The use of screens and mirrors to create both depth and disorientation is masterful. As for the score, well, the Jamie xx oeuvre of minimalist electronica is here in its full high art glory. Sad, ethereal, ecstatic and primal, it elevates Eliasson’s visuals to the level of sheer beauty.

Despite its frequently hard sheen and futurist de-individuation, Tree Of Codes still manages to be emotional enough to hold you; so that rather than simply being an exercise in brutalist geometry and digital trickery, it is a reflection on the reflex of speaking, on the universal human need to make connection with the other. This instinct for language is expressed in a sensory space, in the shape and flex of bodies and the dancing of light, and in the urgent thread of sound. Thus, for all of the conceptual backdrop and intellectual satisfaction, here the code is written in blood and bone. Time and place.

Without doubt, Tree Of Codes is a lavish experience, bringing both raw power and light touch to the table. Despite sometimes being too abstract for its own good and the dance occasionally drifting into passionless and programmatic territory, it seers itself into your senses with its bravado, exquisite artistry and irresistible momentum.