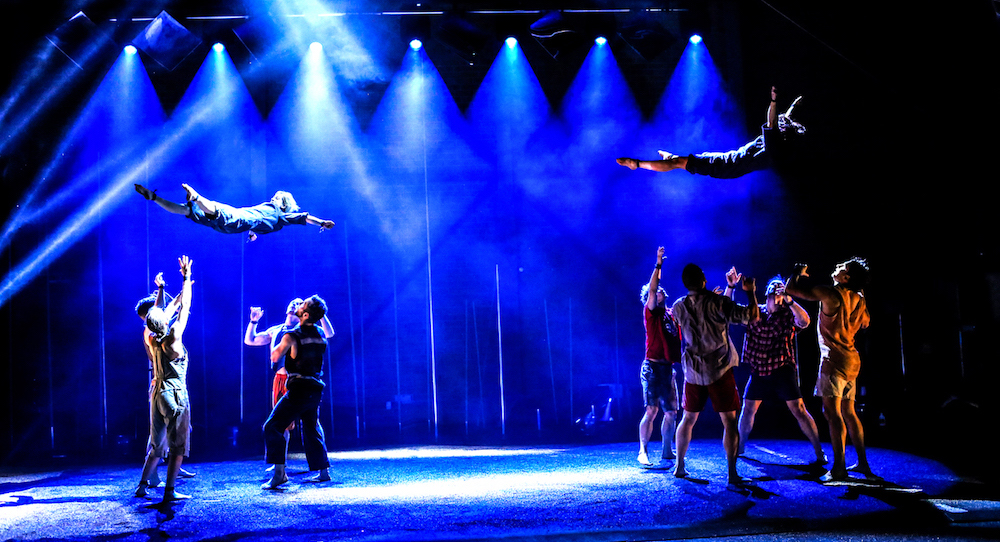 Gravity and Other Myths is a highly lauded, acrobatic ensemble based in Adelaide. The company’s previous show, A Simple Space, nominated for three Helpmann Awards, has been touring since 2014, with projected tours booked until at least 2020. The troupe eschews the polished aesthetics of circus such as Cirque de Soleil, preferring instead a DIY aesthetic.

Gravity and Other Myths’ ‘Backbone’. Photo by Sarah Walker.

Against expectation, Gravity and Other Myths’ latest show, Backbone, presented at the Melbourne Festival, opens and the curtain raises in silence and stillness. On stage, everything to be used is laid out, including the performers, all their tools and costumes. It is an inventory of the show. The ensemble economically and playfully assemble the set as their first action.

Backbone is about strength, playing perhaps with “spineless” as a euphemism for lacking strength. The work proceeds through acts of extreme strength and agility and precision, to displays, competitions and task-based actions that test strength. Each ensemble member competes against him/herself and each other to test the limits of his/her strength. In each scene, a performer engages in an act of sustained physical endurance; a performer sustains a handstand across the entire scene, a performer remains with one arm out for a scene.

There is a Dadaist aesthetic in the work, strange juxtapositions make for effective theatrical form. A suit of armour makes several appearances in different tasks. Some tasks display the armour as a positive – you cannot be damaged. Others represent the armour as a limitation: the dramaturgy of the piece requires a performer to perform a dance requiring flexibility and agility, and in the armour, this becomes comical.

Gravity and Other Myths’ ‘Backbone’. Photo by Carnival Cinema.

The music by Elliot Zoerner and Shenton Gregory builds and releases the energy the cast create, providing a perfect provocation and support for the performers. The stark and industrial design by Geoff Cobham is a useful complement to the content of Backbone.

The final scene in the performance is not a spectacle of high flying acrobatics but a simple act of endurance. The ensemble stand to see who can sustain holding a large stone in front of them for the longest. When they each fail, they must put the stone down and leave the stage. It is this playful, yet simple dramaturgy which marks this performance. The performance does not obscure the work and collaboration that is required to create extreme acrobatic circus; instead, the performance celebrates and displays the means of its illusions. Consequently, it celebrates both the strength and vulnerability of the human form.