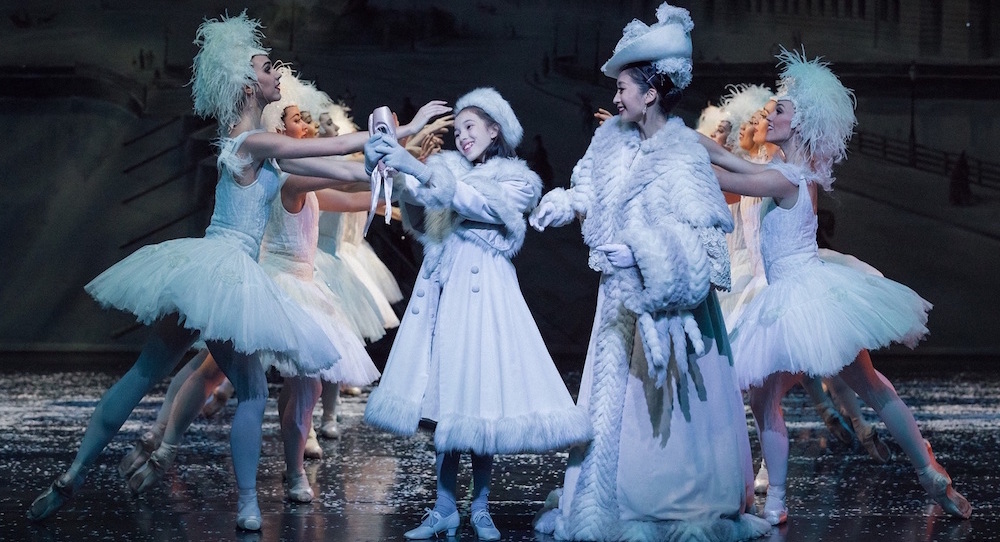 This glorious revival of Graeme Murphy’s Nutcracker: The Story of Clara by The Australian Ballet enchants and delights.

Now regarded as a classic (hard to believe it is now 25 years since its first production!), it is full of references to the “traditional” Petipa version of 1892, while also celebrating the history of ballet in Australia, with references to the Ballets Russes tours and the Borovansky Ballet, and providing inspirational observations on the life of a dancer.

In Murphy’s version, we are transported to Melbourne on a boiling hot Christmas Eve in the late 1950s. Clara, now rather fragile and elderly, is shown as a Russian-born former prima ballerina. We first see her struggling home with shopping while children play, tossing a football or skipping while the whirr of cicadas noisily continues, and we can see a Hill’s Hoist. A bevy of her friends, all Russian émigrés, unexpectedly gather at her home for the holiday celebrations, and her doctor as a surprise screens some old black and white footage of them performing in their prime, which inspires them to more exuberant (if somewhat creaky) dancing. Another continuing visual reference is the use of the Matryoshka doll. Overcome with exhaustion, Clara eventually falls into bed with the concerned Doctor looking after her, and dreams of giant Bolshevik rats and the death of her young soldier lover (aka “Beloved Officer”).

Clara then dreams of dancing once more with her beloved officer, and there is a delightful picnic scene with a dazzling showy pas de deux — but there are still hints of the menace and darkness to come with hungry peasants. Clara relives her life: her training as a child at the Imperial Conservatoire in St Petersburg, (wonderful Degas-like visuals, a delightful sequence for the children and most effective use of mirrors for the appearance of the grown Clara the Ballerina), her receiving a medal for her dancing, her triumphant appearance at the Marinsky Theatre performing for the Tsar and Tsarina, the shocking death of her officer lover during the Russian Revolution, her career touring the world with the Ballets Russes, her arrival in Australia, and then her final performance there with the Borovansky Ballet (the forerunner to The Australian Ballet). As her dreams blur, Clara descends into her final sleep.

As in some musicals, Murphy has three dancers to play Clara at the different stages of her life — as an elderly woman, a prima ballerina and a young girl — which makes for some beautiful magical effects as they join together/swap places .

Kristian Fredrikson’s masterful set and costume designs bring to life both Clara’s rather reduced working class existence in 1950s Melbourne and the sumptuous pre-Revolutionary world of St Petersburg society, while montages of black and white footage (Philippe Charluet, Film Collage and actual archival footage) depict the Russian Revolution, World War II and the Ballets Russes tours. Clara’s home in the opening scene includes a shrine to her lost love, with photos on the walls of her upstairs bedroom. Downstairs, a Bakelite radio is in the kitchen and a sofa has doilies as an extra fancy cover.

The opening émigré scenes are full of warmth and subtle humour. Are there perhaps allusions to the mad scene of Giselle, when Clara doesn’t recognise her friends? The second act  “national dances” series of divertissements – here shown as visits to Spain, Egypt and China as the Ballets Russes tours the world by luxurious ocean liner – seem to sit a little awkwardly in the narrative, although they are a perfectly reasonable solution. (The raggedy Spanish gypsies were a bit disappointing, though, quite lacklustre. The Turkish [Egyptian] section was a sinuous, slinky line of slaves pulling the ship, and the Chinese segment is a breathtaking vision of a stage full of people doing Tai Chi while Clara is wheeled through in a rickshaw.) The Sugar Plum Fairy music, with tinkling celesta here, is where we see Clara rebuffing the advances of three wealthy ballet patrons while keeping the jewels they tempt her with (shades of “Prima Donna” from Phantom of the Opera perhaps?).

Ai-Gul Gaisina, herself Russian–born and who joined The Australian Ballet in 1973 as the eldest Clara was poignant and charismatic. As Clara the Ballerina, Dimity Azoury was astonishing. With creamy épaulement, she had breathtaking control in the adagio with wonderfully long, slow unfolding of the leg in développé, and handled the acrobatic, at times almost death-defying, choreography brilliantly. The pas de deux between Clara the allerina and her Beloved Officer are sometimes exuberant and joyous, fluid, passionate and entwining, with some extremely difficult lifts contrasted with the quite formal Act 2 grand pas de deux between Clara and the Nutcracker Prince. The complex criss-crossing and patterns of Murphy’s choreography for the corps de ballet is also fabulous. The Snowflakes are deliciously fluffy and feathery, and the Waltz of the Flowers is rather more heavy and ornate (for the court), and the ballet dancers on stage are all in red and gold .

Tall, dark and handsome Jarryd Madden was terrific as the Beloved Officer and the Doctor – fine partnering and fabulous jumps. Andrew Wright as the Nutcracker Prince (looking as if he was the Prince out of the original Fokine Diaghilev Ballets Russes Firebird) was also extremely impressive.

Among the older dancers, there are delightful cameos from, for example, Colin Peasley as the Dance Master at the Conservatoire and Patrick Harding-Irmer as a pushy larrikin Australian reporter.

While there is no Sugarplum Fairy, no sugary Land of Sweets, no toy soldier who comes alive, this is sheer theatrical Murphy magic.