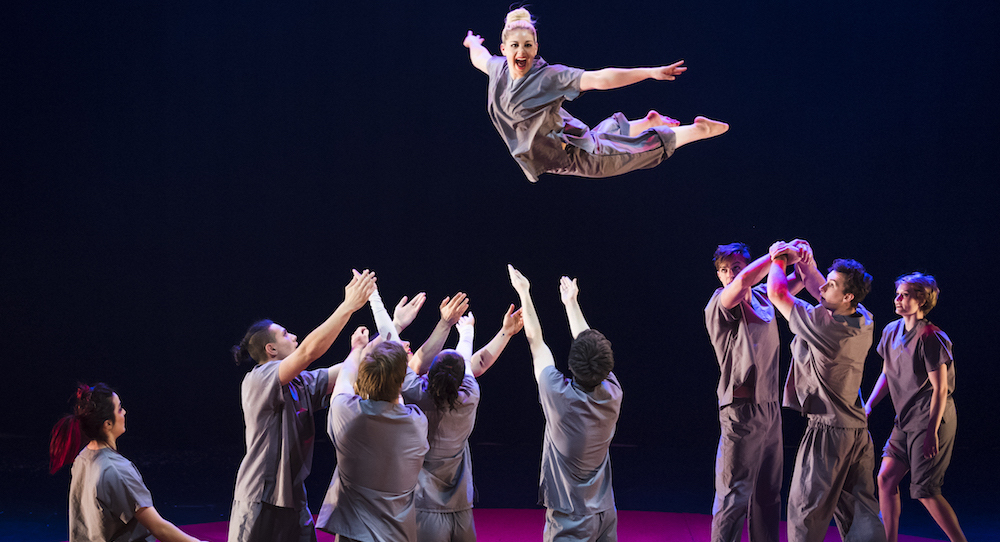 National Institute of Circus Arts (NICA) has been training circus artists since 1999. NICA is based in Prahan, Melbourne, and graduates from Australia’s only Bachelor of Circus Arts perform in circus and physical theatre troupes around the world. This June, students from NICA presented their graduating showcase, Circosis, at NICA National Circus Centre, Prahran.

Circosis is choreographed and directed by Kate Fryer, a physical theatre and circus director for more than 20 years. It loosely explores themes of left and right bias and preference.

Circosis features artists from the final year of the NICA Bachelor program. The cast is divided into two – the casts described as “Right Brain” and “Left Brain”. This review features the cast of “Right Brain”.

These artists have amazing circus skills. They each presented spectacular solo acts. In the first act, we were dazzled by Taylor Krasne on the Roue Cyr; Elise Jaworowski was assured on the rope; Jeff Young, a comic multi-talent, impressively juggled while also playing piano (well enough to disern the complex melody); an agile and dynamic Kamron McKinnon performed hoop diving; a fierce Sarah Berrell performed on cloudswing; and, finally, Ian Richardson performed a comic but impressive act of handbalancing.

In the second act, the performances were no less exciting. Katherine Martin joyously reached for her clown whilst performing on Chinese pole. She was followed by Jonathan Morgan, who possessed a quiet, steely presence and focus on the rope (and later the slackwire). Latonya Wiggington, ostensible on static trapeze, notably performed an affecting piece that was far more than tricks. Piri Goodman was strong, confident and winsome as a clown in aerial straps; finally, Ashleigh Roper performed assuredly with hula hoops. Kudos also need to go to the trainers behind these artists; they are emerging from their three years of training with real performance skills.

Whilst the need to provide young artists with solo performance opportunities is important, the most engaging parts of the performance were the group acts. Circosis Director Fryer has not only managed to frame some amazing feats from these young artists, but there was also some beautiful performance presences emerging and some delightful clowning. As a showcase, Circosis is very effective; as a piece of performance, it begins to labor under the form and rhythm required to fit in every artist’s solo act.

This season has finished, but don’t miss a graduating show next time. NICA artists are staggeringly good.