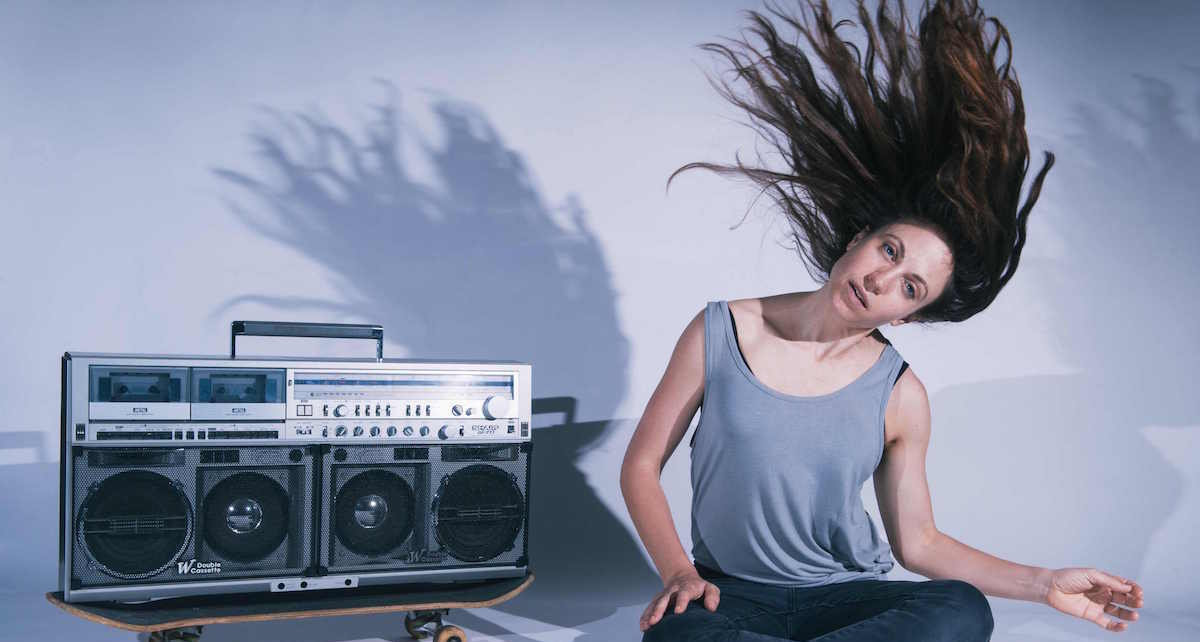 It begins with a man, a woman and a duck. With stones being thrown. “I was just yelling abuse at a complete stranger,” the woman admits. “I was amplifying a situation of violence with more violence.”

For the woman in question, Melbourne-based performance maker Nicola Gunn (famed for wordy self-deprecating works like At The Sans Hotel and Hello My Name Is), the sight of a man throwing stones at a nesting duck alongside a canal was the beginning of a personal and creative process. The result is her Green Room Award-winning solo work Piece for Person and Ghetto Blaster, which she will re-stage as part of Dance Massive in March.

“I found myself quite enjoying this very antagonistic altercation,” she reveals. “I got quite a lot of pleasure in yelling at this man; and that’s kind of what fascinated me. You know, how easy it is to cross that line into cruelty or violence.”

Given this, it is perhaps not surprising to learn that she also crosses performative lines. Not only is the Gunn oeuvre consistently “meta” of late, it has also blurred almost completely the line between theatre and dance. Her Chunky Move commissioned collaboration with choreographer Jo Lloyd, Mermermer, saw her move into the epicentre of Australian contemporary dance.

Of her evolving fascination with movement, Gunn simply says, “I just started hanging out with more and more choreographers and becoming really interested in their work and their process. I just really started to go and see more dance than I did theatre. I found it far more stimulating.”

In particular, her friendship with Lloyd has played a big part in weaving the “talking and dancing” together, grafting a strong physicality onto Gunn’s already vibrant and contoured body of text. “Jo started helping me with a lot of movement choreography for In Spite of Myself in 2013, and it was like this amazing simpatico because it was like I had finally found someone who understood me,” Gunn recalls.

Further forays into experimental gallery-based works sowed the seeds for their partnership and, in turn, ultimately brought both Mermermer and Ghetto Blaster to life.

With Ghetto Blaster now slated to appear as part of one of the country’s premier dance festivals, Gunn’s segue into the realm of contemporary might easily be thought of as complete. She would never, however, wish us to frame it in such absolute terms. “I never think of it as theatre or as a dance work, I just think of it as performance,” she says. “But, you know, it is completely choreographed. The movement is not arbitrary, and it’s very important to the dramaturgy of the work because it’s all about violence and conflict and what I kind of refer to as ‘unnecessary action’, and so it was obvious that this needed to be a work of absurdly unnecessary action.”

Nonetheless, as an artist renowned for her often hilarious, sometimes surreal and always revealing solo works, Gunn has a reputation for words, and plenty of them. In addition, anyone familiar with recent trends in Australian contemporary dance will also have noted the frequently clumsy and excruciating vogue for clunking “script and step” together. Their marriage is notoriously rocky, even token.

For Gunn, this is clearly a challenge but one she feels well placed to negotiate. “A lot of my text can appear quite digressive,” she explains. “I think I have a very conversational mode of delivery, and it can be quite random. But you know, I use a lot of rhythm when I make work, so it just feels like what I do is the verbal equivalent of dance. It’s like a series of abstract movements and you wonder, ‘why this movement?’ and ‘where are you taking us?’ and I kind of think I assemble words and ideas in a similar way.”

Yet, beyond the theatre/dance discourse is something far more elemental. Piece for Person and Ghetto Blaster prises apart personal and societal dilemmas around violence, passivity and morality. Indeed, in Gunn’s signature self-referential style, it looks at the heart of what modern middle class righteousness may well be becoming — a vent, a Facebook rant, a performance.

As she contends, “The ethics are really interesting because now, in my role as an artist, I’ve gone and made a work about this man and the whole situation, completely unbeknownst to him, so it’s ethically fraught.”

Perhaps here is where the less dogmatic language of dance is more useful and, maybe, profound. “I wonder at the moment if it’s a private language that we don’t quite get yet,” Gunn concludes. “One that’s just a lot more nuanced and subtle.”

Nicola Gunn’s Piece for Person and Ghetto Blaster will be presented as part of Dance Massive 15-26 March, at Malthouse Theatre. For tickets, visit dancemassive.com.au/program/piece-person-ghetto-blaster.