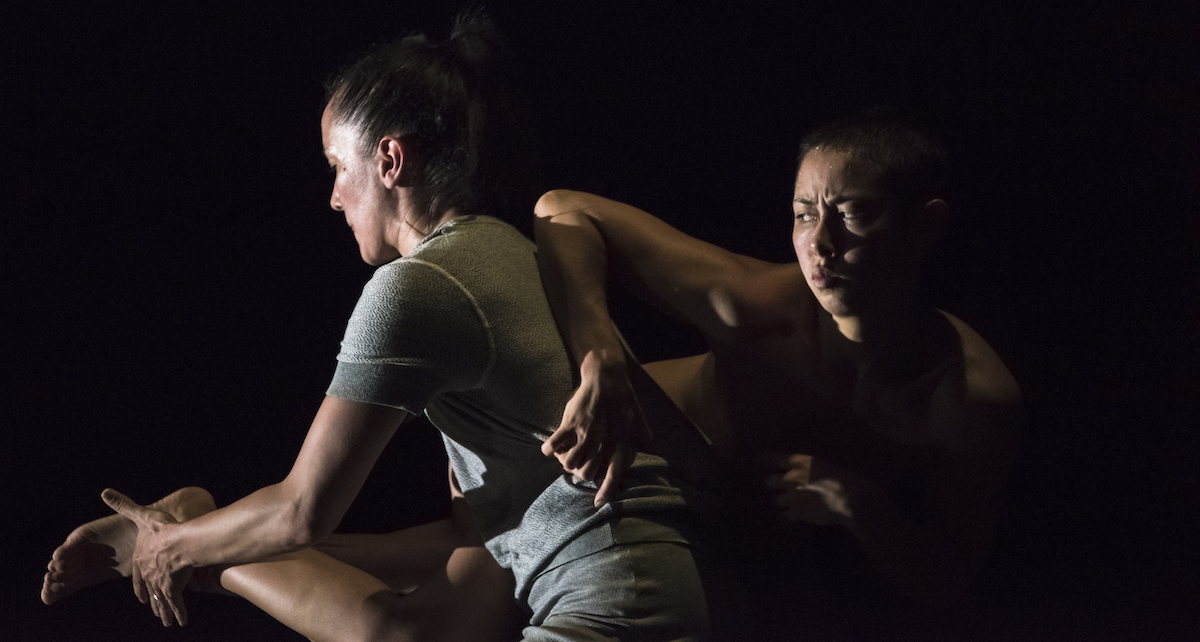 Lucy Guerin loves to deconstruct cultural phenomena in her work. In Spilt, presented as part of this year’s Dance Massive, Guerin seems to be attending to how time and space spends us, how we are measured (trapped) by the laws of time and space which we have constructed.

Split is a duet. It opens with the two dancers — Melanie Lane and Lilian Steiner — inhabiting an arena, marked by white tape. The arena is progressively split, bifurcated; the dancers lay down tape during the show, leaving themselves smaller and smaller space and time to work in. The dancers are forced to negotiate the depletion of resources of time and space. Sometimes, they are very organised and economical in their use. Other duets are painful and scarring.

The dancers are virtuosic in their relentless duet. The first 15 minutes of the work is an intricate and furious patterning of unison choreography, which they perform with ease and command. Each time the space is spilt, the duet switches between two styles of performance. Initially, the patterns of Guerin’s work that Melbourne dance watchers are familiar with, her singularly precise contemporary form, are sculpting space. Then, a different expression, with resonances in Butoh and performance practices that display codified and exaggerated forms of emotion, where the length of gestures in time is odd, and unusual emphasis is placed. This is a 50-minute duet, and the performances are staggeringly good.

Music composed by Scanner is repetitious and tribal, and creates an unassuming engine for the work to lean on.

Costume, too, is “split”. One dancer is elegantly and modestly clothed by Harriet Oxley. One dancer is naked for the entire work. The naked dancer confronts us with a multitude of questions: Can we escape the commodification of female bodies? How does the female body perform when it is not performing beauty or the erotic? Do we allow the naked female form to reveal strength and endurance? Is it allowed to be grotesque? How is it in command, and how is it defeated? We, as the audience, are ourselves made vulnerable by this naked body and its politicised challenges to us. The naked female body is a hugely contested site, and so perhaps here, too, we are “split”, in our opinions about how it is appropriate to represent or reveal this.

Split is a strong opening to the Dance Massive 2017 program. Highly recommended.