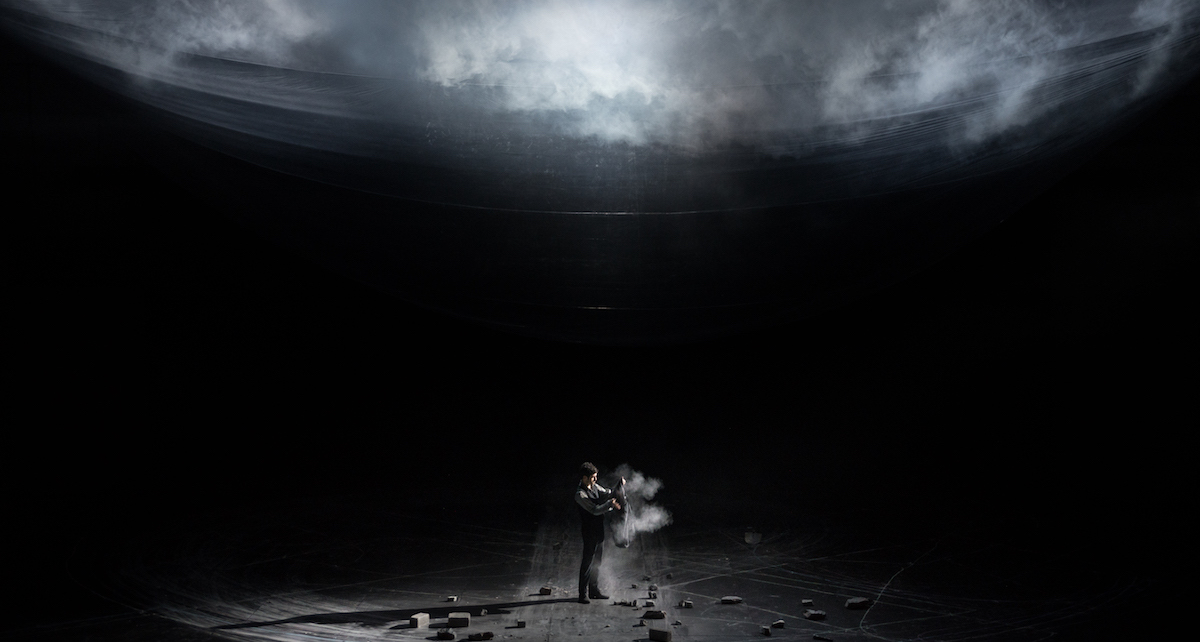 Still Life was created by the multi-talented Dimitris Papaioannou, best known for his work in creating the Athens Olympics opening and closing ceremonies. Papaioannou is a painter, performer, comics artist, choreographer and director, and it seems he brought the entirety of his skill set to this work. The work is based on the concept of the Greek myth Sisyphus, which describes a man who cheated death and is subsequently punished by the gods with eternal, repetitive labour. And thus goes the performance. A lot of repetition, in a form that could almost be described as a visual artist’s interpretation of movement…one visual picture that the dimensions of are explored over and over but essentially remaining the same, to a differing visual, with equal and lengthy exploration of dimension. There were about four main sections of the work, each emphasizing the repetitive nature of the concept, each going beyond a timeframe that would generally be considered comfortable for the audience. Essentially, making the viewer sit and truly be present in the moment – not an easy task for those embracing today’s hyper-paced world. 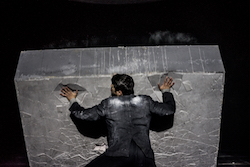 ‘Still Life’ at the Sydney Festival. Photo by Julian Mommert.

Although generally sparse, the lighting and use of texture within the setting was visually stunning. The use of greys, blacks, off-whites and beige added to the chalky smoke and clever use of lighting with barely a sound to be heard that was not performer generated. The lack of obvious soundtrack added to the despair and desperation that the repetitive nature of the work drew upon. The air did not need to be filled with sound, for the emptiness drew the audience in to the futility of each task, and the atmosphere was thick with it.

The work opened with a single man, who sits on a chair that gets removed, yet he remains sitting, with a cheekiness to his gaze. There are many moments similar to this threading throughout the work, where something that would normally be trusted as a support (stairs of bricks, a construction ladder) is suddenly no longer, and the dependent comes crashing down, only to have to start again elsewhere.

The first lengthy section includes a large block (roughly the size and thickness of a gym crash mat) representative of (covered with) slate. Almost all the set has the same earthy, raw material vibe – that gets chipped all over the stage to wherever it is dragged, and is brought center stage to endure men and women pushing through to the back whilst another pushes through to the front. Over and over, very interesting shapes with multiple limbs and odd twists are pushed through what comes across as an impenetrable barrier, and which limb belongs to who is often unclear – so the visual artist/choreographer in Papaioannou shines.

Other sections include a man holding a sheet of Perspex in front of a woman and shaking it, her dress billowing in a eerie manner, her face ghost-like. Another includes pulling tape up from the floor in lengths and patterns that seem to literally cover the entire floor but were not seen before this moment, almost as if to say, “You think you finished the task, but you didn’t see this one coming, did you?”, and it goes on for quite some time…again emphasizing the punishment of Sisyphus.

‘Still Life’ at the Sydney Festival. Photo by Julian Mommert.

The final, stunning moment was of a huge parachute that had gradually been getting lower with each new task – a clear plastic sheet that covers the stage roof and has cloud-like smoke within – is manipulated by one of the men with a spade, and he and his comrade sit to watch the effect of the ripple, this scene echoing a French theatrical style. This also happens many times but is quite beautiful and mesmerizing to watch.

At the conclusion, the men carry out a table laden with all kinds of food, set it in the space just in front of the stage on the ground level with the audience, and a feast for the perfomers begins. It seems an interesting way to end the show, but then they (must) get back to their tasks, and it begins at the beginning again.

Still Life may not be for everyone, as it requires a real patience to allow the work to unfold at its own pace. This piece is not intended to necessarily “entertain” in a way that we might be used to, but it certainly presents a unique experience, in no small consequence to the vast tool box with which the creator has within his skill set to draw upon. Considering the concept is essentially, eternity condemned to work, setting the scene and letting this idea really sink in, Papaioannou and his team achieve this with dexterity and profound maturity. The work is recommended for those who want to challenge their idea of entertainment and concept delivery.