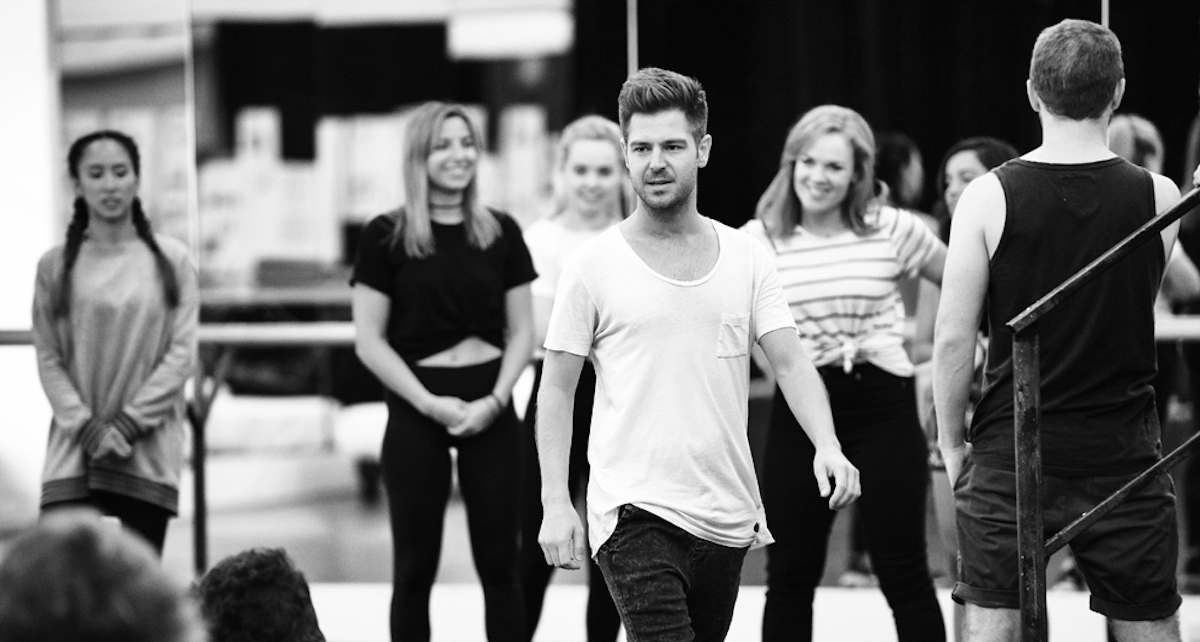 The fiery and award-winning musical American Idiot just opened in Australia on February 23rd at QPAC.

Including two Tony awards and a Grammy for Best Musical Show, American Idiot is a non-traditional musical featuring the music of the ever-popular band, Green Day. American Idiot focuses on three childhood friends who are finding their place in the world after the tragedy of 9/11.

Dance Informa was lucky enough to get exclusive rehearsal images and chat to Australian Choreographer Lucas Newland about working on the show just before opening night.

What drew you to choreograph for the non-traditional musical, American Idiot? And since you’ve been working on it, what are you most excited for audiences to see?

“Working with Director Craig Ilott again was a major draw card, we worked on Velvet together, and we have a lot of fun in the process. I had never really thought about choreographing a musical prior to this; I just didn’t know if it was my kind of genre. Then when I read American Idiot and listened to the soundtrack, I instantly knew that this was an incredible opportunity I wanted to be involved in – to work with rock music in a theatre format. I have always had a passion for choreographing ‘non-traditional’ styles. The more we delve into our rehearsals, the more I realise that this is going to be a really special piece of theatre. I can’t wait for the world to see and hear the cast. They are the most magically talented mix of humans.”

With Green Day’s punk-rock featured in American Idiot, what kind of movement can we expect to see in the choreography? Any moments of air guitar?

“So far, the movement is a mix between naturalism and stylised. It’s hard to define its genre, but I guess a mash-up of jazz, contemporary and theatre styles. There are intimate movement sections and some bigger ensemble numbers but rarely a neat structured ‘dance’ break. Sorry, no air guitar…yet.”

What was it like to choreograph to music you may have heard on the radio years ago, many times, and perhaps never thought to think of those tracks in a musical setting?

“I knew some of the main tracks that were radio hits, but I have quickly fallen in love with the entire score. I feel at home choreographing to this music; it’s so full of passion. There are definitely some numbers that require a lot more thought, but most of them flow quite easily. It’s strange now to think of the music not in a musical setting. It’s so story-like in its make-up and lends itself to heavy emotion.”

The musical deals with some very big issues. What do you think audience members who have never seen a ‘non-traditional’ musical will be shocked to see, or perhaps even relate to?

“There are some big issues in the show, but no bigger than what people are seeing on their news feed at the moment. We just have our big issues supported by awesome music.”

And lastly, you are a man with so many different hats and have (and are still having!) quite a career in the arts. How do you juggle it all as the Creative Director and Owner of Brent Street, and how do you keep motivated each day in a really tough industry?

“It’s definitely never boring. I have been very lucky with my work. I continue to pursue amazing opportunities whilst continuing to run Brent Street. The goal is always to remain focused, work hard, hold on tight, and enjoy the ride. Brent Street has the most incredible staff; they are all passionate and highly motivated. Employ people who are good at the job and love what they do — you can’t go wrong. They probably get more work done while I am not there to annoy them!”

For more information on American Idiot, including the cast, creatives and ticketing, click here.