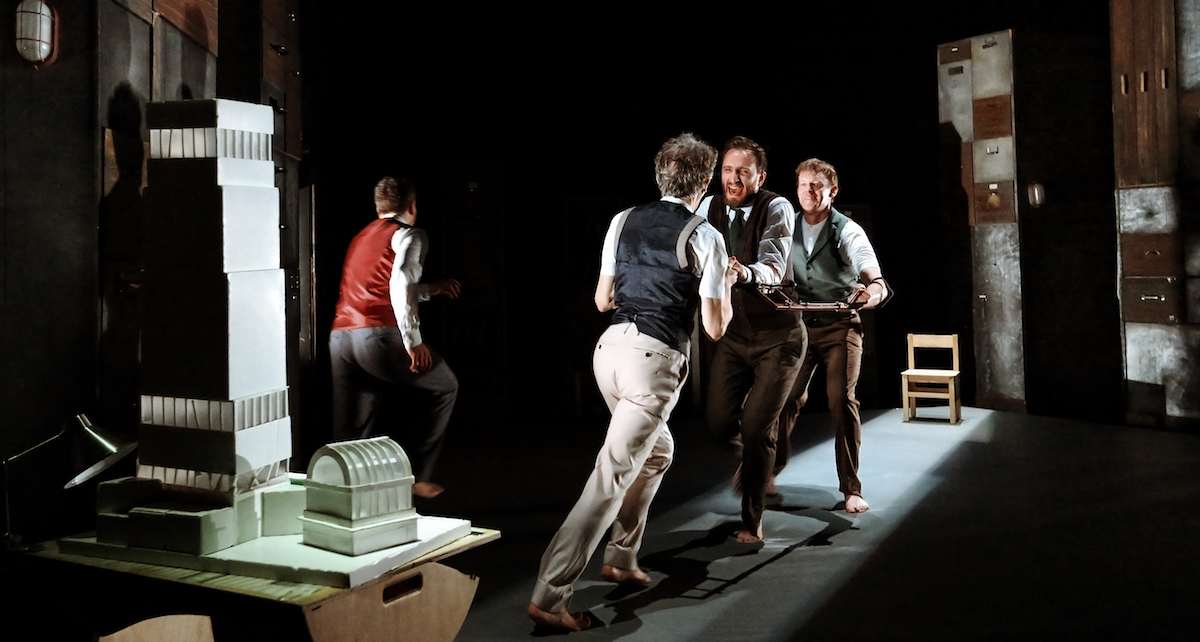 As part of this year’s Sydney Festival, we were brought Institute by UK company Gecko. The show first premiered in 2014 and was later seen at the Edinburgh Fringe Festival in 2015.

Institute examines mental health and the role of care (or lack thereof) in our society, particularly focusing on men, their differing relationships with themselves and one another in relationships, work and institutions.

The detailed, elaborate set, with its looming filing cabinets that can slide in and out, represent the compartmentalised masculine mindset – office slave, restaurant diner, husband, father. The opened files can hold exquisite miniature sets or hidden secrets we never learn.

Two workers, Martin and Daniel, mutter small talk and professional jargon to each other and to various bosses over the phone, but sudden beeps and harsh spotlights indicate perhaps a constantly observing and monitoring Kafka-like totalitarian state. Daniel manages to open a file revealing a fragile flickering stream of happy memories, but it also contains unfulfilled ambitions. Martin’s cabinet keeps repeating about a lost love, a broken marriage proposal. They start to obsess with these dreams and desires, which takes on a troubling aspect. Exploring the horrors of physical and psychological manipulation, Martin and Daniel battle with very modern anxieties and fears which perhaps overwhelm them. Stuck in a maze of officialdom, they lurch from one task to another. But who is giving the orders?

Eventually, we appear to be in a medical institute, as indicated by screens and forced medication, and the feeling that the men’s compulsions are out of control. Is it all a dream, surreally blending romantic segments with sickness, bullying bosses, comradeship, daily work practices, death, all at a very fast pace with abrupt and unexpected twists and moments of humour? And what is the significance of the “woman” trapped in the clear plastic box?

Visually, at times, Institute is ravishing. Chris Swan and Amit Lahav’s lighting ranges from chilling and snappy to warm, lush and glorious, the ending with a magnificent red-gold haze.

There are so many layers of meaning, but it is a challenging work that’s very hard to describe and classify. It isn’t really a “dance” work as such, or “physical theatre”; rather, it combines elements of these, with mime and speech, in an unusual blend of extremely demanding, lyrical and athletic action. There are perhaps allusions to the work of Pina Bausch and Hofesh Shechter. Some of the choreography takes everyday, tiny movements and repeats them. A couple of moments, with the use of angular elbows, the choreography implies that the cast are in straight jackets. There is a joyous, Broadway musical-like section at times. In another section, there is a rippling, pulsating, sculptural, undulating circle-like dance for all four of the tremendous cast who perform with a dynamic, sizzling fluidity and flame-like quality of movement. At one point, one of the cast is controlled, puppet-like with long levers/strings and struggles to break free. A running visual gag throughout is a red rose.

Institute is a most thought-provoking and intriguing work, one that is dazzlingly performed and that will lead to hours of discussion afterward.