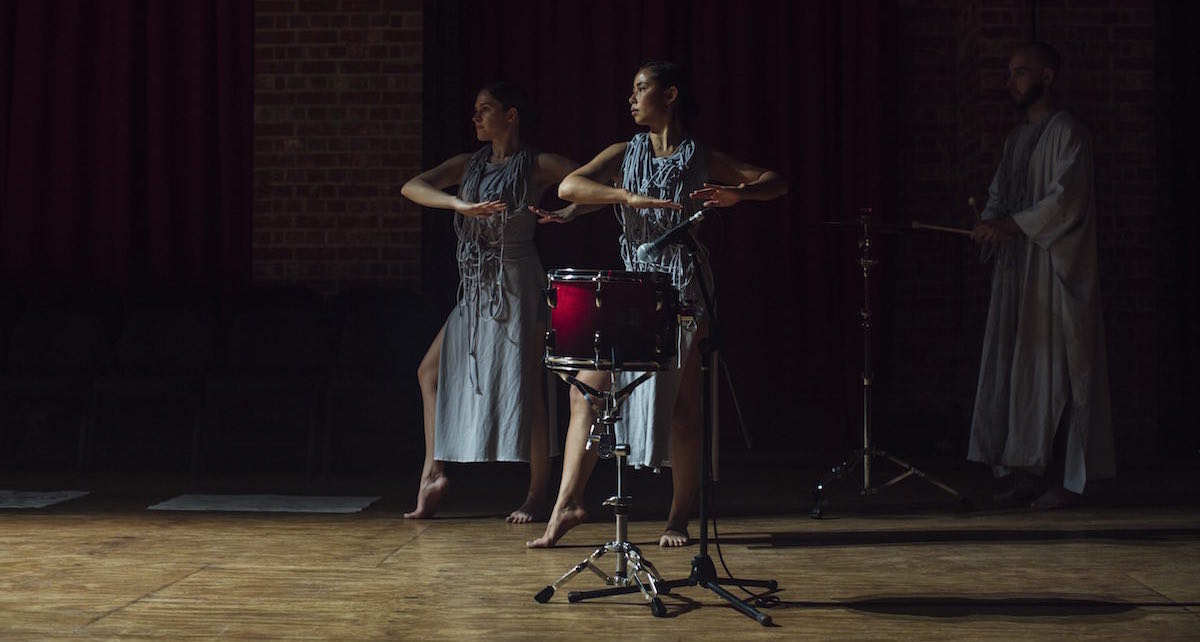 There is a space, right in the heart of scrawling chaos, which is quiet and calm. And in the wall of noise, a place of silence. This is the counter-intuitive space that artists and mystics have sought for millennia, and one to which Melbourne-based dance maker and yoga teacher Lilian Steiner is aiming to take her audience when she remounts her Green Room Award-winning work Noise Quartet Meditation at Dance Massive in March.

It’s a lofty, even spiritual ambition, but as Steiner explains it, “I was interested in the cosmic and the body — those two quite different things in terms of scale. So then I was looking at other binaries, like noise and silence, tranquillity and chaos, because I’m really big on binaries. Even as a dancer, I’m interested in the duality of qualities even within movements.”

With two dancers (Steiner and Brianna Longville) and two experimental sound artists (Jonnine Nokes and Atticus Bastow) on stage, Noise Quartet is both an exploration and an amplification of the subtle and cacophonous. Nokes and Bastow create sound and frequencies live using simple, identical drum kits, starting with quiet cymbals and building to a behemoth of noise.

“I’m drawn to the idea of noise music; you know, that kind of really intense percussion,” Steiner elaborates. “I mean, there’s heavy metal, which I don’t quite understand, but noise music is more experimental and almost more chaotic, but in the chaos there’s more space or there is some sort of calmness inside it.”

Noise Quartet has its origins in a short, 10-minute piece she made in 2012 for Lucy Guerin Inc (which utilised Voyager recordings from space), and Steiner insists that the idea of silence in the centre of noise “is one of the most beautiful dualities that you can have.” Rather than drifting off entirely into esoterica, however, she brings it back to Earth. “To relate it to an everyday situation, it’s like living in the heart of a major city, where you kind of have the option to be absorbed by the chaos or you can try and find ways to stall it.”

For its creator, the work has avowedly spiritual elements; this despite the fact that ‘spirituality’ in art is often tarnished by either the whiff of hectoring righteousness or the taint of tokenism. “I’m a yoga teacher as well, and I guess I’ve always had this interest in meditation and duality and a kind of spirituality,” Steiner says. “I’ve seen this in a lot of performance work, but in a kind of fake way, or just an aesthetic way. I don’t think I come at it through that lens but more from a place of genuinely wanting to unravel something about spirituality, but not in such an overt way.”

Curiously, given its deliberately meditative quality, the original iteration of Noise Quartet at Melbourne Fringe in 2014, came together very quickly. As Steiner recalls, “We really ended up making the work in about two weeks’ worth of hours in the evenings. It was pretty stressful and very quick, so I didn’t have time for too much second guessing. It was like, ‘What do I want to say, and how can we do that?’”

Steiner was aided in the making of the work, and indeed even able to bring it together so quickly, because she already had a “destination” in mind. “I already knew what I wanted the audience to experience,” she states simply. “Like, what sensation I wanted them to have when they left. So instead of working from the start, I already had the end point and I just had to fill in the gaps a little bit.”

With refreshing honesty, she also admits to battling with the clichéd aspects of examining binaries and investigating the meditative qualities of noise. It has, after all, been done before. “I felt like it might be a bit clichéd,” she reveals, “but I also feel like maybe it deviates from clichés just enough. You might be able to go, ‘Oh, that’s a bit like that thing’, but it isn’t what you already know. It’s slightly off.”

Either way, Noise Quartet Meditation offers audiences the opportunity to experience the still point in a storm of chaos, or at the very least suggests that this is a possible space for us to reach. In a world teeming with distracting spectacle, this may well prove to be a kind of quiet medicine.