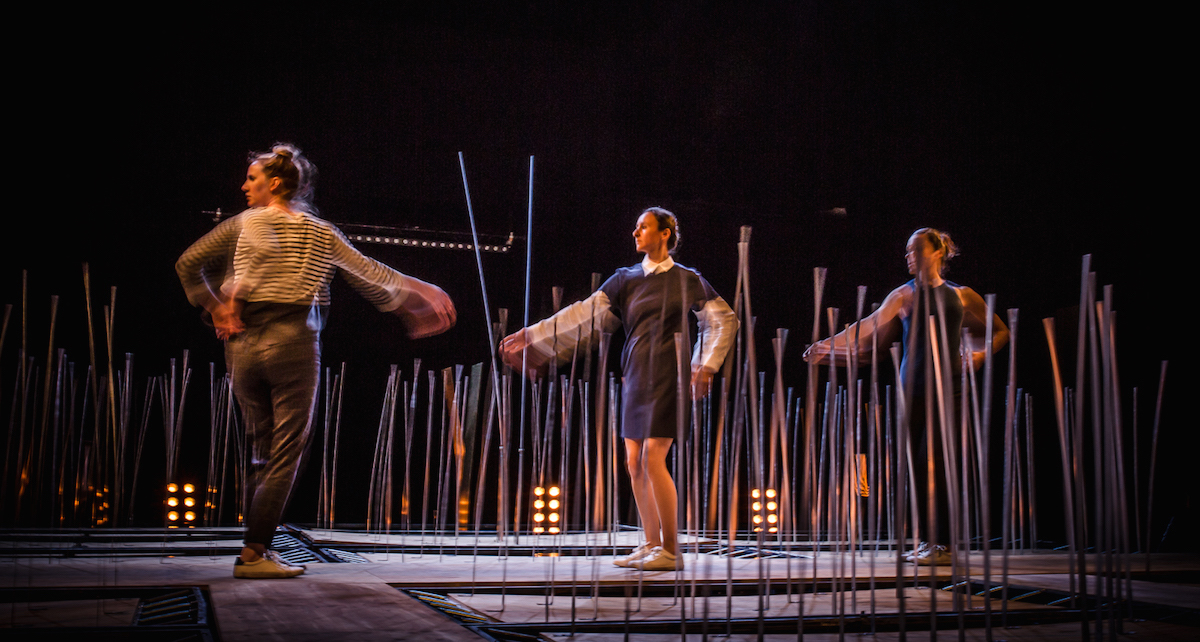 It’s trendy in dance circles at the hour to talk loftily of “the space”, and we might sometimes be forgiven for thinking that this is just the latest in a long line of cool but virtually meaningless motifs. With Ashley Dyer’s Tremor, however, the space truly is the star of the show.

By making his specially constructed, vibrating stage the focus of our attention, Dyer draws the space solidly into the performative realm. With 13 shake tables and over 200 flexible metal poles, the 8×8 metre platform is part installation, part dancer. Indeed, there are mesmerising sequences in Tremor where the stage shakes alone in the eerie light, as though in the grip of an earthquake, and where the pole clusters flex like Stalinist satellite cities moved by the seismic forces of history.

But there is more to Tremor than kinetic sculpture. By teasing out the idea of vibration, Dyer creates a pulsing, hypnotic experience. Principal dancer Kristy Ayre’s rhythmic rotational movements place humanity at the centre of a universe that moves to a beat. Although necessarily repetitive, Ayre breaks up the counts and gradually augments the simple circular patterns, creating a sense of momentum and evolution, or perhaps a sense of impending doom.

When Nat Cursio and Jo White join her on stage, that sense of spinning toward a cataclysm is increased, and an undeniable, throbbing tension builds toward its shaking denouement. That we finish with an empty wine glass, alone in a pool of light, juddering inexorably to the fall, is at once poetic, melancholy and funny.

Travis Hodgson’s smartly employed lighting shows admirable restraint, resisting the obvious stroboscopic temptations. So too Nigel Brown’s sound design, which eschews the clatter of percussion in favour of a menacing, low end throb that gives the whole thing a kind of ominous, pre-apocalyptic sense of inevitability.

Sure, Tremor could have had more bells and whistles and perhaps moved with greater urgency, but the overall meditative effect works well, lingering as it does on an uneasy line between tension and release. Taut, minimal and even audacious, it is a fascinatingly dry and conceptual work that stops just short of being too austere. It draws the audience into an equivocal trance, neither entirely comfortable nor totally disturbing.

In short, Dyer’s ambition of creating a work that could be dance, sonic sculpture or art installation is surely realised. Oh yes, and it will shake you up.