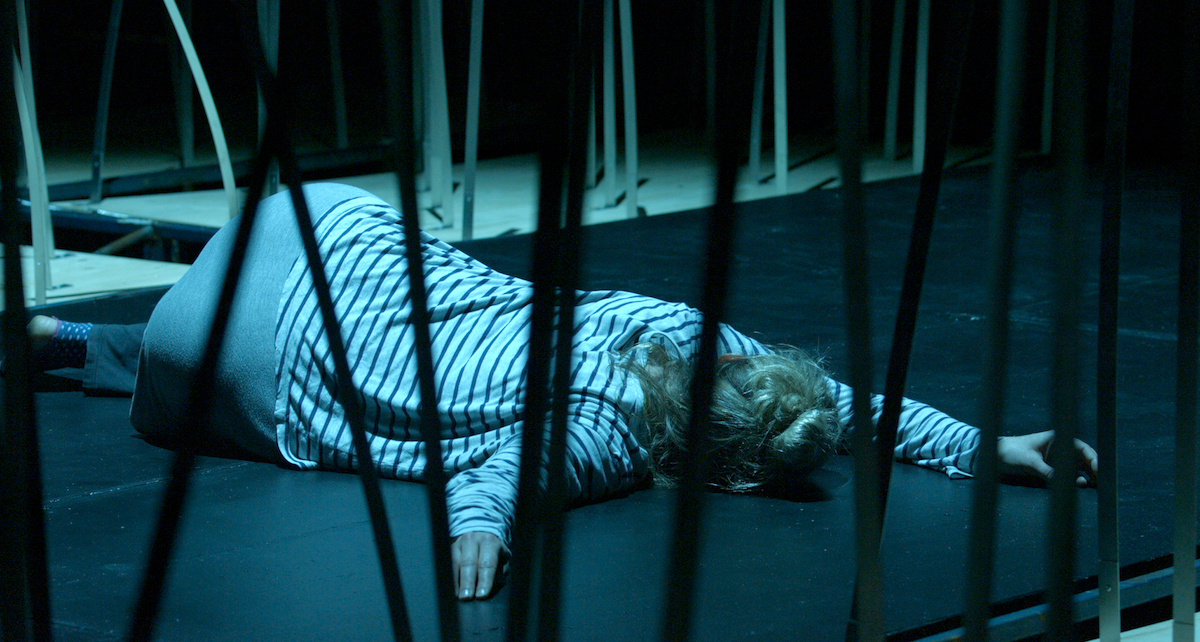 We are used to the idea that a dance work may take years to move from ideation to fruition, but it’s not often you find out that someone took 18 months or more just to build a stage. In the case of Ashley Dyer’s Tremor, however, the custom-built 8×8 metre platform is not simply a bespoke black box but a fundamental performative element.

With 13 shake tables and over 200 vibrating metal poles, the Tremor stage is a throbbing, pulsing invention built for three. Underscoring all the technical wizardry is a simple but enigmatic idea. As Dyer says, “We took vibration as the starting point.”

Of course, vibration can be understood in many ways, as indeed can “tremor”. Dyer’s ambitious vision is to try and unite the vibes through sound, movement and light. “We played with all kinds of things,” he reveals. “Like sex toys, children’s toys, video game controllers, mobile phones, sub woofers and stuff. We would dismantle some of them and attach them to objects or augment objects or just make things vibrate in different ways.”

In Tremor, the stage is both triggered by and the trigger of sound. This ingenious feedback loop creates an oscillating space of build-up and release, which is central to the show’s broader, more organic vision.

“There are two types of tremor,” Dyer illustrates. “The first is like earthquakes, or seismic activity, and the second is the sensual tremor, or like psychosomatic conditions; like when you shake because you’re afraid or you have some kind of disease or you’re excited. These two are linked by one more dominant thing, which is this idea of what a tremor means for both of those things. For me, it’s a build-up of tension or stress or pressure and the release of those things.”

For the dancers (principal soloist Kristy Ayre and her two co-stars, Nat Cursio and Jo White), this has necessitated a movement palette based on a hypnotic to and fro. “The dominant thing that we’re working with is oscillation — moving backwards and forwards around a central point,” Dyer explains. “So what we have is a body that rotates on its axis, and that axis is broken up in different ways.”

If it all sounds a tad arcane, there is, according to its creator, a clear unifying thread. “I’m trying to say something about the link between the body and the planet and how it might be feeling pressure or disease and how it might heal or destroy itself,” he shares.

Tremor was always envisioned as much more than a straight dance piece, however. Indeed, like its cleverly constructed, modular stage, it has been designed for multiple outcomes. Dyer uses terms like “trans-disciplinary” and “multi-artform” to describe it. In essence, this means that Tremor can be presented either as a 50-minute dance event, a durational performance piece, an installation for gallery spaces or even a sound sculpture. “What you’re seeing,” Dyer points out, “is just one iteration.”

As a piece of spectacle, though, Dyer admits that Tremor will perhaps be somewhat trance-inducing. “Because there’s a lot of fluttering objects in light, at points it can feel a little unsettling,” he says. “The space itself looks quite beautiful, and the effect is hypnotic. At times, it will be intense, but maybe not in a very tangible kind of way. I don’t think the audience will find it easy to place what they’re feeling and why they’re feeling it.”

With its constant layering and de-layering and vibrational sonic and visual grammar, Dyer is more than willing to concede that the work won’t be an easy read. “It’s definitely not for epileptics,” he warns. “It’s beautiful but at times sort of unnerving.”

Tremor will run from November 16 – 20 at Arts House Melbourne. For tickets visit artshouse.com.au.