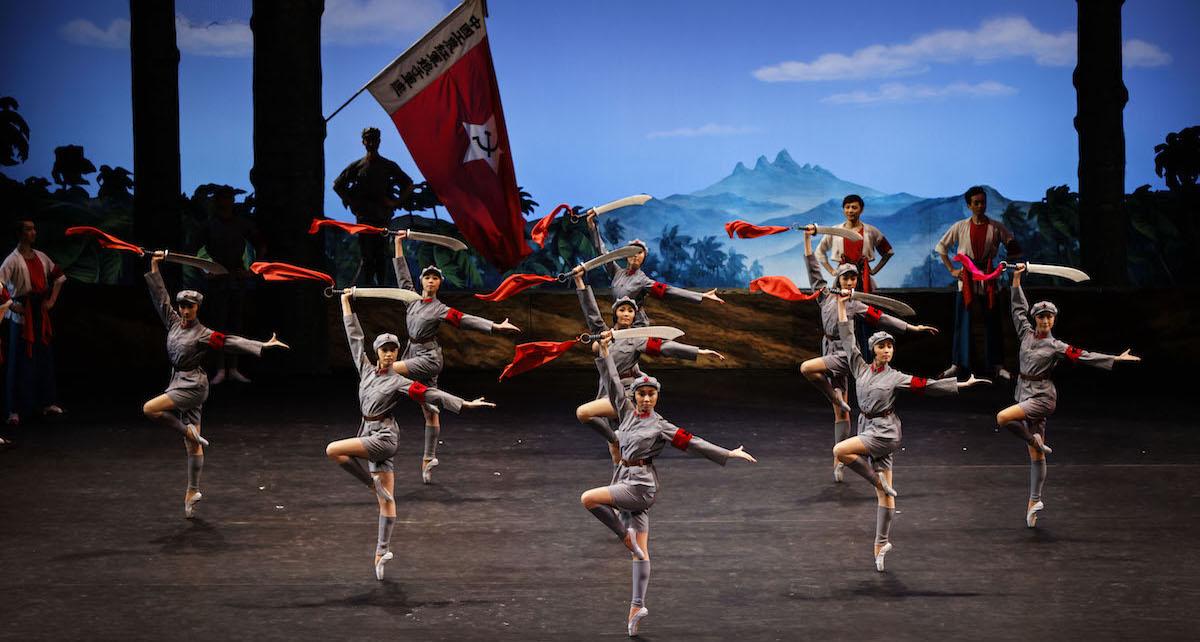 One of the world’s great ballet companies, National Ballet of China, will perform The Red Detachment of Women exclusively for the opening week of Arts Centre Melbourne’s Asia TOPA: Asia Pacific Triennial of Performing Arts.

The announcement was made in Beijing by Victorian Premier Daniel Andrews together with Arts Centre Melbourne CEO Claire Spencer, Madam Chen Chunmei of Chinese Ministry of Culture, and Madam Feng Ying, director of the National Ballet of China.

The Red Detachment of Women is one of National Ballet of China’s most popular works inside China, and the company was most recently invited to perform it at the Lincoln Centre in New York, and the Kennedy Centre in Washington, D.C.

Based on the popular true story of the 1930s all-female Special Company of the Chinese Red Army, The Red Detachment of Women’s story of liberation and just revenge is performed superbly by a company of 70 dancers and supported by a 60-strong Orchestra Victoria and 30-strong local choir.

Premier Andrews with dancers from The National Ballet of China. Photo courtesy of Arts Centre Melbourne.

“We are excited to be presenting this flagship production as one of our highlight programs for the inaugural Asia TOPA,” says Claire Spencer, CEO of Arts Centre Melbourne. ”In the years since its debut, The Red Detachment of Women’s distinctive, colour-saturated aesthetic has found its way indelibly into western mass culture to be amongst the most recognisable cultural works of the 20th century. This is Arts Centre Melbourne’s third presentation of National Ballet of China following The Peony Pavilion in 2012, and Raise the Red Lantern in 2010, and we look forward to welcoming the company back to Melbourne.”

“Melbourne has loved this important company with their earlier, exquisitely poised work,” says Stephen Armstrong, creative director of Asia TOPA. “Now we are absolutely thrilled to be hosting their foundational work – a work of living history.”

The ballet, which premiered on 26 September 1964, is a tale of heroic, Communist-led resistance to the forces of injustice and is the first complete ballet created independently of Russian involvement.

Based on the true stories of an all-female company of the communist Red Army, The Red Detachment of Women tells the heroic story of Wu Qinghua (pronounced Woo Ching-whah), a peasant girl on China’s tropical Hainan Island.

A powerful landholder, Nan Batian, captures Wu, chains her up and prepares to sell her. She manages to escape his evil henchman, Lao Si, but the tyrant finds and beats her, leaving her for dead before members of the Communist underground find and rescue her.

She studies communist ideas about guerrilla warfare, equality and peasant rights and trains as a soldier in a special detachment of women soldiers. The women soldiers ambush Nan Batian on the night of his birthday party. Wu, unable to control her hatred, shoots at him prematurely and although he is wounded, he gets away.

She is reprimanded for her lack of discipline and becomes a better soldier as a result. During a fierce battle with Nan and his men, Wu helps lead the detachment to victory.

The Red Detachment of Women remains one of China’s most popular ballets for both Chinese and western audiences. Set on the lush tropical island of Hainan, it is stylish and bold in design and has a distinctly Russian look.

Before the outbreak of the Anti-Japanese War of Resistance (World War II in China), the Communist Party led a number of popular rebellions against local power holders in the countryside. The power holders, officials and landlords, tended to support, and were supported by, Chiang Kai-shek’s Nationalist (Kuomintang, or KMT) government, against whom the Communists were leading a revolution.

In 1931, the Communists, who had established a base on Hainan Island, founded the all-female Special Company of the Second Independent Division of the Chinese Red Army. It consisted of more than 100 women. They helped to protect the Communist leaders, and were themselves protected and hidden by the local population when the Nationalists eventually re-established control.

After the Communist victory in 1949, Chairman Mao invited the company’s survivors to meet him in Beijing, where he showered them with praise.

In 1958, a historical novel by army writer Liang Xin (Heroic Flower of Hainan) brought the story to popular attention. In 1961, Xie Jin (one of China’s most famous film directors) made a film, Red Detachment of Women, which inspired further adaptations of the story, including film re-makes, stage shows, operas and ballets, including the opera Nixon in China.

Premier Zhou Enlai (1898-1976) came up the idea for a ballet version after seeing Jin’s film and suggested to the Central Ballet Troupe that they create a revolutionary ballet on the basis of the film.

The original dancers trained with members of the Hainan group during the making of the work. Alongside the military drill are traditional Hainan folk song and movement, and the ballet combines the highly stylized forms of traditional Peking Opera, with the highly idealised storylines of revolutionary propaganda, in which flawless heroes vanquish grotesque enemies.

The choreographers of the ballet had studied in North Korea, Russia and Eastern Europe. They managed to transform the foreign and unfamiliar art of ballet into something with strong domestic appeal, full of rousing songs and gymnastic athleticism, all in service of a simple and sympathetic story albeit with an aura of showbiz glamour.

The Red Detachment of Women was selected to be one of the “Eight Model Theatre Works” of the Cultural Revolution, one of the few officially sanctioned forms of culture during the decade of 1966-1976. The stories, themes, heroes and heroines of these works dominated the culture of that period. People who lived through it know them and The Red Detachment story intimately.

Choreographed by Li Chengxiang, Jiang Zuhui and Wang Xixian, with music by Du Mingxin, Wu Zuqiang, Wang Yanqiao, Shi Wanchun and Dai Hongcheng, The Red Detachment is the most artistically successful of all the hybrid creations of its type – one reason for its revival in China itself.

Arts Centre Melbourne in association with The Australian Ballet and Orchestra Victoria presents a National Ballet of China production:

Asia TOPA is a joint initiative of the Sidney Myer Fund and Arts Centre Melbourne, supported by the Commonwealth and Victorian Government.