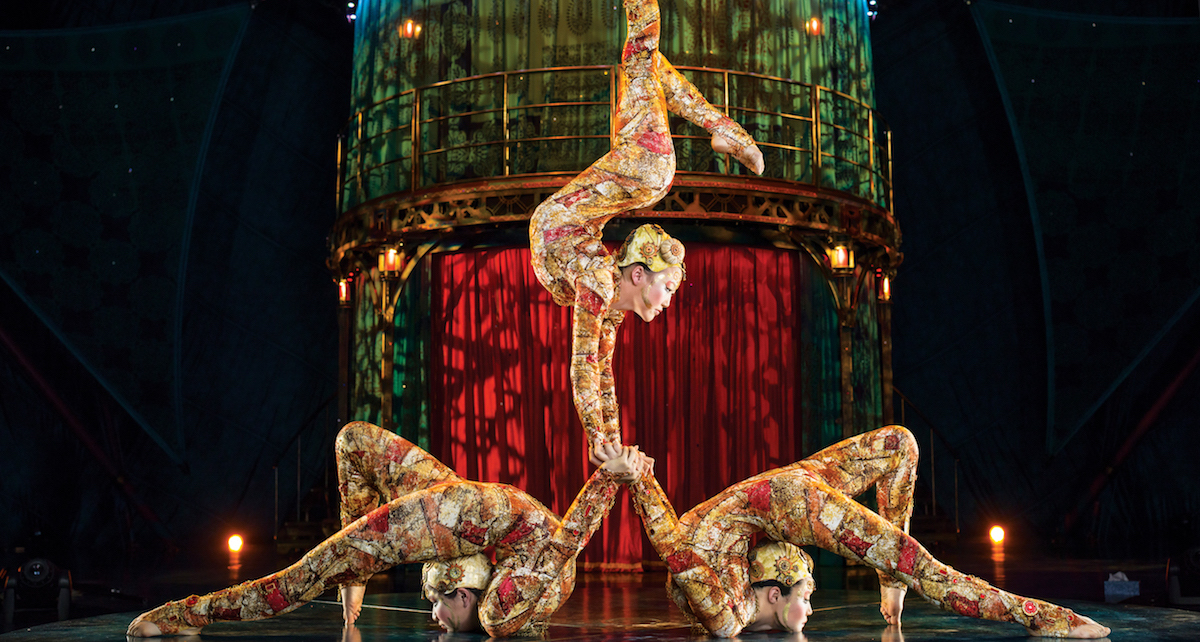 The Showring at the Entertainment Quarter, Sydney.

Kooza is such a fun show. Many years after commencing its vast circus empire, this show is Cirque du Soleil’s foray back to its roots, with bent-on traditional circus and a more raw, not so flashy, show that highlights the traditional circus skills of clowning and acrobatics. Created in 2007 by David Shiner, Kooza recently had its 3000th show in Montevideo, Uruguay.

The set makes a highlight of the trademark Cirque tent, with billowing curtains and a southeast Asian-styled Bataclan that serves as the music set and exit/entrance point for the performers. This particular stage is the tallest of any Cirque stage on tour, due to the height required for certain moments in the show.

Kooza has a bohemian atmosphere, and the daring abandon of so many of the acts reflect an early vaudevillian style. Kooza, derived from the Sanskrit word “Koza”, meaning “box”, “chest” or “treasure”, features The Innocent, who is drawn into a world created by The Trickster, for The Innocent to explore, with a myriad of quirky characters such as The King, who is a little nutty, and his underlings, The Clowns, who are even madder than himself.

It was really lovely to see clowning as one of the main drivers of the show — not just as a random thread throughout the show but instead as a featured series of acts that were key to bringing the show to life. The trio of clowns showed a beautiful maturity of performance, in an act specifically developed for Kooza, which brought added meaning and depth to their performance. It was such a delight to watch character and innovation develop throughout the performance.

Joseph Arrigo as The Trickster was flawless. He has such charisma and perfection in his performance, with an effortlessness in the way he executes every acrobatic trick, every stylized moment, that he almost makes the rest of the cast look like amateur performers. He is absolutely brilliant. In a role such as this, as the essential ringmaster, he must stand out, but when throughout the show there are moments of other faces lost in concentration, or just a moment of dropped character (it’s always interesting to watch those who are not in the pivitol moment of certain act), a performance such as this becomes even more outstanding.

Acrobatics with a twist (no pun intended) was also a feature of Kooza. The multiple upon multiple uniquely artistic flips were astounding and quite creative, which is a nice juxtaposition to the recent limited Olympic acrobatic vocabulary. The infectious smiles of the three female acrobats lit up the room every time they entered the stage. And despite a few mishaps in landing their still absolutely phenomenal tricks, their wonderful personalities won the audience over, and built up the fun and playful atmosphere that is the intention of Kooza. The only disappointing aspects of this act were the “in-between” choreography, which felt exactly as described, and also, in moments that were intended to be in-sync, each performer seemed to have such a different sense of the music. It was quite awkward to watch.

The unicycle was completely awkward from start to finish, which was a shame. It had a shaky start with a lot of straining effort, out of proportion to what effort was probably needed to pull this act off. The cyclist had moments of vivacious performance, but the female half of the duo was quite disappointing. She exuded utterly minimal stage presence for a professional performer. This was disappointing for being a world-class company with a reputation for exceptional performance quality. With a soundtrack reminiscent of an elevator at this point, nothing about this act was lending itself toward the extraordinary.

On the other hand, the reckless abandon and vivacity displayed by other acts left their mark. The aerial hoop, roue cyr, tightrope and wheel of death were truly amazing, attacking their performance with not a care in the world. This is what we would come to the circus for — to see daring, to see bravado, to see people push themselves to their very limits. This is what circus is all about, captured so skillfully in the aerial hoop and wheel of death in particular.

Although a little stripped back from your usual Cirque show, it was really nice to be taken back to the days of old school circus, with a touch of that Cirque flair that we know and love. Young and old will love this show, and all in the audience will find connection with one part of the fantastical world or another.  Whether you see yourself as The Clown, The Innocent, The Trickster, or more of a playful personality like the acrobats, you will find connection to the world of Kooza one way or another. It is truly a treat to witness the world of Kooza.

By Lynn Badger of Dance Informa.