“One of my ambitions when I began with Circa was to be to circus what William Forsythe was to ballet,” declares Yaron Lifschitz, artistic director of the renowned Brisbane-based circus arts company. “What I particularly loved about Forsythe’s approach at Ballet Frankfurt was he didn’t say, ‘We are contemporary dance and we can do whatever we want’; he said, ‘We are contemporary ballet and we start with the lexicon of ballet and from there we have to figure out how to make contemporary art from ballet’. I think that’s what Circa tries to do with circus.”

By wrenching circus away from big tops and mere spectacle, Circa has sought to expand the terrain that acrobatics can cover. When the company brings its revamped version of Italian composer Claudio Monteverdi’s famed 1641 opera Il Ritorno D’Ulisse In Patria (The Return Of Ulysses) to Melbourne’s Arts Centre in August, they will be doing much the same as the original creator — namely, blending styles to create something new. For just as Monteverdi straddled both the Renaissance and the Baroque and is credited with being one of the founders of opera, so, too, Circa situate their art in the blurred edges between forms.

“Circus is not a pure artform,” Lifschitz explains. “It always has music and clowning and acrobatics and other things, so the fact that we’ve decided to leap into the world of opera and classical music just sort of extends some of the range of those things, rather than veering into another ‘type’.”

Il Ritorno is a complex mosaic, with acrobats, opera singers, classical music, folk songs and new compositions and arrangements. Indeed, as the show’s composer/arranger Quincy Grant says, “There’s a real feeling of the central work, the Monteverdi, being the base, but from there it travels to grand orchestral down to quite focused and angsty solo cello. But you know, there’s also ukulele and piano accordion, the travellers’ music, that blends in as well.”

It’s a richly textured sonic palette for Circa’s acrobats to wrap their body around, and when it’s overlayed on the tale of Ulysses return to the island of Ithaca after 20 years of war and wandering, Il Ritorno seems more akin to epic poetry or classical ballet than circus. Lifschitz, however, is clear that the show does not deliberately co-opt motifs from dance. “It’s very difficult to define your relationship to something that can’t define what it is,” he argues. “I never approach the work through dance. There’s nothing designed to feel like dance. But there’s also a lot of dance for which the same thing could be said. There’s a lot of dance with acrobatics in it now.”

Aside from the finer points of defining artforms, Circa’s Il Ritorno taps into the big ideas embedded in the story. Having left his wife Penelope to run off and fight the Trojan War, Ulysses has finally made it back to the shore of his home island, having withstood the lure of sirens, lotus eaters and the magic goddess, Circe. Meanwhile, Penelope is holed up in the palace, tiring of keeping persistent suitors at bay after two decades of arid faithfulness. Onto this, Lifschitz has also mapped ideas culled from Primo Levi’s post-WW2 novel, The Truce. Themes of war, exile and return feature heavily.

As Lifschitz admits, “This show is fairly serious. It’s got moments of comedy in it, but it’s got this kind of heft to it that I think it’s exciting to see circus grapple with.” 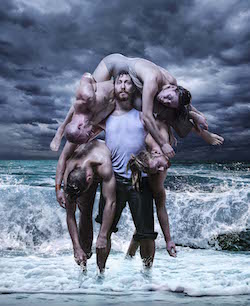 Circa in ‘Il Ritorno’. Photo by Damien Bredberg.

Musically, Grant has tried to tease this out. “We wanted to build a narrative of despair and anger,” he recalls. “Yaron gave me the challenge of saying, ‘Well, here’s where everyone has travelled through the war and so the horror has to be manifested physically’, so I gave them a piece of music that fitted with that.”

Of the movement, Lifschitz adds, “We developed physical languages that were very simple and quite resonant, languages about carrying people and resisting things, about hanging on. I wouldn’t say those languages became a choreography, because they’re not always evident from the set of moves, but they are evident in the generative sense because they distend the acrobatics in a way that gives them a particular flavour.”

So how does a 370-year-old opera written by a Catholic priest based on an epic poem composed over 2,500 years ago and blended with contemporary art-circ have the resonance its director speaks of? One answer is that war and displacement continue, as evidenced by the flow of refugees in Europe and the rancorous suburban fear mongering here in Australia over asylum seekers.

“These stories go back to ancient Greece and beyond,” Lifschitz observes. “Being exiled and homeless and displaced are part of the human condition. They weren’t invented by radio shock jocks.”

That said, Il Ritorno D’Ulisse In Patria is not refugee advocacy. For Lifschitz, this is a very important point. “If our particular style of circus becomes too explicitly political, it loses its force,” he says. “Our version of circus is not that good at being didactic, but Ritorno is very definitely influenced by that and don’t think any audience member who sees it doesn’t know what it’s about.”

In fact, Lifschitz insists that the show is more “like a road movie” than being expressly narrative or moral. Luckily for audiences, the Circa trip will be much more enjoyable than Ulysses’ 20-year ordeal and Penelope’s epic endurance. Phew.