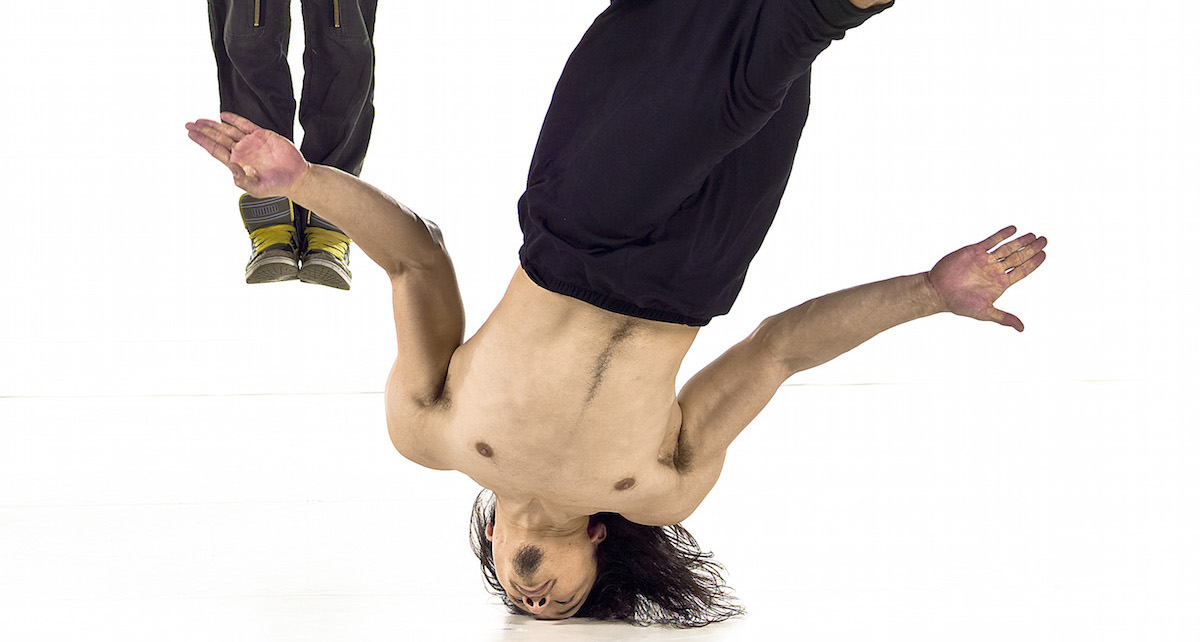 If you are one of those people who is not so sure about contemporary dance, the upcoming season of Ignition, presented by Australian Dance Theatre (ADT), offers you a smorgasbord of dance works where “you’re bound to like something and be moved by something”, as one of the five choreographers, Katrina Lazaroff, tells Dance Informa. “Sometimes if you go to see a single dance work, it might not be to your taste and you leave disappointed, but this program offers enough variety to stimulate all audience members,” she adds.

Adelaide is a relatively small town, and while there are in fact plenty of opportunities to see contemporary dance, there isn’t anywhere near enough opportunities for choreographers to create and present works and to get the kind of profile a world renowned company like ADT can offer. With arts funding dwindling at both state and federal levels, lack of money, support and marketing are some of the biggest hurdles for independent dance artists. To create work, choreographers need a budget for rehearsal space, dancers’ wages, associated artists (such as sound and design artists), production personnel, marketing, theatre hire and more. And then there is the need for artistic feedback, advice, discussion and revision.

And so the news that, following a five-year hiatus, ADT’s Ignition is returning in July was welcome news for the SA dance community, and there are five choreographers who will have the opportunity to work with ADT’s world class dancers and highly experienced production team, to have their work promoted by the company, to have it presented in a theatrical setting, and to have a budget to work with lighting and set designers, and, perhaps most importantly, mentoring and artistic collaboration with ADT.

Ignition was first introduced by ADT’s Artistic Director Garry Stewart in 2000 and ran annually for a decade, with the last season held in 2010. The program gave a number of notable choreographers one of their first, or most significant, opportunities to develop and practice their craft and have the results performed in a theatrical season with high production values. The retinue of names include Tanja Liedtke, Ross McCormack, Antony Hamilton, Daniel Jaber, Larissa McGowan and Lina Limosani.

Speaking in a video published on ADT’s Facbook page, Limosani and Jaber both describe how important Ignition was for their choreographic career, and how exciting it was to be a part of it.

“Early Ignition seasons played a huge role in my desire to keep exploring my voice as a choreographer,” said Limosani, who was an original member of Stewart’s ADT and has since gone on to work with numerous national and international choreographers, and was selected as one of six choreographers for the Swiss International Choreographers Project in Zurich.

“We all took our first steps as creators with the Ignition seasons,” she continued. “I think we blew ourselves and each other away with what we were actually capable of creating. We all took these seasons really seriously, as it was our only opportunity to explore our own artistry and explore those bubbly creative ideas we had coming up in our own imaginations.”

Jaber took part in the 2006 and 2007 Ignition programs, and went on to become Creative Director of Leigh Warren and Dancers in 2015, and is now based in Los Angeles working with his own company, Daniel Jaber and Dancers International.

The work Jaber presented in the 2006 Ignition program was entitled “The World’s Smallest Stage Invaded” and went on to be nominated for an Adelaide Critics Circle Award for Emerging Artists, and his 2007 piece, “Snake Bite”, toured through regional South Australia.

“It was really such a rush to get my work seen by South Australia outside of the metropolitan district,” recalls Jaber.

In 2011, ADT introduced Rough Draft, which gave independent choreographers the opportunity to present new dance works at quite early stages of development, for feedback and input, in a studio setting.

Elizabeth Old, associate artistic director at ADT, says that the company has re-introduced Ignition because the time seemed right, and there was clearly a need for choreographers to take their work to the next level. Ignition does this by shifting the presentation from the studio to the theatre, giving choreographers a small budget for lighting, costume and set design.

Old says that the season is aimed at providing an opportunity for emerging and mid-career choreographers. This year’s Ignition has five dance works inspired by the theme of history, set by ADT’s Stewart. The program features four short, 10-minute works by ADT dancers Thomas Fonua and Matte Roffe, and independent choreographers Katrina Lazaroff and Erin Fowler, and a 30-minute commissioned work by Limosani, whose work “One’s Wicked Ways” is a second stage development set in the Baroque period. The work is described as “wickedly funny and slightly disturbing piece” that features physical theatre, baroque wigs and makeup, ropes used as props and even as a pas de deux partner.

Fonua’s piece, “The Village”, is a development of a work that was featured in ADT’s Rough Draft in 2015 and is inspired by Fonua’s Pacific Islander heritage. The work harks back to the 19th century when Samoan men, women and children were paraded through Germany as part of a human zoo. The work explores themes of exhibition, captivity and exoticism.

Lazaroff, who has already created three full-length works independently (Pomona Road, Involuntary, and Wasted) is presenting “Caught in Past Tense”.

“The piece plays with the notion of speech and action being caught in the past,” Lazaroff describes. “The movement style is glitchy, fast-twitched, as if the dancers are getting yanked back in time.” Lazaroff’s work has a style that is highly accessible and humorous, more dance theatre than pure dance, featuring plenty of text along with dance and movement, and it appears this work will be no exception. “There are moments in the work that are funny, exploring a silly play on words, and other moments that are quite personal and evoke a sense of memory and intimacy in our individual past,” she adds.

On why she thinks Ignition is such a great opportunity, Lazaroff says, “It’s always wonderful to be profiled as a choreographer with a company that has a national and international profile, and to be acknowledged as a local choreographer, and to be profiled amongst a great bunch of choreographers. But the real highlight was having the opportunity to choreograph on six ADT dancers. They are an exceptionally high standard and have a beautiful sense of engagement and connection to what they do, and passion. In the past, choreographers in Ignition have used their own dancers, so it was fantastic to work with the ADT company dancers.”

Lazaroff herself was involved in the first season of Ignition in 2000, as a dancer in Ingrid Voorendt’s work. “It was a beautiful experience, and we had a real sense of an independent vibe,” she reflects.

“Funding is next to nothing these days, and while I’ve created my own full-length and short works in the past, I’ve really been struggling to get things up to length and presentation quality without funding,” she says. “It’s important that Adelaide-based choreographers are being profiled, as well as emerging choreographers in the ADT company. We have a significant independent dance community in Adelaide who make work and don’t often get profiled on a national level, and I think this will help that, as well as offer support to the local dance community. ADT has been doing this with Rough Draft, but it’s nice to have two options, and to have the production values offered by Ignition.”

Like Lazaroff, Fowler says one of the most amazing things about being involved in Ignition was working with the ADT dancers.

“The chance to work with such skilled dancers is really exciting for me, and not something I have access to very often,” she shares. “They are so quick and so able to take an idea and run with it.”

She continues, “Being involved in Ignition is also an endorsement, in a way, by ADT, which means a lot at this point in my career, as well as access to marketing and audiences. Trying to get people to see my work on their own is a lot harder without the support and structure of a company like ADT.”

In responding to Stewart’s theme of history, Fowler says she started thinking about personal histories and how we retell stories or events through our own bias.

“I’m looking at the psychology of history and how it’s always told from one perspective, which then got me looking at coming back to something I’ve worked with before in my work – looping and cycles and repeating the same patterns,” Fowler explains. “This lends itself well to choreography. Since I’m a musician, I was interested in drawing out patterns in music. I think history and time go hand in hand with music and dance. They happen in the moment, then you remember them and construct memories from them.”

Ignition has given Fowler a welcome opportunity to focus more on her own work. As one of the co-directors of The Mill, an artistic co-working space and not-for-profit organisation that delivers programs for dance and visual artists, Fowler has found that her own artistic practice gets neglected.

“I’ve been working on The Mill for two years, and over the last six months it’s been exciting to focus more on my own work,” she says. “It’s given me the momentum and a bit of a confidence boost, and I’ve been rediscovering my passion for dance. Any opportunity to keep making work is great, and if something comes from that, it would be great.”

Ignition will be performed at Adelaide College of the Arts from 9 to 16 July. Tickets are available from www.trybooking.com/LCBC.